As climate change intensifies, architects, designers, and scientists are devising better ways to deal with almost anything nature throws our way.

Record-breaking hurricanes, historically bad fire seasons out West, unprecedented flood levels in the Midwest, and “bombogenesis” becoming a household word along the Eastern Seaboard: Devastating weather events are the new normal in nearly all areas of the United States. Climate change is causing both more-frequent and ­more-severe calamities. Add to that ongoing threats from earthquakes, ­tornadoes, and volcanoes, and it’s no surprise that, according to NOAA’s National Centers for Environmental Information, natural disasters cost us more than $306 billion in damage in 2017. But a new generation of ­architects, designers, and experts is creating infrastructure and buildings that respond to both extreme conditions and ongoing stress. Here’s a look at some of the most ­innovative approaches to living in an ­increasingly apocalyptic world. The fog collector Challenge: Drought Location: Mt. Boutmezguida, Morocco

Some residents of ­Morocco who live near the Sahara used to spend hours ­every day retrieving ­water by donkey, but a new fog-​­collecting system is changing that. The ­Aqualonis Cloudfisher’s sturdy ­fabric mounts onto frames and can resist ­74-mile-per-hour winds while collecting moisture from the frequent mountain mist. This drips into a 16-mile pipeline, then flows directly into taps in more than 70 homes. Though people have erected similar systems in South America, Aqualonis claims Cloudfisher is the first to withstand stronger gusts. Innovative ­drinking-​­water solutions will gain importance as climate change alters rain patterns across the globe.

2012’s Sandy was one of the deadliest hurricanes in New York City’s history. More than half of the 43 people killed were on Staten ­Island, where tidal surges as tall as 14 feet swamped the coastline. As the waters retreated, a federal task force held a competition to figure out how to best protect the area from future tempests. Living Break­waters, one of the winning designs and led by architecture firm SCAPE, plans to tame the waves along the borough’s south shore with a 4,000-foot ­necklace of rubble, stone, and concrete barriers. The structure will also encourage ­protective ecosystems, including oyster beds, which form natural reefs.

Fire season has expanded in the U.S. by about 78 days over the past several decades. While experts say that not living in flame-prone zones is probably the best way to minimize risk, for people who already live there, some easy changes will improve their property’s likelihood of making it through a blaze. One of the best is to lessen the number of combustibles near their homes, says Patricia Champ, an economist at the U.S. Forest Service’s Rocky Mountain Research Station. Use less-​flammable roofing material, such as asphalt shingles, clay tiles, or aluminum. (Some of these happen to be among the cheapest options out there.) Trimming or removing trees and vegetation near structures also makes a big difference, she says.

Higher concentrations of carbon dioxide in our atmosphere actually accelerate deterioration of concrete. As CO2 penetrates a structure, it reacts with already present moisture and calcium hydroxide, progressively eating away at the layer of cement covering steel reinforcements, leaving them vulnerable to rust. Fortunately, Henk Jonkers, an environmental scientist at TU Delft in the Netherlands, has invented a self-​­healing version. Jonkers embeds concrete with nitrogen, phosphorus, calcium lactate, and a ­limestone-​­producing bacteria. The additives lie dormant until a fissure emerges, admitting air and moisture. Then the bacteria activate, feeding on the calcium lactate, converting it into limestone, and sealing the split.

Electric cars that back up local grids

It turns out that cloudy, windless days don’t yield much renew­­able ­energy—​a road­block in shifting power grids away from fossil fuels. But electric cars, which are essentially ­batteries on wheels, might accelerate a solution. Their drivers could be ­encouraged to use their vehicles to stabilize the grid by rewarding them for storing extra power. While owners are working during the day, their vehicles can charge on energy from solar farms, and later, parked at home, earn their owners a little cash by selling surplus juice back to the grid. Alternatively, since wind typically blows harder at night, electric cars can store this fleeting power and release it the next day. Networked car batteries could thus provide stability to local networks, lowering the possibility of blackouts, not to mention providing their owners with emergency power. The potential impact is surprising: In a recent paper, researchers at the Lawrence Berkeley National Laboratory suggested that California’s aggressive ­policy—​requiring 33 percent of its energy to come from renewables by 2020—can be met simply by using electric vehicles as storage. Doing that will also lessen the need, and cost to taxpayers, to build stationary storage infrastructure.

Cities are dense with impermeable sidewalks and streets, so the concrete jungle doesn’t exactly drink up excess ­water during storms. The result: destructive flash floods. To help, Danish ­architecture firm Tredje Natur developed Climate Tiles, a modular paving system that ­collects and distributes rainwater. The slabs ­resemble a normal paved surface but sport small perforations that funnel storm runoff into horizontally connected ­channels. The ­system captures water from roofs, streets, and parking lots, and delivers it to nearby permeable landscapes—such as garden boxes or park spaces—where it can be ­absorbed. Tredje Natur already gave a few Copenhagen sidewalks a face-lift this year to test out the tiles. But even before that experiment is finished, Toronto and several other cities have put in requests for the rain-draining material. Here are three ways the system diminish flooding:

1. Feed the flora Plants offer many perks to city dwellers, including shade, beauty, and habitat for wildlife. But they also drink up water that might otherwise flood busy streets.

3. Remove waste The Tredje Natur system keeps storm runoff from mixing with everyday pollutants like road salt, fertilizer, and sewage, ensuring that plant life gets only the best.

On a calm Sunday in 2011, one of the deadliest twisters in U.S. history, an EF5-rated multiple vortex storm, tore through Joplin, Missouri, killing 161 people. Afterward, as the city rebuilt, Toronto-­based Q4 Architects ­designed a concept house that shows how homeowners might better survive—and recover more quickly from—such disasters. Here are three essential featuers:

1. Strong on the inside Called the CORE House, the building is constructed around a central space made of well-anchored concrete that would meet Federal Emergency Management Agency standards for “near-absolute protection.” All the critical needs of daily life—a place to rest, cook, and use the bathroom—are protected here. Surrounding rooms feature traditional comforts such as larger windows.

2. Restoring function Municipal infrastructure often takes a while to come back online after natural disasters. So Q4 has built photovoltaic panels and water-­harvesting systems into the safe house to provide emergency backups. The peri­meter has openings strategically ­located to withstand gales but large enough to help keep the home cool.

3. Carbon neutral Considering your building’s long-term impact on the environment is a key component of resilient design. So Q4 built its house with an eye toward being easy on the planet. A custom blend of concrete sequesters carbon emissions, and all the other materials are made within 500 miles of the site.

It’s surprisingly difficult to prove fire resistance in materials—mostly because it requires making a real-world-strength blaze without burning down your lab. So Samuel Manzello, a researcher for the National Institute of Standards and Technology, helped develop what he refers to as “The Dragon.” (Formally, it’s called the NIST firebrand generator.) Investigators fill the 12-inch-­diameter, 5.5-foot-tall tubular contraption with wood chips, which are ignited by two propane burners. Used in combination with one of the world’s only fire-research wind tunnels, located in Tsukuba, Japan, testers can create firebrands that move at 32 feet per second. This allows researchers to simulate natural conditions such as wind-driven wildfires that rush into urban areas. NIST used the Dragon to support improvements in roofing to resist ignition, and to suggest changes to California’s fire code by testing the mesh size used to keep embers from entering building vents.

Standing up to quakes

Perched on one of the most seismically active tectonic-plate junctions, Japan registers more than 1,500 earthquakes every year. Architects there have pioneered new engineering standards to stabilize even skyscrapers. For example, Mori Tower, one of the tallest buildings in Tokyo, contains 192 oil-filled shock absorbers throughout its 54-story structure. A sensor inside these steel dampers detects small shudders and controls the flow of the fluid; when an earthquake is detected, the dampers slosh a thick oil in the opposite direction to counterbalance the tremor. The Japanese continue to push seismic technology’s boundaries, engineering dampers out of everything from isolation bearings to high-tensile carbon fiber.

As Hurricane Harvey demonstrated in 2017, huge swaths of the U.S. are increasingly prone to severe storms that knock out power and flood hundreds of thousands of homes. Architects have taken note, creating new types of floating and amphibious homes worldwide. Here are three of their protective features: 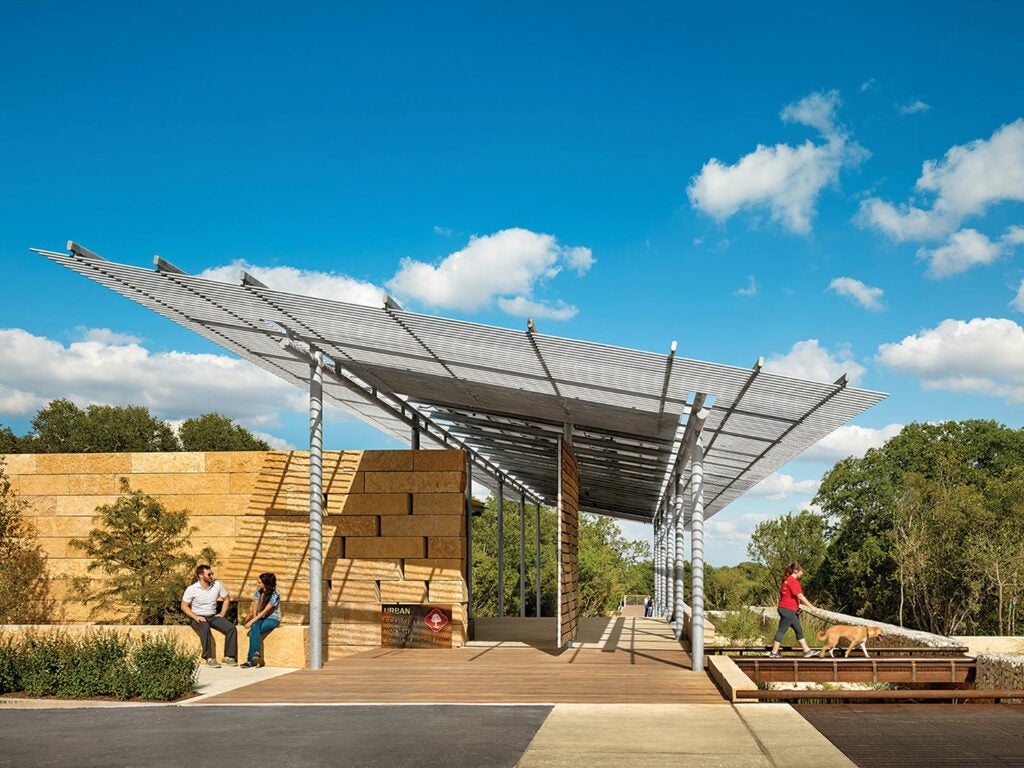 A park revives an old way to conserve water via acequia (at right).

Hispanic settlers brought a system of ­water management to the New World that is seeing new use as our climate changes. Called acequias, these networks of earthen canals traditionally branched out like arteries from rivers, some even allowing excess water to seep underground, where it could be stored for months. With reservoirs increasingly at risk for evaporation due to global warming, the U.S. Department of Agriculture’s Natural Resource Conservation Service began funding acequia infrastructure projects in 2015 as an alternative. San Antonio, Texas, recently built a modern adaptation in Phil Hardberger Park, where the system captures and diverts storm runoff from a parking lot. Lauren Stimson, one of the landscape architects behind the project, says it uses plant roots and sediments as a natural filter, collecting and storing runoff the way the region’s farmers did historically.

Cities aren’t the only places floods impact. Low-lying areas can be fertile sites for productive farms, yet they’re susceptible to deluges. Mangroves could be an incredible natural defense mechanism against the rising waters, with a dynamic root system that aerates soil while holding it in place, reducing erosion and increasing ­drainage. But in many places, these natural ecosystems have long since been destroyed. ­Hungarian design collective Szövetség’39 brainstormed a modular, lacelike concrete structure to act as a base for mangrove saplings, which often have trouble getting established. The man-made foundation is designed to support the trees until they form a natural dam, then it slowly degrades beneath the water-​­stopping grove.

After a calamitous earthquake and tsunami in 2011 led to meltdowns at the Fukushima Nuclear Power Plant, nearby towns applied the catastrophe’s lessons to their recovery efforts. Unlike many places that rebuild systems sure to fail again, the town of Higashi-Matsushima, which has a population of nearly 40,000, plans to put the city on a localized, renewable grid. For ­instance, the government converted a damaged park into a solar facility capable of producing enough energy for 600 families. And the town, which was 75 percent destroyed, has also constructed a smart microgrid with battery backup that can supply electricity to the entire area for several hours, or redirect it to hospitals and community buildings for several days. ­Twenty-five percent of the municipality’s power is already produced locally.