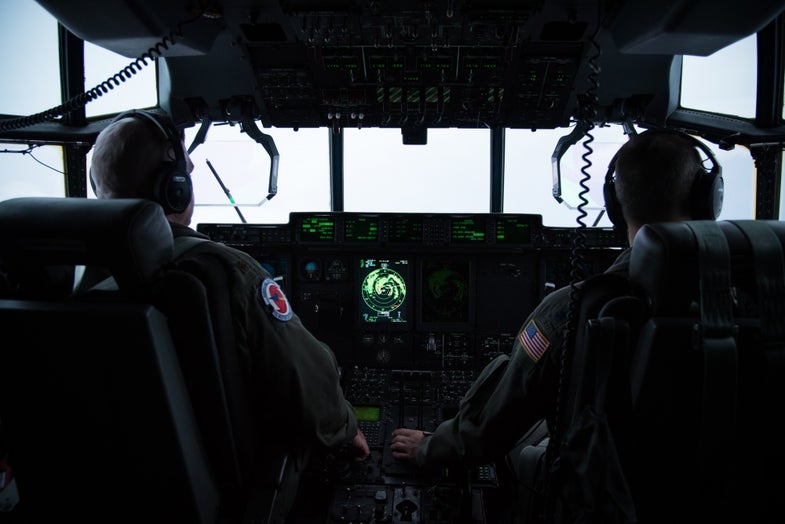 An Air Force unit celebrated the start of hurricane season early this year, with a flight over the Yucatán Peninsula at the end of May to penetrate the heart of subtropical storm Alberto.

“There aren’t many people that fly into hurricanes,” says Major Chris Dyke, an Air Force meteorologist. But he’s one of them.

Leading up to the peak of hurricane season, scientists predict the number and intensity of storms to wallop the coast, using information from satellites, buoys, ships, and weather balloons throughout the world, says Phil Klotzbach, a meteorologist who heads the Tropical Meteorology Project at Colorado State University. But when an individual storm begins to brew over the open ocean, another breed of weather trackers steps in to foretell its future.

Based out of Biloxi, Mississippi, the U.S. Air Force’s 53rd Weather Reconnaissance Squadron Hurricane Hunters collect information for the National Hurricane Center to predict a storm’s intensity and direction—data that can only be gathered from within a storm itself.

The National Oceanic and Atmospheric Administration (NOAA) has its own hurricane hunters, but their flights are primarily for research purposes—the Air Force is the lead agency for operational missions, Dyke says. He flies in the back of the plane to oversee each mission’s data collection. In addition to the typical probes measuring temperature, pressure, and altitude, the hurricane hunter aircrafts have all sorts of special instruments.

One device determines surface-level wind speeds based on the choppiness of the ocean’s waves, calculated using radiation emitting from the water’s surface. Another measures the atmosphere’s moisture content, which can help predict whether a storm will continue to build or fizzle out. That’s what happened last month when Dyke was flying through Alberto and noticed the storm pulling in dry air. This often causes a system to cease building, he says, which ultimately helped dissolve Alberto.

A flight will last anywhere from 10 to 12 hours, the majority of which is spent inside a swirling storm. At more than a dozen points throughout the journey, zig-zagging in and out of the storm’s eye, meteorologists will drop small devices from the back of the plane called dropsondes. Attached to a parachute, these instruments collect temperature, relative humidity, wind speed and direction as they plummet through the sky, according to Kevin Petty, an atmospheric scientist at Vaisala, a company that manufactures meteorological instruments.

The information from the dropsondes and the plane itself paints a picture of what’s happening inside the storm. The National Hurricane Center receives this data and feeds it into computer models to predict where a storm will move and what its wind speed and storm surge might be once it hits land.

Air Force crews have been flying into storms to gather information for the public since the 1940s, but they didn’t have much to go on without satellite data. “They used to fly to the Virgin Islands and just head east, looking for waves,” says Klotzbach, from Colorado State.

Now, hurricane hunters fly into every major weather system expected to make landfall. This year, that likely means they’ll head into a handful of hurricanes and over a dozen named storms, according to Klotzbach. As of last week, his group is predicting a hurricane season of average intensity in the Atlantic, similar to NOAA’s latest forecast.

Dyke watches each year’s hurricane season predictions, even if they say nothing of the individual storms themselves. “I do keep up with it,” he says, “just to know if I’m going to have some time off in a summer.”