The conditions to blame for 2017’s wildly destructive hurricane season 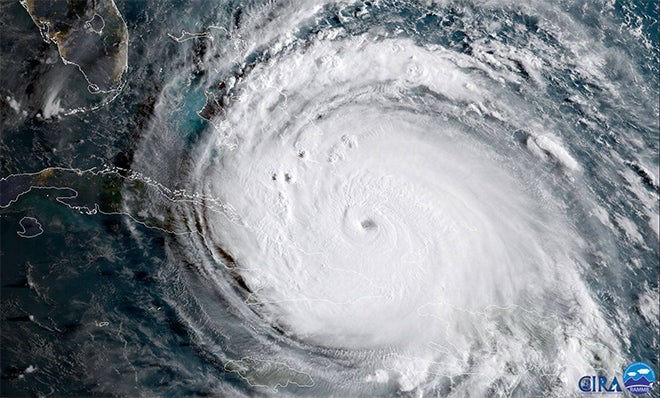 It’s been a bad year for hurricanes, and we’re only a little over halfway through with the season. Five of these storms have slammed ashore this summer so far, claiming hundreds of lives and leaving behind unfathomable damage. In some areas, recovery could easily take decades. This marathon of intense hurricanes is a pretty big change from the last couple of years, which brought relatively unremarkable storm seasons. What is it about 2017 that’s so different from years past?

We’ve had a smattering of noteworthy seasons over the past couple of decades. Most years are remembered for a particularly devastating storm, or an unusually large number of them. We remember 1992—otherwise an extremely quiet year—for the catastrophic damage wrought by Hurricane Andrew. The 2004 hurricane season is memorable for the sheer number of destructive storms that hit the United States. The 2005 Atlantic hurricane season was the most active on record; we exhausted the list of storm names following the English alphabet, and had to name six additional storms using Greek letters. Many of the events in that record-breaking year were intense—including Katrina and Wilma—but the season was also unusually long. Tropical Storm Zeta, the last storm to hit in 2005, actually survived into the first week of January 2006.

As things stand now, the 2017 Atlantic hurricane season is set apart by the number of intense storms that formed, and how many of those powerful systems made landfall. After a rather underwhelming start to the year, hurricane activity suddenly blossomed in the late summer—and we saw eight consecutive hurricanes in a six-week period. The frenzy began with Hurricane Franklin in early August, and continued through tiny Hurricane Lee at the end of September.

Five of this year’s hurricanes made landfall, and many hit land more than once along the way. Franklin and Katia hit both hit central Mexico. Harvey devastated southeastern Texas as a category four storm and unleashed historic floods while gradually winding down over the following week. Irma totaled the island of Barbuda with 185 MPH winds, and forever changed the landscape of many more Caribbean islands as it tore towards a final landfall in Florida. Maria devastated Dominica and Puerto Rico; it was the worst storm to hit these islands in generations. The unincorporated U.S. territory—and its 3.4 million U.S. citizens—will almost certainly be without power for months.

How did this happen? Warm water beneath a storm is often discussed as the single factor that determines the strength of a hurricane. While the warmth of the water does dictate how strong a hurricane can grow, the environment in which a storm forms is just as important. High wind shear can lop off the tops of thunderstorms that try to organize into a tropical cyclone. Dry air, especially the dusty air that blows off the African Sahara, can choke a cyclone and cause it to fizzle out. Stable air prevents thunderstorms from developing at all.

That’s what we’ve seen happen, for most part, for the past couple of years. Beginning in 2013 and lasting through 2016, the Atlantic Ocean spat out a couple of formidable storms (like category five Hurricane Matthew and category four Hurricane Joaquin), but most of the storms that managed to spin up were a mess because of those three factors—high wind shear, dry air, and stable air. The storms were lopsided and disheveled, and as a result many looked like regular springtime thunderstorms instead of intense tropical cyclones.

This year, though, the atmosphere has cooperated with just about every storm that managed to form since August. Hurricanes Harvey, Irma, Jose, and Maria, especially, were able to take full advantage of calm winds, tropical moisture, and extremely warm waters to explode into the kind of storm emergency officials talk about when training for the worst-case scenario.

We’ve been in a pretty neutral pattern for most of the year, with temperatures in the eastern Pacific skewing a little on the cooler side. This has likely helped to lower the amount of destructive wind shear over the Atlantic Ocean and allowed storms like Harvey, Irma, and Maria to feed on the warm water and moist air available to them without interruption. Since hurricanes thrive on warm ocean water, it’s likely that rising ocean temperatures connected to climate change could provide more opportunities for future storms to rapidly intensify like this year’s hurricanes. But there’s no evidence that climate change causes storms, per say, so much as it makes it easier for them to grow strong. So while there’s reason to worry that our average hurricane season is going to get worse as the ocean gets warmer, several other, unrelated factors contributed to 2017’s powers of devastation—and not all of those conditions will be so hurricane-friendly on a regular basis.

We can’t assume that we won’t see a few more intense storms this year. Hurricane season runs through the end of November, and grand finales are not unprecedented. The water in the western Caribbean Sea is certainly warm enough to support another strong storm or two. But while this has been a particularly bad year for hurricanes, it’s important to remember that it doesn’t take a particularly strong storm to cause a widespread disaster. Even a weak hurricane can flood a city.