No, U.S. Drones Weren’t Shot Down Over Crimea

Maybe don't believe hearsay from Russian media when they're currently invading a country. 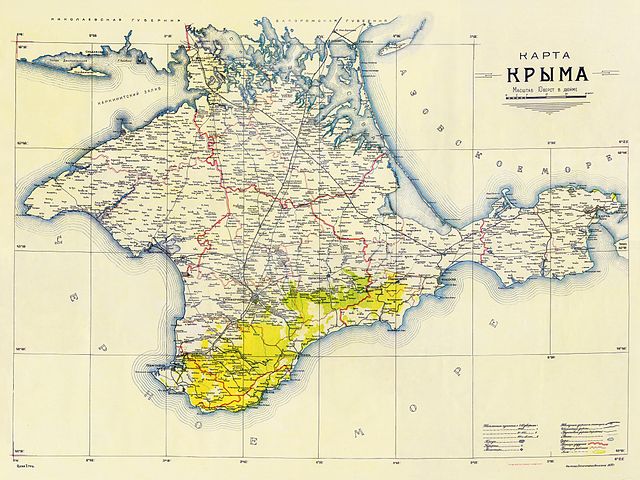 According to a Voice of Russia report that has now mysteriously vanished, two American drones were shot down over Crimea this morning, including a “heavier, two-engine drone.” The story popped up on Reddit’s world news front page, and has been floating around Twitter, too. But lest we think World War III broke out over the Black Sea this morning, there are plenty of reasons to think the report, which cites info from Novosti Kryma (News of Crimea), is totally false.

One is that the American military has no two-engine drones. The closest is Boeing‘s Phantom Eye, an experimental potbellied drone built around a pair of liquid-hydrogen engines. Eventually, it could be a long-range surveillance drone, but just last month the U.S. Air Force designated it an experimental Air Force vehicle, meaning it’s at the start of a long road to being an airplane the military uses. The Pentagon confirmed to Popular Science that the United States has no twin-engine drones.

Another problem with this news report is that America doesn’t fly drones over hostile skies without an escort. In wars like Afghanistan, where there is no enemy air force to speak of, American drones fly independently. In places like the Persian Gulf, where other air forces might challenge American drones flying overhead, the Air Force escorts drones with fighters.

A third problem is the nature of the report itself. It comes from Voice of Russia, an English-language radio service owned by the Russian government. Russia is currently moving a large number of soldiers into Crimea, so many that the government of Ukraine is accusing Russia of invading. The Voice of Russia story has since been replaced with a report about the Malaysia Airlines Flight 370 crash. The URL, at time of writing, still reads “2014 03 11. Two US drones allegedly shot down in Crimea.” 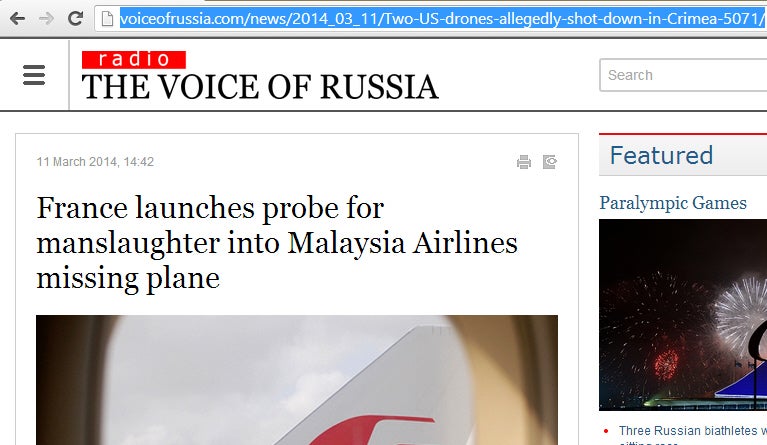 Something Is Off Here

Voice of Russia’s URL doesn’t match the story in a really weird way.

The Pentagon was even more blunt: “There is no truth in the reporting.”

Update 4:55 3/15/2014: The Pentagon clarified: “The US military does in fact have UAV/UAS with 2 engines,” but US doesn’t have large two-engine drones. According to a report from a Russian state military technology company yesterday, an RQ-5 Hunter drone was intercepted over Crimea. That report has since vanished from the site, though there is a cached version still online. According to NBC Chief Foreign Correspondent Richard Engel, officials categorically deny that “US drones of any kind are flying over #Crimea, much less getting intercepted.”