The Pentagon just dropped the ‘mother of all bombs,’ its biggest non-nuclear weapon

It's still orders of magnitude smaller than Little Boy, the bomb dropped on Hiroshima 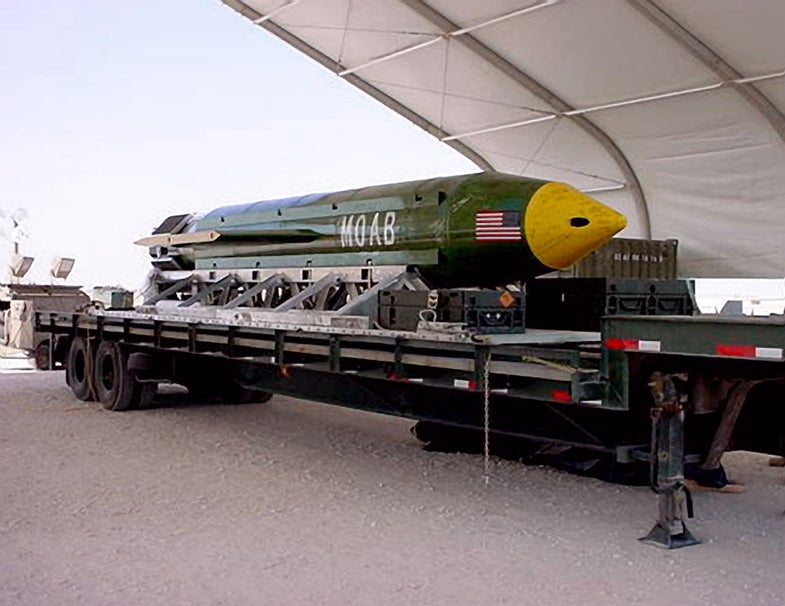 The GBU-43/B Massive Ordnance Air Blast bomb sits at an air base in Southwest Asia waiting to be used should it become necessary. The MOAB is also called "The Mother of all Bombs" by scientists and the community alike. (Courtesy photo).
SHARE

After fifteen years of war in Afghanistan, it’s amazing there are still firsts for the Pentagon. One happened today: the first combat use of a GBU-43 bomb, formally the Massive Ordnance Air Blast and informally the “Mother of all bombs”.

Here’s what CENTCOM said about the strike:

At 7:32 pm local time today, U.S. Forces – Afghanistan conducted a strike on an ISIS-K tunnel complex in Achin district, Nangarhar province, Afghanistan, as part of ongoing efforts to defeat ISIS-K in Afghanistan in 2017.

The strike used a GBU-43 bomb dropped from a U.S. aircraft. The strike was designed to minimize the risk to Afghan and U.S. Forces conducting clearing operations in the area while maximizing the destruction of fighters and facilities associated with ISIS-K, an ISIS offshoot that claims dominion over Uzbekistan, Afghanistan and Pakistan. .

What is the Massive Ordnance Air Blast?

Developed in 2003, the GRU-43 Massive Ordnance Air Blast is nicknamed the “Mother of All Bombs,” and frequently referred to as simply “MOAB.” It is the largest conventional bomb in the Pentagon’s inventory, which is to say, the largest non-nuclear weapon available to the United States. The MOAB is plenty explosive, but unlike nukes, there are no radioactive after-effects. The total weight of the bomb is 21,600 pounds and of that, 18,000 pounds is a mix of explosives. The blast creates a visible mushroom cloud that could easily be mistaken for a nuclear blast. The MOAB’s final test was on March 11th, 2003, just nine days before the United States invaded Iraq.

“The weapon is expected to produce a tremendous explosion that would be effective against hard-target entrances, soft-to-medium surface targets, and for anti-personnel purposes,” wrote Air Force Major General Thomas J. Fiscus, in a legal review of the weapon in 2003. “Because of the size of the explosion, it is also effective at [landing zone] clearance and mine and beach obstacle clearance. Injury or death to persons will be primarily caused by blast or fragmentation. It is expected that the weapon will have a substantial psychological effect on those who witness its use.”

The MOAB is filled with 18,000 pounds of high explosive mixed with aluminum to create higher temperatures and a longer-duration blast wave. In 2003, that didn’t set it apart enough to warrant special consideration for its use, but it might today.

“The MOAB weapon kills by way of blast or fragmentation. Blast and fragmentation are historic and common anti-personnel effects in lawful military weapons,” Fiscus continues in that same Air Force legal review: “There are no components that would cause unnecessary suffering. The explosive ingredient H6 is a widely-used explosive that is typical for weapons of this type. The components RDX and TNT do have some potential toxic effects from long-term exposure, but these are limited and within US government tolerance levels. The potential psychological effect of the weapon does not constitute suffering. The intent is to demoralize or frighten the enemy by impressing them with the large footprint, resulting cloud, and tremendous noise of the explosion.”

While “largest non-nuclear bomb in the arsenal” is big, it’s still three orders of magnitude smaller than the smallest nuclear warhead. The MOAB contains 18,000 pounds of an explosive mixture based on TNT; Little Boy, the atom bomb dropped on Hiroshima, is equivalent to 15 kilotons of TNT, or 30,000,000.

What plane can drop the MOAB?

Because of the MOAB’s singular size, over 30 feet in length, it’s carried inside a modified transport plane, the MC-130H. It is released at high altitude, sliding out the back of the plane, and then guided by GPS to a target up to three miles away. While it is the largest bomb as a single unit, it isn’t the deadliest conventional explosive payload. The venerable B-52 bomber, flying since the 1950s, can carry a total payload of 70,000 pounds of bombs, mines, and missiles.

Why was it built?

The MOAB replaced an earlier large conventional bomb, the BLU 82 “Daisy Cutter,” which the United States used in wars from Vietnam to Afghanistan and in Iraq as well. “Daisy Cutter” is a cutesy name that hints that the bomb’s purpose: blast way everything, including vegetation, from a large area. To that end, the BLU-82 had a 12,600 pound explosive slurry inside.

“The designers optimized this bomb to clear vegetation while creating little or no crater,” according to an old Air Force fact sheet, “and it cleared landing zones about 260 feet in diameter — just right for helicopter operations.”

Why was it used?

Which brings us back to the MOAB’s use today. There are other weapons that are better against tunnels specifically than the MOAB, like similarly named Massive Ordnance Penetrator, which can be carried by stealth bombers. But the MOAB is, by definition, an air burst weapon: it’s not built to destroy things like tunnels under the ground, though if the tunnels are shallow enough it’s possible there is some appreciable effect. Instead, the explicitly stated reason for the attack was to “minimize the risk to Afghan and U.S. Forces conducting clearing operations in the area while maximizing the destruction of ISIS-K fighters and facilities.”

Was there any risk to civilians?

In 2006, the population of Nangarhar province was over 1.3 million, with a population of over 95,000 civilians in Achin province specifically. This isn’t a uniformed foe in the middle of nowhere. To account for that, the Pentagon has specific targeting rules it follows, to make sure that the target is appropriate and that harm to civilians was minimized, but it’s important to wait for reports back from the ground before assuming that the strike was carried out without any injury to the population in the area.

What effect did the bomb have?

Reports from the Afghan Defense Ministry claimed that the MOAB killed 36 ISIS fighters, though some estimates were larger. CENTCOM says it has not yet seen evidence of civilian casualties. Curiously, ISIS social media accounts appear to be downplaying the bomb’s effect, posting pictures seemingly showing fighters untouched by the strike. Villages in the area felt the blast.

The Pentagon released a 30 second clip of the MOAB strike. The clip, which appears to be filmed in infrared, shows a gentle slope, and then a blinding flash, and a mushroom cloud rising from the center of that slope. Watch it below: