This Massive Indoor Hurricane Simulator Could Save Your Life

In a giant aquarium in Florida, scientists are creating 150 MPH hurricanes 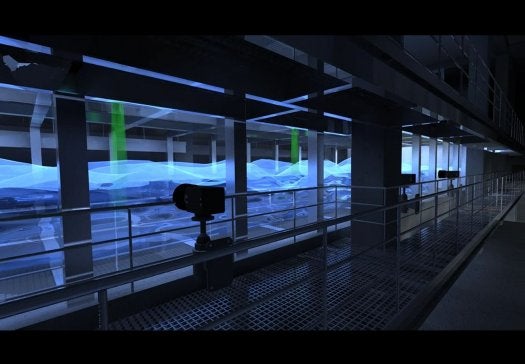 About two years ago, Brian Haus, the chair of the Division of Applied Marine Physics at the University of Miami, was studying storms in the western Pacific ocean, off the coast of Taiwan. He and his team chase hurricanes. Sometimes the hurricanes completely miss the sensor-packed buoys placed in their path to track power and speed. Sometimes they don’t.

This time, the researchers got lucky. Not one, but two super typhoons hit their equipment at the same time. Even luckier, most of their gear managed to not break apart. He and his team waited for the storms to subside before they left port to retrieve their recording devices. But before they could recover the buoys, one storm, named Chaba, defied the forecasts. Instead of losing strength, it headed right for them at full power. Haus and his fellow researchers found themselves enduring nine days of “most uncomfortable” 30-foot swells.

Over the summer, the University of Miami broke ground on the $45 million Marine Technology & Life Sciences Seawater Complex, which will house a tool that will give Haus and other scientists studying storms more steady, predictable, and controllable access to an important resource in their work–the hurricanes themselves.

The hurricane simulation tool, which is named SUSTAIN (short for SUrge-STructure-Atmosphere Interaction) is a tempest in a teapot the size of a small house. When it’s completed, it’ll be unique in its ability to create category-5 level hurricanes inside of a lab, across a 3-D field of waves made of real sea water pumped into the building at 1,000 gallons per minute.

With it, scientists will be able to better understand the process by which hurricanes are fueled by warm water.

We know that hurricanes grow in power when they pass over deep warm water, and mellow out when they pass over colder areas. But we don’t know much about the actual process of this energy transfer on the molecular level. By using salt water, the simulator more accurately creates sea spray and foam, which are believed to affect its evaporation into the atmosphere. And for the moment, how much heat is transferred directly and how much is transferred by evaporation is completely unknown. By simulating different kinds of waves and wind conditions, some with more and less spray, the scientists can measure the air and water temperature shifts using thermisters to model the delta in heat transfers when there’s varying amounts of spray.

Knowing how this process fuels hurricanes will allow scientists and meteorologists to build smarter models of them, so we can forecast them with more accuracy. And its not possible, or easy, or safe to make these observations in the field. He says, “At sea, you have to deal with the real beast, but in the lab, we have the opportunity to create the hurricane when and how we want it.”

The hurricane simulator and SUSTAIN is being designed by Cambridge Seven, the cross-functional architecture and engineering firm which got its start by winning the bid to create the New England Aquarium 50 years ago by being the only firm to mention fish in their pitch. Peter Sollogub, Associate Principal at Cambridge Seven, says the hurricane simulator is comprised of three major components:

The first is a 1400-horsepower fan originally suited for things like ventilating mine shafts. To create its 150mph winds, it will draw energy from the campus’s emergency generator system, which is typically used during power outages caused by storms. The fan, sitting next to sensitive instrumentation, must have its vibrations isolated. “It’s like your right hand is in a hurricane and your left hand is conducting retinal surgery,” Sollogub says. The wind speeds are sensed through laser and sonic wind meters (otherwise known as anemometers).

The second part is a wave generator which pushes salt water using 12 different paddles. Those paddles, timed to move at different paces and rates, can create waves at various sizes, angles and frequency, creating anything from a calm, organized swell to sloppy chaotic seas. To reduce wave refraction, the end of the pool has a perforated, parabola-shaped beach to dissipate wave energy.

The third aspect of the tank is the tank itself, which is 6 meters in width by 20 meters in length by two meters high. It’s made of three-inch thick clear acrylic so that the conditions inside can be observed from all sides. They’ve got to create ductwork for the air that creates “well behaved high velocity flow” so testing is accurate.

Bob Atlas, Director of the National Oceanic and Atmospheric Administration’s (NOAA) Atlantic Oceanographic and Meteorological Laboratory, has hopes for SUSTAIN, believing it will have an impact on our ability to predict the power of storms. Atlas says that when Katrina made landfall, NOAA–and the nation–realized that “we had made tremendous progress in track forecasting, but we hadn’t yet really made a dent in being able to forecast intensity of hurricanes.” 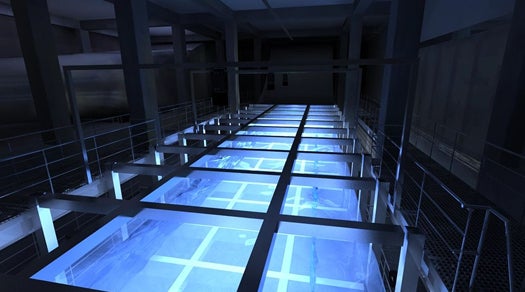 Bob Atlas has spent his career forecasting harsh weather, beginning in the U.S. Air Force where he maintained a rate of accuracy greater than 95%. His career then turned to research and modeling, first at NASA and now with NOAA, where the agency’s Hurricane Forecasting Improvement Project has improved 26% in track prediction and 14% in intensity forecasting from 2005-2011. Atlas credits better models that also incorporate Doppler radar from hurricane spotting planes–both things that the hurricane simulator at U Miami will also help improve. SUSTAIN has been designed with a large overhead space where remote sensing experts plan to aim cameras positioned downward, mimicking the perspective of weather satellites. The remote measurements of the cameras will be compared against the actual measurements taken by lasers in the tank to fine-tune our ability to measure storms and waves from afar.

But, Atlas added, there’s a more practical aspect of the SUSTAIN facility that will tell us about more than just storms–it’ll also tell us about how the world we live in will react to violent weather. All of SUSTAIN’s fury can be aimed at models of manmade and natural structures–buildings, beachheads, sea walls–so that architects and engineers can test how storm surge and spray will affect cities and coasts. (Yes, they plan on clobbering mini models of skyscrapers.)

Atlas says, “NOAA has to be able to predict the storm. But ultimately, what the public needs to know is if their streets and homes will be flooded, and if their homes will survive when the hurricane is making land fall. And for that, I believe this facility can help.”

A version of this article originally appeared on PopSci.com in August.