Power-multiplying exoskeletons are slimming down for use on the battlefield

The technology has been long-anticipated by military commanders. 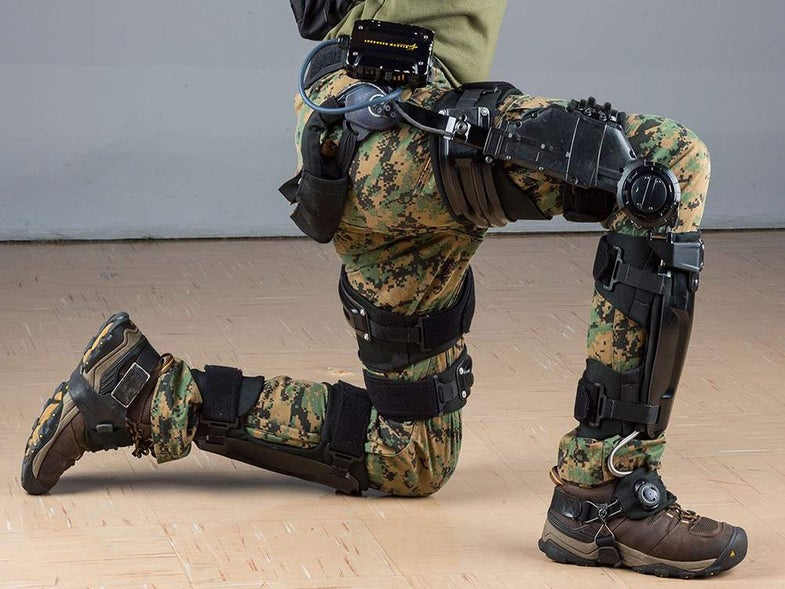 Dashing around a battlefield in the bulky robo-armor Tom Cruise wore in Edge of Tomorrow won’t cut it in the real world. For starters, it’s way too big. And the energy required to power something that size—via a gas engine strapped to your back in some early inventor iterations—is noisy and a giveaway to the enemy that you’re approaching. But a raft of newly developed exoskeletons is starting to meet the slimmed-down, stealth requirements of today’s troop commanders, who see these power-assisting suits as vital to the future combat missions. Among the most promising, and weird-looking, is the “third arm” that the U.S. Army Research Laboratory developed to help soldiers carry and support their weapons on the battlefield. The lightweight device, which weighs less than four pounds and hangs at a soldier’s side, stabilizes rifles and machine guns, which can weigh up to 27 pounds. This improves shooting accuracy and also minimizes fatigue. It can even be used while scrambling into position on the ground.

The kind of fatigue that the third arm aims to negate is a killer on the battlefield, and most of the new suits are similarly meant to help troops minimize the energy they use to carry enormous supply packs, weapons and other battlefield gear. In May, Lockheed Martin unveiled its lightest weight powered exo for lower body support. Dubbed ONYX, the form-fitting suit, which resembles an unobtrusive web of athletic braces, reduce the effort soldier’s need for walking, running, and climbing over varied terrain while carrying a heavy loads of up to 100 pounds.

The suit uses tracking sensors, mechanical knee actuators, and artificial intelligence-based software that predicts joint movement, all of which reduce stress on the lower back and the legs. It uses both rigid and flexible components, which fit snugly to make it more comfortable, and is meant to augment the user’s capabilities rather than do any of the actual work for him or her. “The system’s on-board computer uses an artificial intelligence algorithm to read and interpret motion sensors placed in key locations through the exoskeleton,” explains Keith Maxwell, Lockheed’s senior exoskeleton program manager. “ONYX tracks how the leg moves, understands the motion and provides a boost, assisting the knee at just the right time. This reduces stress on the lower extremities, increases stamina and improves endurance.”

The trick, according the Maxwell, is having the assistance come at just the right time, in order to prevent the wearer from falling out of sync with the device, or “fighting” it. ONYX syncs up with the user, but there’s room for even more improvement in the future, once its able to read electrical impulses directly. “It takes 75 milliseconds for the human body to go from thought to action,” said Maxwell, referring to the time it takes for electrical impulses from the brain to initiate muscle movement in the body. “We’re getting inside that control loop—detecting that signal at the muscle and initiating our movement at the same time the muscle moves.”

As a result, the exoskeleton quickly becomes second-nature, ultimately reducing the metabolic “cost” of transport—the wearer’s VO2max—by nine percent. In other words, soldiers don’t have to consume as much oxygen to perform a given task, Maxwell says. Taking that edge off has associated benefits. It improves psychological performance and cuts the risk of bone and muscle injuries. Furthermore, the motorized, battery-powered suit, which could have an eight-hour life with two batteries and up to 16 hours with four batteries, helps evenly distribute weight while carrying loads, helping maintain skeletal alignment. This avoids overstress and pressure injuries.

As an example of the net benefit, the company says a soldier who could normally perform 26 reps of 185-lb squats could perform 72 similar reps while wearing ONYX. “It won’t make you stronger or faster, but it will help you go longer,” says Maxwell, a frequent wearer of the exoskeleton who notes that doing so makes his own knee injuries essentially vanish. During a demonstration of the suit last week, he showed this off by performing an essentially effortless squat that he says he could maintain for an hour if needed.

Lockheed engineers are currently working on hardening the components so they can withstand battlefield use and improving the harnessing so it’s even more discreet and unobtrusive. They are also tweaking the fitting process to ensure that soldiers can properly adjust it without tools, in the field.

While Lockheed’s version is certainly streamlined, one of its competitors, Boston-based Dephy, has taken exo design a step beyond by further minimizing the hardware needed. Its ExoBoot improves overall mobility, but limits it physical presence to just the ankle. According to Dephy cofounder Luke Mooney, many exos work to bypass the human frame and transfer the loads soldier’s carry into the ground. But those systems are hampered by having to move their own weight, as well. Dephy’s ExoBoot works to provide artificial external muscles, focusing on the ankle joint instead of the knee, as ONYX does. “ExoBoot reduces calf muscle effort by providing an external torque about the ankle joint,” Mooney said. “Reducing muscle work reduces the operator effort—i.e., the metabolic cost—while also reducing muscle forces and the corresponding joint forces.”

Unassisted, calf muscles apply more than 1,000 pounds across the ankle joint even during normal walking, Mooney explained. That number is much higher while running or carrying a load. The boot uses an electric motor and onboard sensors and a controller to apply torque around the ankle. It feels like a normal boot when unpowered, though about a pound heavier, but most of the extra mass from the battery and electronics sits higher up the calf, making it feel lighter. When you take a few steps, the controller analyzes the forces and begins to provide supplemental torque to the ankle joint through tiny electric motors. Though the wearer can sense the presence of the boot at first, as well as the mechanical augmentation it’s providing, his or her body quickly adapts, rendering its presence unnoticeable, and therefore not a distraction or inhibitor—though the company reports that when the boot is switched off while in use, users who’ve grown accustomed to it describe their legs as feeling briefly like lead before returning to their more natural feeling. (Though obviously the exertion then ramps up, as well, once the boot is no longer supplementing their muscles.)

Because these systems are still in development, neither the Army nor the defense contractors will disclose estimated, per-unit costs. Of course, as with a lot of military innovations, they also have outside applications—first responders deploying them in emergency and disaster situations, plus countless uses for commercial and industrial workers—that will also help keep development and the overall final costs low for all parties.

There’s plenty of work still to be done. Acoustics, for instance, will be key to military users. The public videos released of Lockheed’s system are absent sound, but while observing the system last week, it was audible—via persistent electro-mechanical squeaks—but not particularly loud. Still, the next version, Maxwell says, will be even quieter.

Testing the systems could begin with field trials with the 10th Mountain Division at Fort Drum, N.Y., as soon as the end of this year. Such powered devices are part of the Army’s so-called Third Offset Strategy, which seeks to use robotics and artificial intelligence to enhance humans on the battlefield, rather than to replace them.

Actual deployment will depend on how well the systems perform in the trials, which will include everything from flat-surface and incline tests to comfort and usability evaluations by Army soldiers, and any further enhancements or modifications that might be needed as a result. One day, though, these systems could give Tom Cruise’s clunky getup a lightweight run for its money.