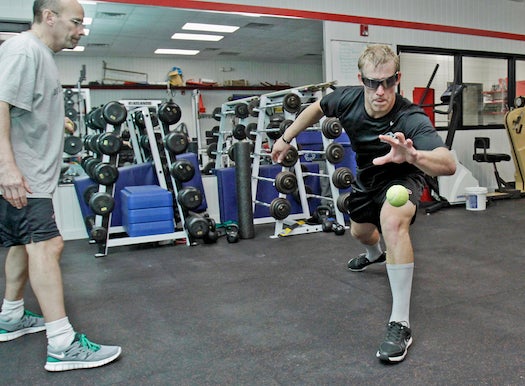 The Carolina Hurricanes' Justin Peters, right, lunges for a ball that trainer Pete Friesen, left throws to him at Raleigh Center Ice in Raleigh, N.C. on Aug. 31, 2011. Friesen has been using the Nike strobe goggles that Peters is wearing to help develop the players' vision and response time. CHRIS SEWARD
SHARE

If you’re training for a marathon, you might consider hooking on some ankle weights to provide push-back, making the training more difficult but getting you up to speed faster. Makes sense. One thing that makes less sense but still weirdly works? Blinding yourself and then playing some hockey.

Researchers from Duke University recently strapped stroboscopes onto players from the NHL’s Carolina Hurricanes, giving them a view that quickly oscillated between transparent and opaque (and got them ready to daaance paaaarty). Then the researchers had the team run some drills.

Turns out, the same idea as applies to vision and sports. Previous studies with athletes have shown that training with similar eyewear could improve vision and speed reactions to moving objects, but before now it hadn’t been tested in a real setting. The Duke study tested the Hurricanes players at their 16-day pre-season training camp. A group of six were given tasks before and after training to measure performance–forwards were given a shooting challenge, and defensemen a passing challenge. (Another group of give, the control group, got the regular ol’ training.) The trial group with the stroboscopic glasses showed a noteworthy improvement when stacked up next to the control group.

So should every team immediately start semi-blinding their players during practice? Well, no, calm down. This was a very, very small pilot study (there aren’t that many players on the Hurricanes, after all), so it might be a leap to start trying it out. But also, you know what? Giving these to players during actual games could make things interesting, too.