The Psychology Of Loving Heavy Metal

Fans of contemporary heavy metal tend to share a dislike of authority and a bit of a self-esteem problem, one study finds. 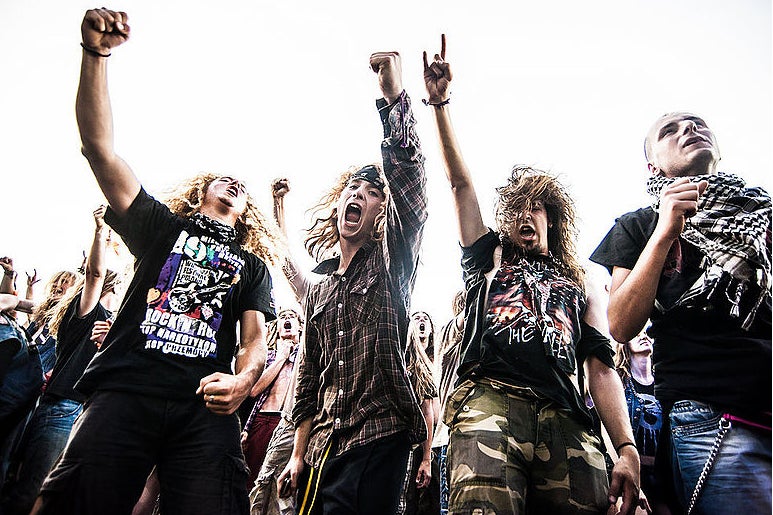 You can tell a lot about someone from their taste in music. Especially if they have a penchant for contemporary heavy metal. Researchers at the University of Westminster in the U.K. recently turned their scientific attention toward heavy metal music, examining what makes a connoisseur of metal, psychologically speaking. They found that many heavy metal aficionados shared a particular pattern of personality traits.

In a study published in Psychology of Aesthetics, Creativity, and the Arts, a total of 414 participants, almost half of whom were college students, listened to 10 songs from bands like Overkill, Enslaved, Disturbed and Cradle of Filth and rated how much they liked them. They also answered surveys measuring how they matched up with the Big Five personality traits, their need for uniqueness, their self-esteem, attitudes toward authority and religiosity.

Somewhat predictably, heavy metal fans were more likely to be male, to dislike authority, and to feel a need to be unique. Enjoying heavy metal was also correlated with openness, possibly because people with more open personalities would be drawn to music that is “intense, engaging, and challenging,” as metal can be, the researchers write. Interestingly, the metal fans in the study tended to have relatively low self-esteem. “The catharsis afforded by heavy metal may, in turn, help boost self-worth and promote positive self-evaluations among those with otherwise low self-esteem,” the study postulates.

Sure, these results could be only applicable to these few hundred British people. But more broadly, they “may help scholars to more fully understand why some individuals are attracted to nonmainstream music,” the researchers conclude. “Rather than stereotyping fans as deviant, antisocial, or violent, it may be more fruitful to understand the psychological needs that contemporary heavy metal fill for some individuals.”