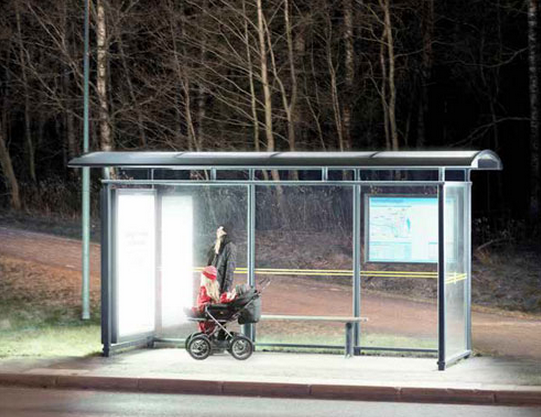 Days will keep getting shorter as we approach the winter solstice, which means fewer and fewer hours of sunlight. That can be depressing at normal mid-North American latitudes, so imagine how bad it gets in a place like Sweden. To fight the winter doldrums, a Swedish utility is installing UV lights at bus stations.

Light therapy is a common treatment for seasonal affective disorder. “Winter is in many ways a fantastic season, with the darkness and the cozy atmosphere. But when the sun appears as a minimum, [we] need the energy the most,” Umeå Energi explains on its website (translated by Google).

Umeå is especially dark in the winter. Located in northern Sweden 300 miles north of Stockholm, it’s only sunlit for about five hours a day this time of year, according to the English-language Swedish newspaper The Local. Come mid-December, there will be just about four hours of daylight. Usually snow on the ground reflects streetlights and makes the city feel brighter, but there hasn’t been enough snow this year, making things even darker than usual, The Local explains. “Even though it snowed today, the sun had set by 2pm. People need to get their vitamin D somehow!” Göran Ernstson, CEO of Umeå Energi, was quoted saying.

The lights are powered by solar, wind and hydroelectric sources, and they are designed to filter out any UV radiation, only providing a sun-like glow.

One catch: That glow might be a bit too sun-like. The company later had to remove a couple of the lights after bus drivers complained they were “blinding.”

[via Reuters, The Local]