There Is a Super-Entity Inside the Human Brain

Super-entities are not just limited to dominance of the globe. Just as the economy is intertwined and largely controlled by... 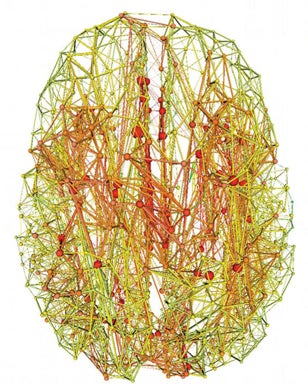 This image shows the group connectome, with the nodes and connections colored according to their rich-club participation. Green represents few connections. Red represents the most. Van den Heuvel, et al. The Journal of Neuroscience 2011
SHARE

Super-entities are not just limited to dominance of the globe. Just as the economy is intertwined and largely controlled by a small and powerful core network, so too is your brain. Researchers have long known that some areas of the brain are deeply connected to other regions — but now a team from Indiana University and the Netherlands says these connected brain regions form strong connections to each other, creating a cerebral “rich club.”

This club comprises 12 hub regions, which the researchers say are involved in complex human behavior and cognitive tasks. If any of the members of this club were damaged, the effects would be wide-ranging; if brain areas outside the club were damaged, a patient would see localized effects but the overall brain’s information flow would be uninterrupted.

Led by Martijn van den Heuvel, a professor at the Rudolf Magnus Institute of Neuroscience at University Medical Center Utrecht, the team looked at MRI scans of 21 healthy men and women. With a technique called diffusion imaging, they were able to map the brains’ large-scale connections. The 12 ultra-interconnected regions are found in the precuneus; superior frontal cortex; superior parietal cortex; subcortical hippocampus; the putamen and the thalamus. Most of these areas are involved in complex information processing.

Van den Heuvel called it the “G8 summit of our brain.”

“It’s a group of highly influential regions that keep each other informed and likely collaborate on issues that concern whole brain functioning,” he said in a statement. “Figuring out what is discussed at this summit might be an important step in understanding how our brain works.”

This could have implications for various mental health disorders, for instance. Neuroscientists could examine how the rich club is affected in patients with schizophrenia. Or they could study how degenerative brain diseases impact the rich club and its connections.

The tightly woven connections among these regions were surprising, said Olaf Sporns, a professor in IU’s Department of Psychological and Brain Sciences. “All these regions are getting all kinds of highly processed information, from virtually all parts of the brain,” he said.

Sporns is among an international team of researchers trying to map all the connections in the brain, what’s known as the connectome. “It’s a fundamental step toward understanding the brain as a networked system,” Sporns said.

A paper describing the work appears in the Journal of Neuroscience.