A Spoonful Of Sugar Helps The Bacteria Go Down 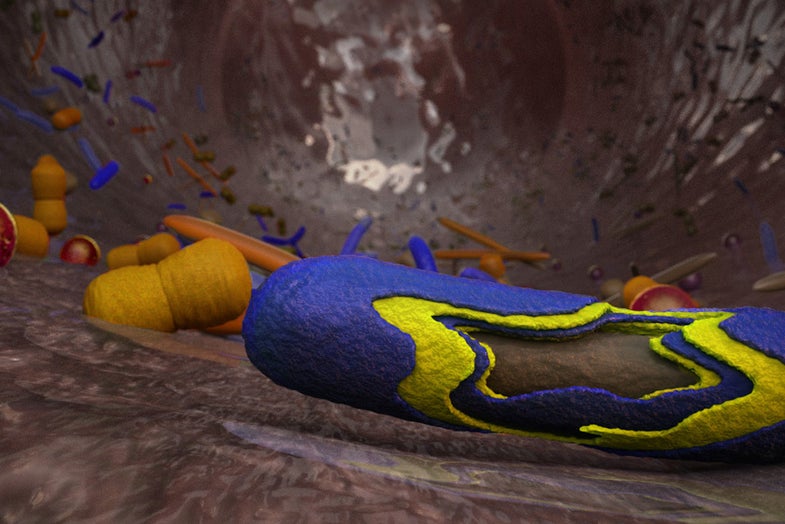 There has never been a better time to replenish your gut flora–also known as the living microorganisms stationed in our digestive tracts. You can take your bacteria in a pill, eat them in your “buttery spread”, drink them through a blue straw, or have a doctor stick them directly inside you. But since most people don’t like that last option, researchers have been working on better ways to deliver helpful flora orally and make sure they reach your intestines.

The problem is that many of the bacteria in today’s probiotics don’t actually make it to your gut. Our stomach acid kills all but the most resistant strains of bacteria, and that’s assuming that they’re even alive to begin with. Over-the-counter probiotics aren’t regulated by the Food and Drug Administration, so they’re not held to their claims about how many live bacteria are inside the pill. Not that that’s stopped almost four million people from using them in 2012.

In principle, though, getting helpful bacteria into intestinal tracts could help a lot of people. Multiple gastrointestinal disorders, allergies, and liver disease are all on the list of ailments that probiotics could help. Fecal transplants have already been used to treat nasty GI infections of a bacterium called Clostridium difficile.

Now MIT researchers have devised a new way to protect bacteria from the onslaught of the human body’s defense system, published this week in the journal Advanced Materials. The scientists used layers of two different polysaccharides, or sugars, to coat individual cells of Bacillus coagulans, which is used to treat irritable bowel syndrome. The end result is a patina of gel enveloping the bacteria in a protective sheath, helping them to get through the stomach and stick to the intestinal lining.

This method allows six times more bacteria to survive than they would without a coating, and the researchers say it could replace fecal transplants–the sugary layers can be used to make a pill or a powder to dissolve in a beverage of your choosing.

Once we figure out which bacteria are actually helpful, this could open up a whole new (possibly terrible) wave of probiotic versions of food. We already have probiotic burritos. How much further can we go?