An excerpt from the June 1962 issue of Popular Science, in honor of Glenn's 95th birthday On Monday, July 18, 2016, former NASA astronaut, U.S. senator, and military pilot John Glenn celebrated his 95th birthday. To celebrate the occasion, Popular Science shares below the first time Glenn was ever mentioned in our magazine. The article, “How To Get Down From 100 Miles Up,” originally penned by Wesley S. Griswold, looks at the technology that was required for Glenn, the first American to orbit the earth, to safely return from his mission.

While doing this, his spacecraft plunges forward a few thousand miles and downward around 100 miles. It all takes an astonishingly short time—in Lt. Col. John Glenn’s case, 23 minutes. 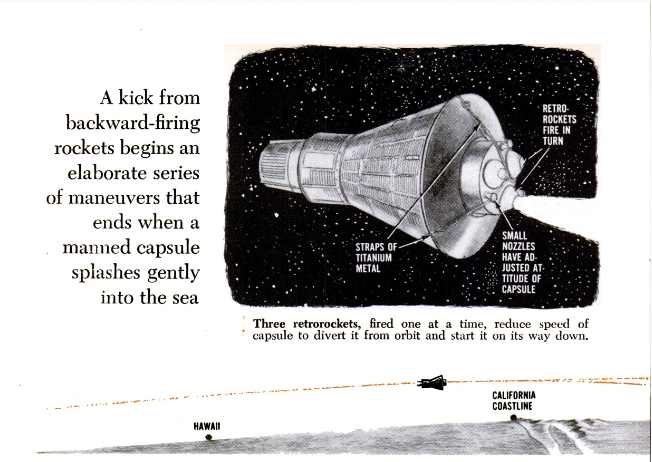 A kick from backward-firing rockets begins an elaborate series of maneuvers that ends when a manned capsule splashes gently into the sea. Three retrorockets, fired one at a time, reduce speed of capsule to divert it from orbit and start it on its way down.

How does anybody make this most spectacular of human falls and come out alive and unharmed? The accompanying drawings show the sequence of actions that makes the awesome descent practical and safe.

The astronaut’s homeward dive begins when he fires three retrorockets attached to the base of his little black spacecraft. Timing is of the utmost importance. He’s traveling five miles per second. An error of one second in firing the retros will land him five miles off target.

As he zooms toward California on his final swing across the Pacific, he makes a time check with Point Arguello, Calif. He then sets a timer to trigger the retrorockets, and braces himself for a hair-raising deceleration.

(If he should be disabled or unconscious, Point Arguello can and will fire the retrorockets by radio command.)

Remember, as this crucial instant nears, that the 12-foot, bell-shaped spacecraft is hurtling along with its six-foot-wide bottom foremost. Its occupant is riding backward, facing the craft’s 28-inch neck. Packed inside one half of that neck lies the eventual means of saving his own.

The retrorockets fire in sequence: at five-second intervals. Their effect is that of applying enormously powerful brakes. When this happened to Col. Glenn’s “Friendship 7” as it rushed toward California from out of the west, he exclaimed into his mike, “It feels like I’m going clear back to Hawaii.”

The dramatically slowed spacecraft now starts descending in a long, flat, continent-spanning arc that ends with a splash in the Atlantic Ocean, off the Bahamas. Normally the retrorockets, in a package attached to the capsule by titanium straps, are dropped off as soon as they have been fired.

The fact that the craft is falling blunt-end forward makes it an aerodynamically rough object, and in itself helps to slow the descent.

Meanwhile, as it plunges deeper through the ever-denser layers of earth’s atmosphere, the friction of its passage threatens to consume it.

The fiber-glass-lined heat shield, a false bottom, turns cherry-red as its temperature rises to 3,000 degrees. Its outer coating peels and burns away. The spacecraft’s own bottom, despite its protective shield, heats to 350-400 degrees. The air inside the craft warms noticeably—in Glenn’s case, to 108 degrees. The astronaut himself, however, remains comfortable in his air-conditioned spacesuit. 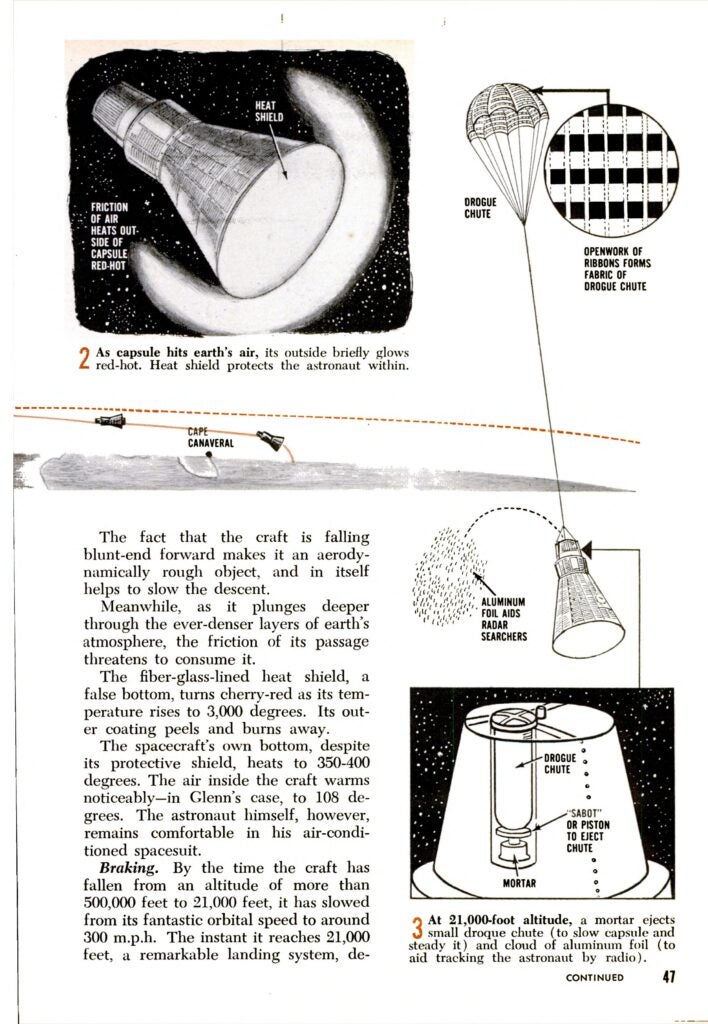 2. As capsule hits earth’s air, its outside briefly glows red-hot. Heat shield protects the astronaut within. 3. At 21,000-foot altitude, a mortar ejects small droque chute (to slow capsule and steady it) and cloud of aluminum foil (to aid tracking the astronaut by radio).

Braking. By the time the craft has fallen from an altitude of more than 500,000 feet to 21,000 feet, it has slowed from its fantastic orbital speed to around 300 m.p.h. The instant it reaches 21,000 feet, a remarkable landing system, developed and built by Northrop’s Ventura Division, goes into action.

At that altitude, a sensitive aneroid switch triggers a tiny mortar. A charge fires a small white drogue parachute out the top of the spacecraft. It’s a ribbon chute. It looks like a bunch of rectanguLar holes stitched together. If it weren’t full of holes, it would be as useless as an umbrella in a hurricane. The drogue is on a 30-foot tether that places it out of the turbulent wake of the plunging spacecraft. It’s only a six-foot parachute at best. The fierce tug on the lines puckers its mouth to four-foot width.

This seems a puny deterrent to speed and gravity, but it steadies the craft and slows it to about 185 m.p.h.

At the moment the drogue chute is flung out, a four-ounce package of shredded aluminum foil is tossed into the air with it. This bursts open and forms a target that looks as big as an airplane to search radars. Now they know about where the spacecraft will come down.

The main chute, a 63-foot-diameter orange-and-white-striped job, streams out of its packing in reefed condition. It might be torn to pieces if unfurled too soon. For four precisely timed seconds, its mouth is not allowed to open more than 10 feet.

Then cutters attached to opposite sides of the big chute automatically knife through the reefing lines. The parachute’s mouth widens abruptly to a 42-foot opening.

“The prettiest ol’ sight you ever saw in your life,” Col. Glenn called it. This great nylon wind catcher hauls back on the spacecraft until it is dropping toward the sea at a gentle 30 feet a second, or 20 1/2 m.p.h.

(If the drogue should fail to open, a red light would warn the astronaut. He then could release the main chute. In the unlikely event that it, too, should fail, he has an identical reserve chute to rely on.) 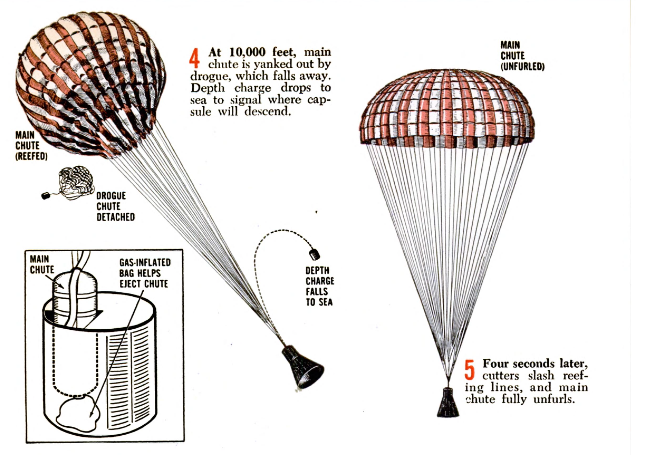 4. At 10,000 feet, main chute is yanked out by drogue, which falls away. Depth charge drops to sea to signal where capsule will descend. 5. Four seconds later, cutters slash reefing lines, and main chute fully unfurls.

Catching the Navy’s ears. As the main chute is pulled out at 10,000 feet, a 3 1/2-pound depth charge, hardly bigger than a man’s fist and wrist, plummets from the spacecraft to the ocean. It plunges 4,000 feet below the surface, and there explodes. Listening sonars on Navy vessels near and far hear the sound and promptly fix its location.

At 8,000 feet above the ocean, the spacecraft’s heat shield drops four feet, pulling down a circular, silicone-coated, glass curtain, nearly its own size—a curtain with diagonal rows of two-inch holes in it.

This is the spacecraft’s impact bag. Air fills the bag on the way down but can’t get out as easily as it got in. Momentarily, as the heat shield strikes the waves, the bag acts like an air cushion. 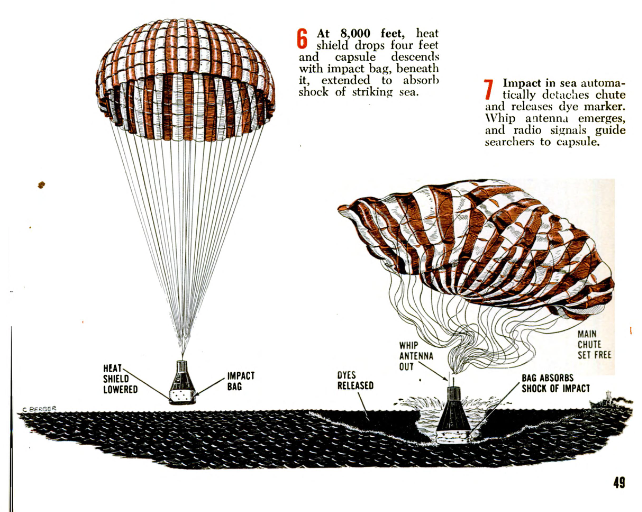 On the water. An inertia switch in the spacecraft senses the landing shock and cuts loose the main chute. If left attached, it might overturn the craft and drown its occupant.

As the spacecraft gently bobs in the ocean swells, the impact bag fills with water. Inside it are powdered dyes–bright green to attract air searchers, black to repel sharks. These dissolve and flood out through the holes in the bag.

The astronaut jettisons his reserve chute. A whip antenna pokes itself out of the half-empty neck of the spacecraft and starts broadcasting sea-air-rescue and homing signals.

Then it’s up to the Navy.