The Suit That Will Help Felix Baumgartner Withstand A 120,000-Foot Free Fall 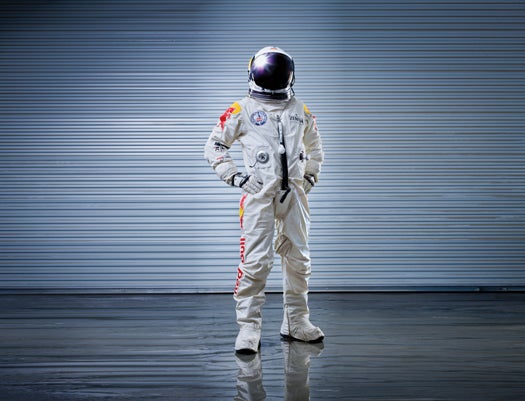 Sometime before the end of this year, skydiver Felix Baumgartner intends to climb into a capsule suspended beneath a helium balloon, rise 23 miles above Roswell, New Mexico, open the capsule door, and jump out. On the 120,000-foot free fall—the longest ever attempted—he will face temperatures as low as –70°F and speeds of more than 700 miles an hour, becoming the first person to accelerate through the sound barrier without a craft.

At the outset of the project, dubbed Stratos by its sponsor, Red Bull, no high-altitude full-pressure suit had ever been built specifically to withstand this kind of controlled free fall. Engineers at the David Clark Company, which builds full-pressure suits for NASA and the Department of Defense, spent four years developing one. Baumgartner’s jump will be the first live trial at Mach speeds.

Suit: It has four layers. The outer layer is made of Nomex, a fire-retardant material that will also act as an insulator. Under the Nomex is a mesh restraint, which holds a gas-filled bladder. The innermost layer is a breathable liner. Once pressurized, the suit will become rigid. Its vertical orientation will help Baumgartner maintain delta position (head down, feet up) throughout his free fall—crucial if he is to avoid a flat spin.

Pressure System: To avoid decompression sickness, hypoxia and tissue damage—all risks associated with drastic changes in atmospheric pressure—Baumgartner will be breathing pure oxygen, and his suit will maintain an internal pressure of 3.5 psi. As he falls, an aneroid valve and a pair of diaphragms will regulate the suit’s internal pressure. When he hits 35,000 feet, it will depressurize, giving him greater mobility.

Chest Pack: The technology hub of the suit, the chest pack contains a voice transmitter and receiver; a high-definition video camera with a superwide 120-degree view; an accelerometer; an inertial-measurement unit that reports pitch and angle; and twin sets of lithium-ion batteries, one to power the visor’s de-icing system and one to power the chest pack itself.

G-Meter: The jump will begin in the stratosphere, where falling objects, less hindered by air density and friction, tend to spin. But a violent spin could whirl Baumgartner into a G-force-induced loss of consciousness, called G-loc, and even rattle him to death. As a precaution, he will wear a G-force meter on his wrist. If it reads 3.5 or more Gs for a period of six seconds, the meter will trigger the release of a three-foot drogue parachute designed to stabilize spins. 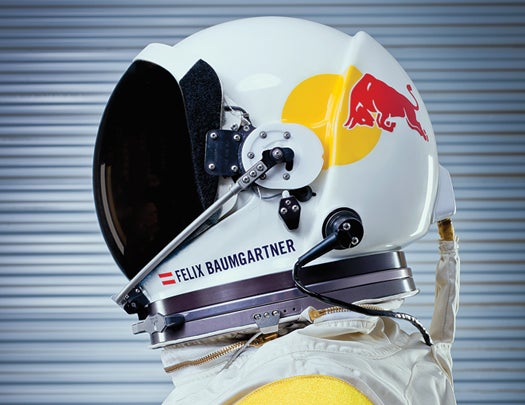 Face Shield: When Baumgartner exits the capsule, the temperature will be –10°F. But by the time he drops to 60,000 or 70,000 feet, where the upper atmosphere begins to reflect heat from the sun, it could plummet to –70°. To prevent his breath from crystallizing on the inside of his faceplate, which would obscure his vision, engineers bonded 110 extremely thin heating wires to the plastic-composite shield.

Parachute System: Baumgartner will carry three parachutes with him: a drogue, a main chute and a reserve. The main and reserve chutes are Baumgartner’s usual nine-cell and seven-cell designs but, for additional stability, are 2.5 times as large. He will have four release handles—two red and two yellow—that he can pull in different situations. For example, the red handle on the right side of his chest releases the main chute and jettisons the drogue; the yellow handle on that same hip cuts the main chute free so the reserve can deploy without tangling. If he goes into a spin and can’t pull his arms toward his body, he can deploy the drogue by tapping a release ring on the suit’s left index finger.