NASA Is Funding A Concept To Turn Asteroids Into Spaceships

So we can mine them 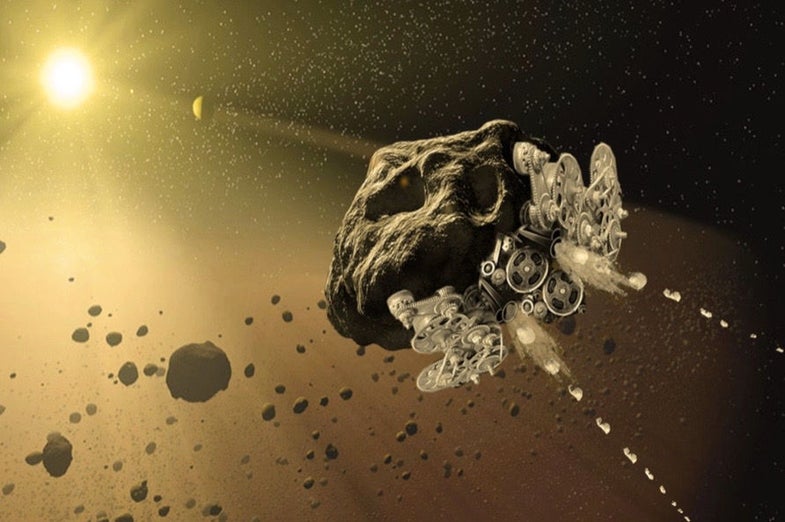 American companies are itching to get their hands on the gold, platinum, and other minerals that asteroids are thought to contain. But although the U.S. has laid the legal groundwork for asteroid mining, the technological challenges are still significant.

One of those challenges is that it’s not going to be very economical or fast to send one spacecraft out to retrieve each asteroid. So Made In Space, a 3D printing company based in Mountain View, California, came up with another solution: why not make the asteroids come to you?

Space.com’s Mike Wall details the concept called RAMA (Reconstituting Asteroids into Mechanical Automata), which would use 3D printing to turn the asteroids into self-flying vehicles.

Like something straight out of a Kim Stanley Robinson novel, a robotic spacecraft would travel to an asteroid, mine some of its resources and use them to 3D print simple propulsion and navigations systems. By launching mass in the opposite direction of travel, just like a rocket does, the asteroids could fly themselves to the nearest mining outpost for processing. Then the 3D printer bot can move on to the next asteroid and repeat.

The concept just received funding through NASA’s Innovative Advanced Concepts program, which will provide $100,000 for feasibility studies. It’s not the craziest idea we’ve heard about using space resources to get around an efficiency problem.

The concept may sound simple, but Wall notes that there will be significant challenges. Read more on Space.com.