Debate: Who Was The Best Captain In Star Trek?

Who best led us where no man has gone before? 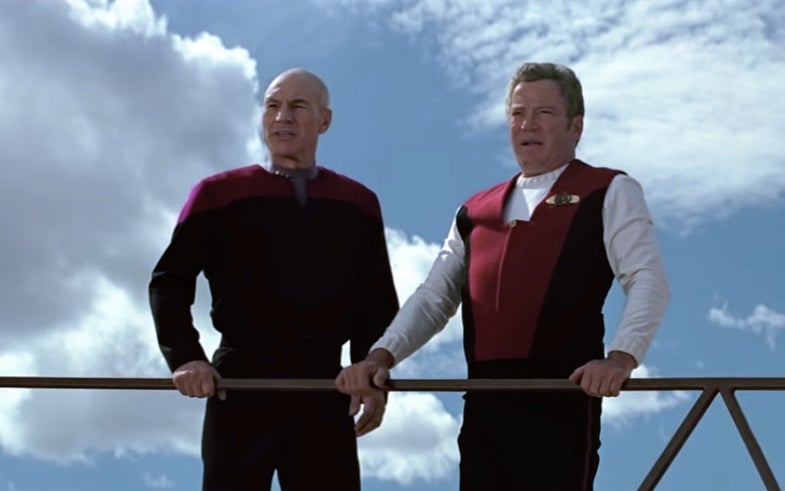 With the release of Star Trek: Beyond on Friday, it’s Star Trek week here at Popular Science. One of the ways our staff is celebrating is by lifting the veil on one of our nerdiest moments yet. Photo Director Thomas Payne, Social Media Editor Jason Lederman, and Assistant Editor Sarah Fecht, along with contributing writers Kelsey D. Atherton and Mary Beth Griggs–all Trekkies–sat down to hash out the best of the best rankings in Starfleet.

With part four, we present our discussion over the best captain in Starfleet history.

(Editor’s Note: Author was not present for debate, and has included his own thoughts and opinions in brackets.)

Jason: Archer. No just kidding. Nobody says Archer. [Apparently nobody says Kirk either…]

Mary Beth: Kelsey, what are you thinking?

Jason: Don’t you dare change your vote. I’ve lost so many. [Note to self: cast deciding vote to crush Jason’s spirit.]

Thom: I’m the biggest Patrick Stewart fan and Jean-Luc Picard is probably one of my favorite characters of anything, anywhere.

Sarah: I love Picard. I do love Picard, but I think that Sisko manages to do…Sisko has sort of a combination of Kirk and Picard. He’s very cool headed, even tempered. Doesn’t go in guns blazing but he does punch people in the face when they need to be punched in the face.

Thom: One of my favorite, I always go back to the quieter moment episodes that I love, like when Picard gets stuck in that probe and he ends up having a family and gets back and at the end of it, ends up with him playing a flute.

Jason: Or the one where he goes to Earth and has to deal with his brother and his family?

Thom: Oh my god that’s a great episode. And then the Sisko ones, I love those same ones. There’s a Sisko episode where Jake gets in the future and they have the whole father son thing and it ends. That episode’s amazing.

Mary Beth: It’s just, I’m tearing up thinking about it.

Thom: Yeah, I love that episode.

Mary Beth: I think it’s interesting, I find it really interesting at least that…

Thom: It’s pretty amazing how it ends. Almost the most tragic of all of them in a way. I mean, he gets what he wants but he has to choose the bigger thing, other than what his physical human needs are. Which is awesome. [Thom please! The spoilers!]

Jason: I think for the same reasons some of us were hesitant about Riker is the same reason we haven’t brought up Kirk. He was the young, handsome, strong leader— [Everyone hates the handsome young strong types. I get that blowback all the time.]

Jason: I mean he’s awesome, don’t get me wrong, but he’s the one who gets the ship into danger most of the time.

Sarah: He’s the one I’d like to go on a date with the most, is Original Series young Kirk. [If that ever happens, don’t wear a red shirt.]

Thom: Deep down inside I think he had it.

[Thom takes a sip of tea]

Thom: I started drinking Earl Grey as a young kid because Picard.

Thom: I also like Picard episode where he’s got the kids and he’s got to take care of kid and the ship’s all..

Thom: So they are all singing “Frere Jacque” inside the turbo lifts as he tries to get them. He’s kind of like…

Mary Beth: I’m a 100%, there’s no question in my mind that Patrick Stewart is a better actor than Avery Brooks.

Thom: Patrick Stewart is a better actor than most people are.

Mary Beth: Than anybody.

Thom: Like all of them. When it comes to Patrick Stewart’s probably one of the best actors than that show’s ever had.

Sarah: Ever. Just ever. He can be very hammy too, though. Like when he’s mind melding with Sarek and he’s like “Waaah.” It’s like a little bad.

Mary Beth: Okay, so why not Janeway or Archer? Just so that we have this on record. [Because they’re not as good as Picard or Kirk or Sisko. There I said it.]

Jason: I’ve brought this up a couple of times. Janeway is very inconsistent character. She makes decisions for one reason in an episode and the next episode she’ll make a decision for the exact opposite reason. She does whatever is needed for the plot. She doesn’t have like very… I think she’s a great character and I like Voyager, which is a risky thing to say sometimes, but she doesn’t have the convictions that Picard has.

Thom: I liked her as a character.

Jason: [Picard] sticks to his morals.

Thom: I just was never fully in love with any of those characters. Maybe. On Voyager.

Sarah: It’s so much easier for me to love DS9 characters because the show shows them kind of with their shirts unbuttoned. You get to know their personal life so much better, so I get a lot more attached to those characters. Picard still seems like an acquaintance to me. You do get some insight to his personality, but it’s not enough for him to feel as real to me.

Mary Beth: Hmm. Yeah. Interesting. I think yeah, where do we stand with this? I think we’ve got two Picard, two Siskos?

Jason: And one Picard / Sisko. Thanks a lot, Kelsey.

Mary Beth: Hopefully Clay will break the tie. [Thanks a lot guys.]

Mary Beth: We can see and maybe he’ll just be really angry and say Captain Archer. [I’m seriously considering it.]

Jason: Oh, but just for record the problem with Archer is he is in this situation where Earth has its ship, it’s ready to go exploring and he feels like the Vulcans are not letting them go. Instead of working with the..is Federation still at that point? [Good point. So not Archer.]

Thom: There is no Federation.

Thom: I think it forms in the very last episode.

Jason: Instead of working with the Starfleet officials, he acts like a child. When your parents says, “Oh don’t do that” and you’re like “I’m going to go do it, you can’t stop me.” That’s the problem with Archer and he is fine leader for those situations, but he lets his emotions get the better of him too often.

Mary Beth: We’ll have to count on Clay to break all these ties. No pressure Clay.

Picard. It was always going to be Picard.

Jean-Luc is one of the smartest and most complex characters in the history of Star Trek, and while he might not be as popular these days as original or rebooted Kirk, I think he set the tone for many leaders in the Star Trek universe that followed. Over his tenure he commanded one of the most diverse crews in series history, he became one of the enemy and essentially managed his PTSD to save the galaxy from the Borg.

Of all the captains, Picard has the most compassionate, sincere relationships with each and every member of his crew. The Kirk years felt like a great team working together; the Picard years felt like family ties.

So there you have it. I suppose I’ll go ready myself for the angry Twitter comments. But I take full responsibility for this… it was… fun.