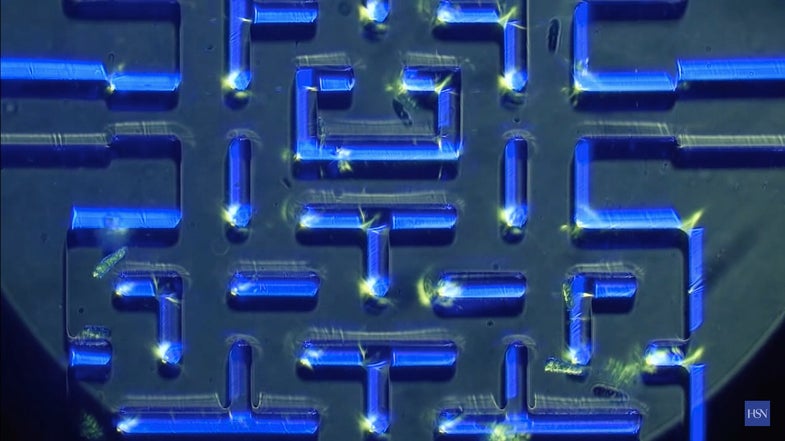 Researchers in Norway built a Pac-Man maze one millimeter across, introduced some microorganisms and their predators into them, and let the game begin. The team wanted to build a more realistic environment in which to observe the organisms interacting with each other and with the world. Youtube
SHARE

It’s not a high-definition remake: this image of tiny single-celled organisms on a Pac-Man board happened in real life.

Researchers from University College Southeast Norway and the Institute of Micro and Nano System Technology actually build a tiny Pac-Man board measuring less than a millimeter across before filling it with microscopic creatures.

You can’t control them, but it’s fascinating (and a bit creepy) to watch Euglena, ciliates, and rotifers wander around the oh-so familiar maze. While the video might give you a creepy-crawly tingle, worry not: there are probably far more microscopic creatures on an old arcade joystick from the original Pac-Man than you could possibly fit in this mini maze.

Still, if this microscopic version of Pac-Man featuring single-celled organisms is a preview of a live action Pac-Man game, no thank you.