Meet The Woman Who Wants To Grow Clothing In A Lab 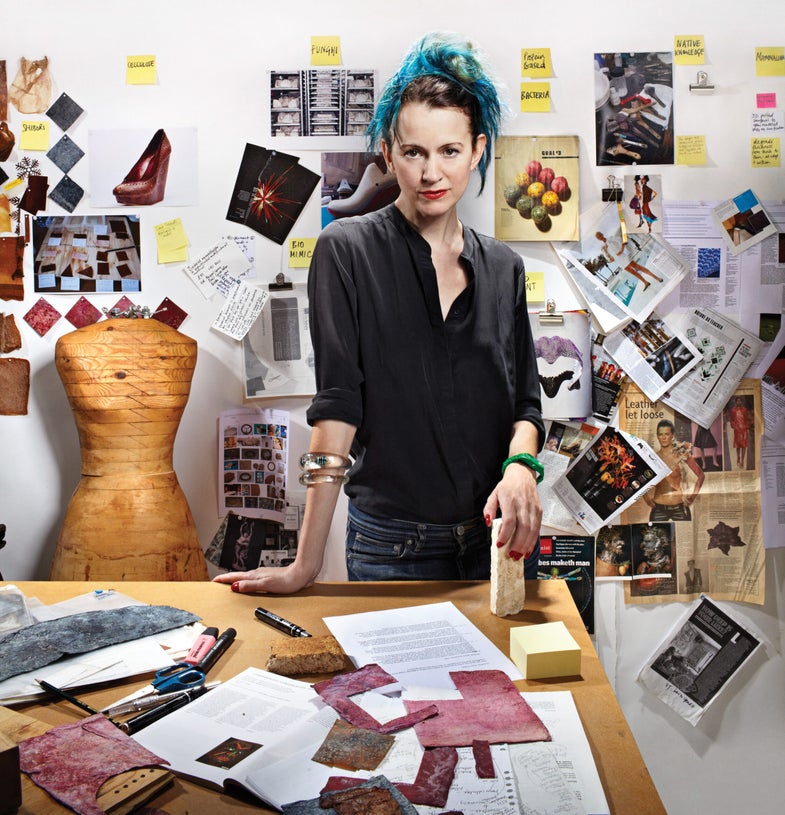 Fashion designers don’t usually give tours of biology laboratories, but on a rainy day this fall, deep in an industrial complex along the Brooklyn waterfront, Suzanne Lee guides me through the warren of labs that make up Modern Meadow. Lee recently joined the biotech start-up as its creative director. Beneath her white lab coat she wears leather pants and a neoprene shirt with a lightning bolt. When I ask what exactly a creative director of a biotech start-up does, she points to a plastic bracelet that encases the husks of three beetles. “Nature is the best designer,” she says. Her job is to make it ready-to-wear.

I follow Lee down fluorescent-lit hallways in the Brooklyn Army Terminal. Since moving in last year, Modern Meadow shares its corner of the complex—at one point the military depot that deployed Elvis Presley—with a company developing an HIV vaccine. The sterile conditions necessary for immunotherapy research make the environment ideal for Lee’s work too. She stops in front of a fridge-size incubator set to 98.6°F, body temperature. Behind the gray door, she explains, bovine cells are dividing and fusing into a dense material similar to cow hide. Lee, in other words, is growing petri plates of leather.

“You can actually have a dress growing in a vat of liquid.”

“Imagine leather that’s as lightweight and transparent as a butterfly wing or has the natural stretch of rubber,” Lee says. “Or imagine a material with the dynamic responsiveness of the skin of a chameleon.” In nature, such qualities arise from the spontaneous assembly of biological cells. By manipulating cell cultures, scientists at Modern Meadow can customize a material’s strength, texture, weight, and elasticity. It’s an idea Lee hopes will take fabric—and with it fashion—in an entirely new direction.

Lee can recall the exact moment her creative pursuits collided with the world of microbiology. Ten years ago, while a senior research fellow at the art school Central Saint Martins, in London, she had a chance encounter with Scottish biologist David Hepworth. She was writing a book about how science and technology could influence fashion, and when she told him about it, Hepworth introduced her to the concept of living materials. He described how organ­isms like bacteria, and not just plants like cotton, could grow cellulose—the most common fiber in the world.

After talking, Lee and Hepworth decided to collaborate on a fashion experiment. They started with tea, then added sugar and microbes, the same bacteria and yeast used to ferment the vinegary health drink kombucha. The microbes eat the sugar and spin cellulose into a dense nano-scale mesh. Although it looks like a gelatinous mat (known as the mother when making kombucha), it’s dozens of times stronger than most fabrics.

They grew the material at home, Lee in her bathtub and Hepworth in his garage. As it dried, it stiffened into a tough substance akin to leather. Lee found it absorbed plant dyes more easily than normal fabric. Also, if she draped the wet material around a dress-form it would knit itself together so that it had no seams at all.

“You can actually have a dress growing in a vat of liquid,” Lee says. “I had never imagined a piece of clothing could be alive. And I have nothing to do with its creation. It’s growing for me.” 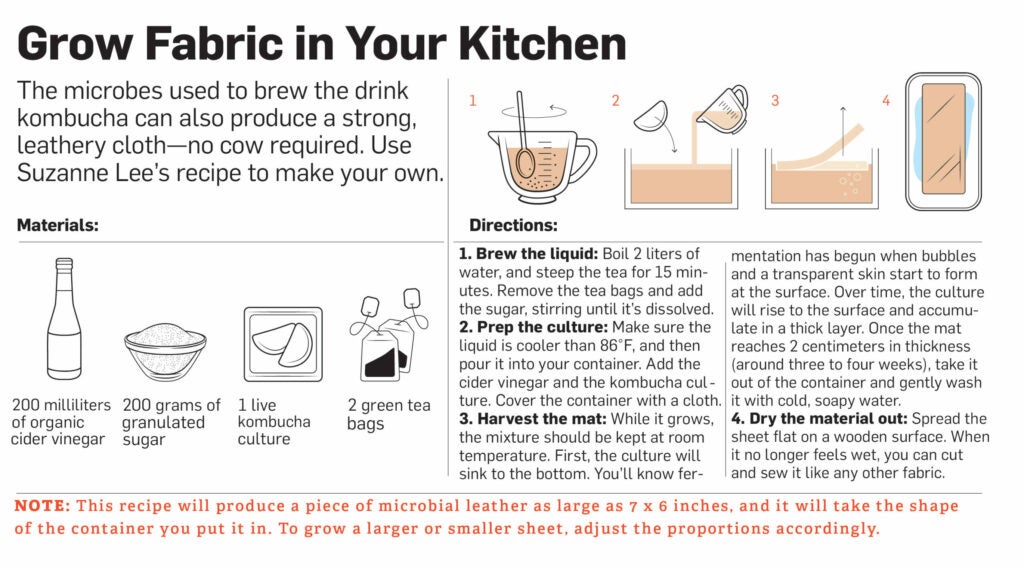 Lee made a collection of coats using the microbial cellulose: a bomber jacket, a denim-style jacket, a biker jacket. Although the designs were conventional, they looked otherworldly and slightly translucent. “Production from bacteria is so alien,” she says, that she wanted to create familiar garments to show it wasn’t so strange.

As Lee worked on her couture pieces, others began to see opportunity in biomaterials as well. Bolt Threads, for example, began engineering microorganisms to produce spider silk. It’s now one of several start-ups attempting to use molecular biology to manufacture fibers similar to scarce natural ones. “What’s fundamentally changed is our ability to look at materials in nature and say, with a straight face, that we can potentially make them with biotech,” says Dan Widmaier, Bolt Threads’s chief executive officer.

That could benefit fabric manufacturers, but more importantly, it could benefit the environment. Most existing materials have a significant downside: Cotton farming typically uses intensive pesticides, and synthetic fabrics such as polyester are made with petroleum. The roughly 14 billion square feet of leather produced from bovines annually, according to the Food and Agriculture Organization, requires millions of animals, consuming billions of gallons of water and pounds of feed a day—to say nothing of the methane emissions. “So it seemed to tick all the boxes,” Lee says of her fabric. “Use less water, hell yeah. Low energy, absolutely. Less chemicals, less dyes. Throw it in the garden when you’re finished with it.”

Lee founded a design consultancy called Biocouture in order to accelerate the development and adoption of new biological materials. But she knew scaling her own product would be an enormous challenge, as would engineering necessary functions like greater elasticity and water resistance. So when her work caught the attention of Andras Forgacs, co-founder of Modern Meadow, she was open to collaboration. The company was attempting to use the tools of regenerative medicine to manufacture meat from bovine cells, and in 2013, Forgacs invited Lee to lead its initiative to produce leather. It would be a departure from her experiments with microbial cellulose, but an opportunity to work with a team of scientists. She quickly signed on.

“Imagine the garment having a layer of living cells that feed off your dead ones to clean and repair itself.”

From her position at the intersection of biotechnology and the fashion industry, Lee has become increasingly confident in the future of biofabrics. She sees athletes searching for a performance edge and fashion designers hunting for surprising new materials as the earliest adopters. In the long term, she envisions dynamic clothing that reacts to our bodies like a second skin. “Imagine the garment having a layer of living cells that feed off your dead ones to clean and repair itself,” she says. “Or it could sense your body temperature, and when you’re cold the cells might reorganize, just as feathers and fur fluff up to act as insulators.”

In December, representatives from at least 25 start-ups joined Lee in New York City for Biofabricate, a summit she organized for people working on new biomaterials. Held in Microsoft’s offices, the conference hosted a pop-up lab with a slew of new products, including bricks grown from fungi and prints using engineered bacteria. “Suzanne Lee is at the forefront of experimentation and innovation,” says Paola Antonelli, a senior curator at the Museum of Modern Art and one of the presenters at Biofabricate. “People can wear a scientific revolution and contemplate in a mirror whether its disruptive potential suits them.”

But first, Lee has to actually grow leather in a lab, and not even that may convince everyone of its value. Oron Catts, an artist and tissue engineer who grew a tiny lab-leather jacket as a critique of biotechnology, argues that cultured material obscures rather than solves sustainability problems. “Western technology is getting better and better at hiding the victims of our consumption,” he says. But he adds: “I’m more than happy to be proven wrong.”

For now, Modern Meadow remains tight-lipped about its actual progress, and the only evidence of leather I see during my trip to the Brooklyn Army Terminal are shoelace-thin strips floating in test tubes. But when Lee looks around the lab, surrounded by pipettes and fume hoods, flasks and centrifuges, she doesn’t seem at all daunted by the enormity of the task ahead. “This is potentially revolutionary,” she says, then laughs. “Oh lord, there’s a fashion designer trying to save the world.”

This article was originally published in the March 2015 issue of Popular Science, under the title “Cultured Couture.”