The final frontier is a photographic nightmare When South by Southwest teased a panel about space photography this Friday, we had to attend. During said event, NASA announced a new partnership with the Houston Cinema Arts Society to launch CineSpace–a competition for short films that use NASA’s vast archive of photos and videos.

But to help the audience understand how NASA gathers and maintains so much imagery, astronaut Don Pettit stepped up to the stage. Pettit has 370 days in orbit under his belt, during which time he took some breathtaking photos. And, according to him, taking a great snapshot while hurtling through space isn’t nearly as simple as it is on Earth.

Darkness is a constant battle. And it gets even trickier when both you and your subject are moving. “Think about optimizing cameras for nighttime photography,” Pettit says. Photographing cities at night, for example, poses extra difficulties because of the long exposures and inherent movement of being on the International Space Station (ISS).

To smoothly follow his subjects, Pettit hacked together a precision gimbaling device. Using a Hassleblad camera as a viewfinder hooked up to another camera, he created barn door tracker, a device typically used by astronomers on Earth to track and photograph objects in the sky. Pettit turned the contraption on its head to photograph Earth from an object in the sky. The rig also included a threaded bolt he snagged from a resupply vehicle that was slated to burn up in the atmosphere. “I figured they wouldn’t miss that one little bolt,” he says. 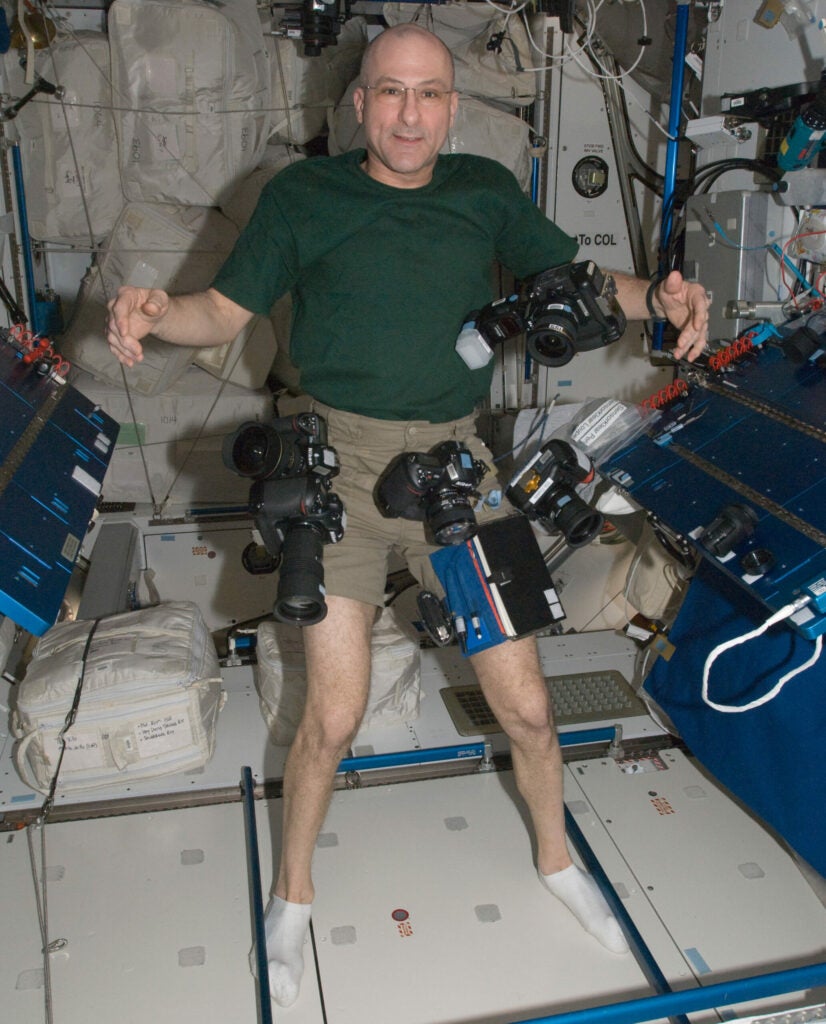 NASA astronaut Don Pettit, Expedition 31 flight engineer, with his cameras on the ISS in May 2012.

Once you’ve got darkness and movement down, reflections create a special kind of photographic hell. The cupola of the ISS makes for a perfect viewer of planet Earth, but its seven windows can lead to some serious shine issues. “(This is) the bane of photography out the windows while in orbit. In the cupola, you have four panes of glass, and you want four panes of glass because there’s a pretty good vacuum on the other side,” Pettit says, but it compounds reflections. So he fashioned what a “zero-gravity turtleneck” out of pieces of dark fabric to combat glare.

Space really gives photographers no break; on top of all this, cosmic rays destroy cameras. Pettit says any camera that’s spent a year beyond Earth’s protective atmosphere has severely damaged detector array chips, thanks to pummeling by cosmic rays. This makes images with bright red, green, and blue pixels dotting the frame. Editing can take care of that, Pettit says, but NASA ends up shipping about 10 new cameras to the ISS every year. The old cameras? Those are sent to die a glorious death as a shooting star by burning up in Earth’s atmosphere.

Finally, says Pettit, you’ve always got to be prepared. He suggests we future astronauts keep our cameras around all the time, and ensure we have a wide variety of lenses at the ready. Earth goes by quickly–so if you need to stop to turn on a camera or change a lens, you might miss your shot.

To sift through some space imagery yourself, peruse NASA’s CineSpace database here, which will be relaunched later this summer with an improved search interface. And if you feel particularly inspired, you can enter the competition with a chance to win cash prizes–and maybe even get your film screened on the ISS.