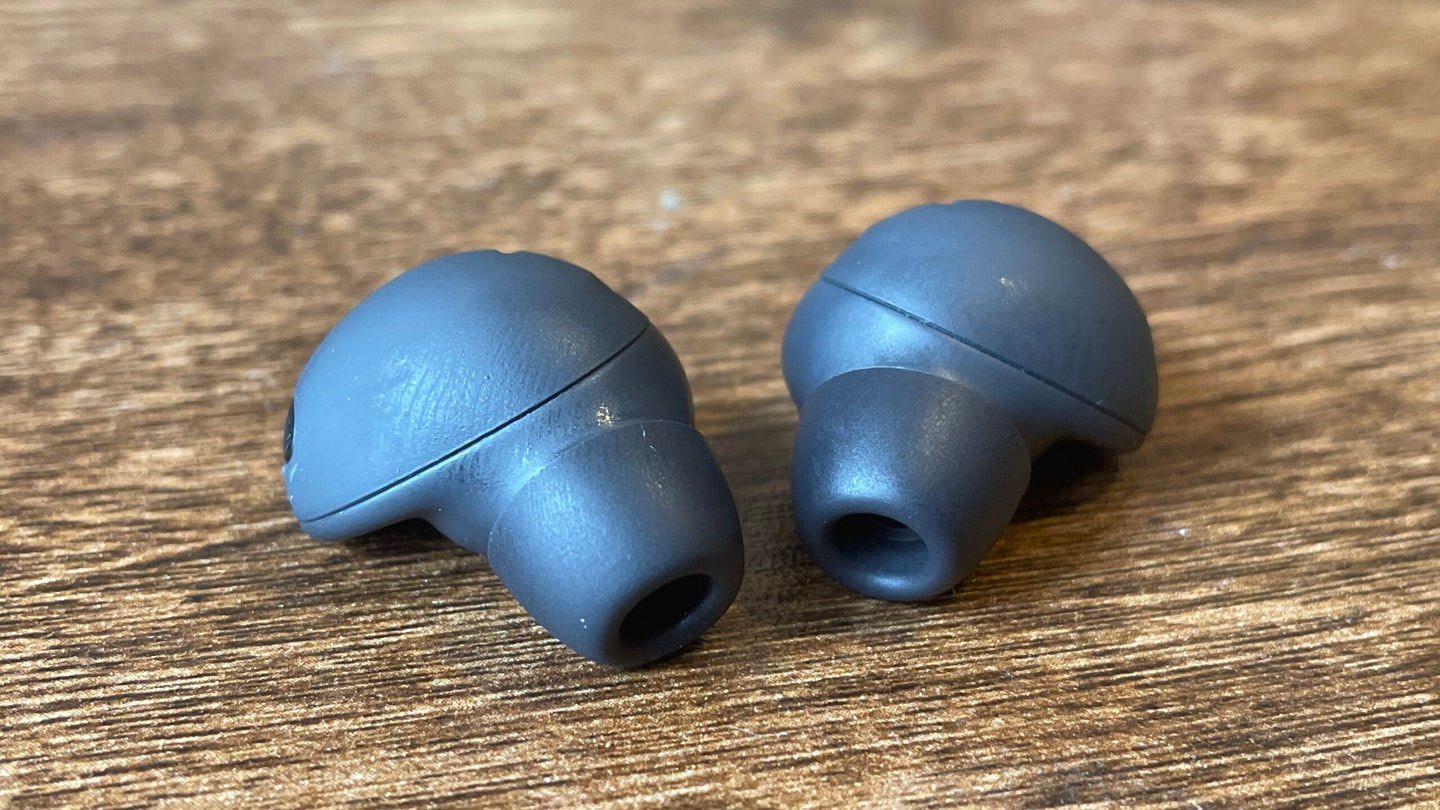 Samsung’s newest true wireless earbuds feature the “Pro” moniker found on Apple’s Airpods Pro and Google’s Pixel Buds Pro. On its competitors, the pro designation primarily corresponds to a specific upgrade: active noise canceling, which helps negate unwanted sound by generating an inverted sound wave. The Galaxy Buds2 already had that feature, so I was unsure how the Buds2 Pro could really live up to the name. Truth be told, I’m still not sure that the primary tweaks—which include support for 24-bit high-fidelity audio and a smaller, more comfortable shape—are worthy of such a designation. That said, the constellation of small changes in the Samsung Galaxy Buds2 Pro puts them in the pantheon of the best noise-canceling earbuds.

It turns out that the Galaxy Buds2’s new design creates an extremely comfortable fit, leaves room for ample battery life, and enables a whole host of connectivity features. Like AirPods, many of the Buds2’s most interesting features only work with modern Samsung Galaxy devices, which limits their wider utility. That said, they sound great on any device, with very clear, strong bass that delivers body without overpowering your favorite songs or movies. While they are slightly more expensive than their most direct competitors, the Samsung Galaxy Buds2 Pro embody that uncanny balance between effortless comfort and robust sound that make a high-end earbud worthwhile.

The Galaxy Buds2 Pro just fit right. According to Samsung, the design is 15 percent smaller than last year’s Galaxy Buds2, and that more compact size—each bud weighs a little over 5g—sits light but tight in my ear. They’re perfectly positioned, which means they don’t even move when I shake my head or walk around. Though they feel flush, there’s very little pressure buildup in my ear, even when I wear them for many hours. Presumably, that’s partially because the Buds2 Pro have a large grill on top that allows for more airflow, which relieves pressure and allows for better overall sound quality.

They also look better than most earbuds. The small egg-shaped bud sits comparatively flat against your ear, without any AirPod-esque stalks or other massive protrusions. The matte plastic chassis also seems a bit more discreet than other buds; mine are black, but they also come in white and a lavender-like “Bora Purple.”

The Buds2 Pro also features a higher water resistance rating: IPX7 versus the IPX2 on the Buds2. Technically, that’s enough for the Buds2 (not the charging case) to withstand full submersion in 3 feet of fresh water for up to 30 minutes. In practical terms, you can now wear your Galaxy Buds in the shower. However, that X means they are still potentially susceptible to damage by dust and other particles, so don’t dunk them in the sand at the beach.

Like most buds, the Galaxy Buds2 Pro come with a matching charging case. The redesigned case is smaller than average—a little 2 x 2 x 1-inch square that supports USB-C and wireless charging. It’s covered with a rubberized matte plastic, which makes it grippy in your hand or on your desk.

Speaking of charging, the Buds2 Pro feature 61mAh batteries to deliver an estimated 5-8 hours of audio playback—music, podcasts, etc. (the upper range with ANC off)—or 3.5 to 4 hours of calling time. The charging case has a 500mAh battery, which Samsung estimates should store an additional 20-30 hours of battery power for audio playback, or approximately additional four power cycles. The Buds2 Pro’s stats here lags behind both the AirPods Pro and Pixel Buds Pro by a small margin, but the long-term battery life with the case theoretically offers the longest of the three. For me, it was enough time for my commutes, long walks, and errand runs. As with most earbuds, you have to make sure you charge them between uses in the case and charge the case at least once every few days.

Better with Galaxy, not as good with other devices

The best (and arguably worst) aspect of the Galaxy Buds2 Pro is the increasingly large number of features that only work when you pair them with a relatively new Samsung Galaxy phone, like the Galaxy S22, Galaxy Flip4, or Galaxy Fold4. Some of them mirror the iOS-exclusive aspects of AirPods, such as easy, one-button pairing and the “Smart Things Find” ability to track your lost buds, a la Apple’s “Find My” feature.

The Galaxy Buds2 Pro reserves many of its most lux audio features for Galaxy phone users, including spatial audio (Dolby Atmos-encoded tracks) and head tracking, which automatically repositions virtual speakers when you turn your head during a song. Chief among the exclusives is the Buds2 Pro’s 24-bit high-fidelity audio, arguably the most “Pro” thing about them, which is based on a proprietary Samsung codec called SSC Hi-Fi. This “seamless” scalable format works with a Samsung Galaxy device with One UI version 4.0 or higher. With other devices, the Buds2 Pro support Bluetooth 5.3 with the AAC and SBC codecs and will get LE Audio via firmware once available, which is still an improvement over the Buds2.

Like the AirPods Pro and other similarly priced ANC earbuds, the Galaxy Buds2 Pro deliver surprisingly nuanced sound, whether or not you have hi-fidelity audio files that take advantage of the Buds2 Pro’s 24-bit audio support. Listening to currently out-of-date dance tracks like A-Trak’s remix of the Yeah Yeah Yeahs’ “Heads Will Roll,” you’ll notice a very even sound with a strong hit of bass. The bass notes are especially notable because, while deep, they don’t punch as hard as other Bluetooth earbuds, though this isn’t necessarily a bad thing. The bass doesn’t get fuzzy or garbled at high volume, and never overpowers a song. I also tested it with a few podcasts—including PopSci’s “The Weirdest Thing,” of course—and found that its very balanced sound profile, with nicely textured mids and highs, was a great fit for long, vocal-heavy listens.

Helping maintain that clarity and kick is a dual-dynamic driver design—pairing a 10mm woofer and 5.3mm tweeter in each earbud—that is tuned by venerable acoustics engineering/professional studio components manufacturing company AKG (now a subsidiary of a subsidiary of Samsung). After listening on and off of Galaxy devices to separate out a 16- and 24-bit listening experience, I’d proffer the difference between the two, at least in this instance, is very subtle. I could make out a small amount of instrumentation separation in tracks, but it is something you have to listen intently for. That’s the definition of an audiophile feature … or maybe a “pro” one?

So, who should buy the Samsung Galaxy Buds2 Pro?

The Samsung Galaxy Buds2 Pro should be the go-to earbud for anyone that has bought the last couple generations of Samsung Galaxy phones. They offer an amazing fit and deliver a wide array of convenient features that you wouldn’t find outside of pairing an iPhone and Airpods Pro.

The biggest question is whether they are worth it if you’re using a different phone—and that’s a tougher thing to answer. The new shape of the earbuds alone may be worth the price of admission, especially if you normally find earbuds uncomfortable or they just fall out. They also sound great, even-keeled with deep bass that doesn’t distort when you crank up the volume. That said, with a $229.99 starting price, they aren’t exactly cheap and it wouldn’t feel right to suggest buying them when you won’t gain access to the full range of features. It’s a shame, really, that Samsung locked so many features into its ecosystem: If you could get the most out of the Samsung Galaxy Buds2 Pro on any device, they’d be true knockouts.