The Marshall Emberton speaker is a great-sounding Bluetooth speaker and has the looks to match. 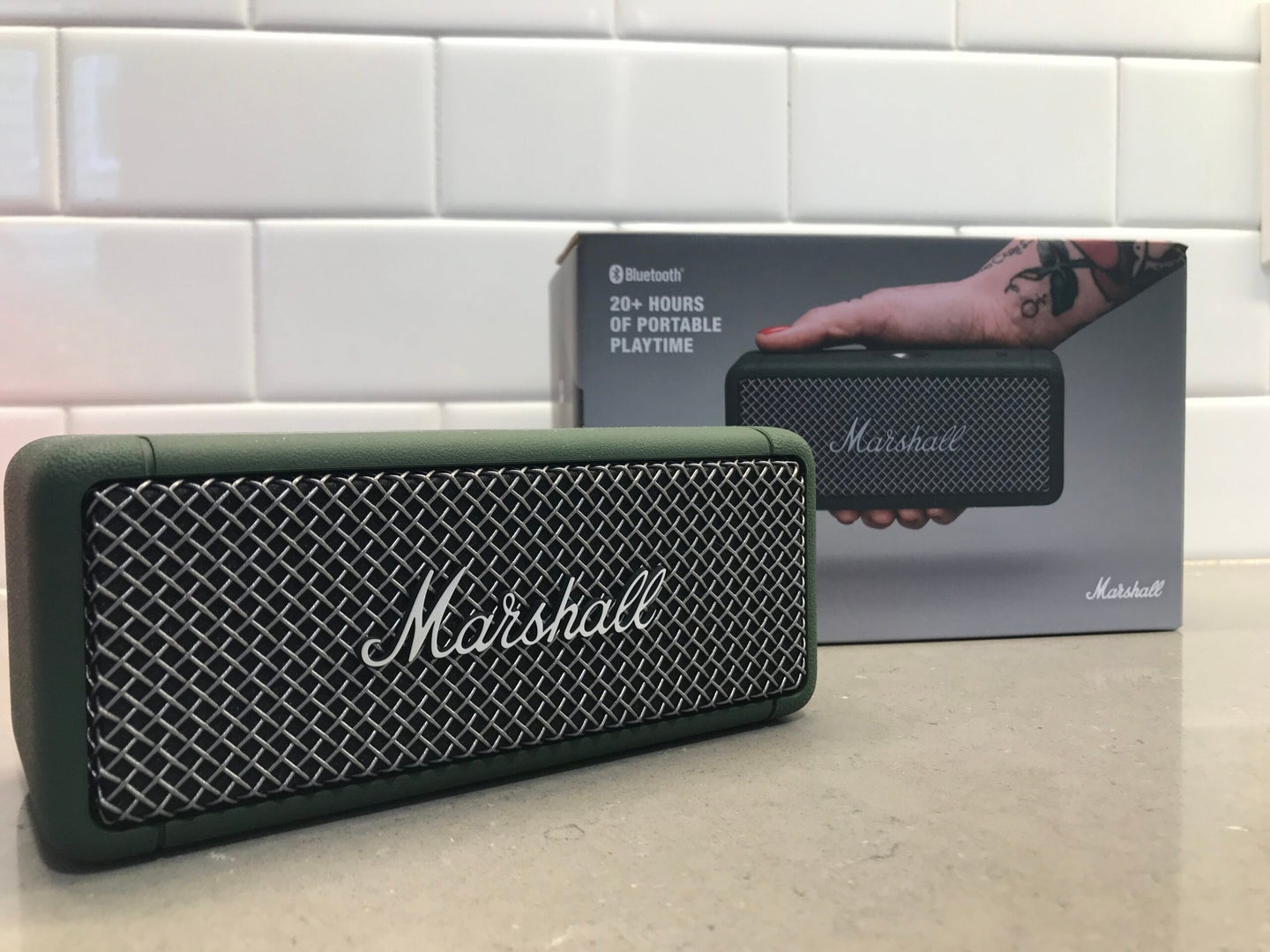 Smartphones have become entrenched at the epicenter of personal entertainment. Unfortunately, their tinny built-in speakers can’t match the HD quality of video streaming or gaming they can deliver. As a result, the portable Bluetooth speaker market is growing like wild to make up for the sonic limitations. According to reports, the global Bluetooth speaker market is expected to grow at a compound annual growth rate of 10 percent from 2019 to 2025. But, even the best Bluetooth speaker won’t get much use if it’s ugly. That’s where the Marshall Emberton speaker comes in.

There are plenty of options if you’re in the market for a speaker that suits your specific needs and meshes well with your personal style—but you’re not likely to find one more stylish than the Emberton. Far from the typical “party speaker” with its loud accents, the Marshall speaker is modeled after the company’s iconic guitar amplifiers that have been a mainstay of the live rock experience since Jim Marshall (the “Lord of Loud”) invented them in the 1960s.

Marshall has been tapping into its long and distinguished history in the audio industry to produce consumer-facing headphones and speakers since the early 2010s. The Marshall Emberton speaker is the smallest and most portable of the Marshall Bluetooth speakers, intended to be something you can carry easily from room to room or home to gathering, connect to quickly, and use immediately right out of the box. At 2.68 inches by 6.30 inches by 2.99 inches and 1.5 pounds (technically 24.6 ounces), it’s closer to palm-sized and lighter than the still-portable 3-pound, strap-equipped Stockwell II or the comparatively massive 10.8-pound Tufton (not to mention the 18.85-pound room centerpiece that is the Woburn II).

And since Marshall is a performance audio-focused company first and foremost, it’s most interested in creating the best-sounding Bluetooth speaker without piling on the bells and whistles. The result: a simple speaker with a really impressive sound. Behind the metal grille (with signature Marshall logo) are two 2-inch 10W drivers and two passive radiators that deliver that crunch.

Not to make the Marshall Emberton seem shallow, but one of its biggest selling points is just how amazing it looks and feels. It evokes a tiny, squat Marshall amp, while it’s not heavy at all. Nonetheless, it feels solid; there is nothing delicate at all about this Marshall speaker—from the overall construction to the buttons it feels like something you can pick up, move, and fiddle with without having to fret about its durability.

Inside the box, a USB-C cable is supplied for power. Fully charged (which takes about three hours from empty), the Marshall Emberton claims over 20 hours of playtime. And it charges fast—after plugging it in for an hour, I went through three days of moderate use before I needed to charge it again (and even then, the indicator lights were only low, not completely sapped). A readout on the top of the speaker looks like a volume meter, but it’s actually a visual indicator of remaining battery life (presented in 10-percent increments). That’s a surprisingly rare and undeniably handy feature if you don’t want your speaker to suddenly crap out during a party.

Once you start using the Emberton Bluetooth speaker, the small details start to reveal themselves. In addition to looking like the speaker was just unloaded off a truck by a tattooed roadie, when you turn the speaker on (by pressing the top button and holding it for three seconds), the Emberton announces itself as ready to go by playing a quick guitar strum. It sounds like a guitarist warming up during soundcheck and it sets a tone and is just very, very cool.

Setup of this Marshall Bluetooth speaker

This Marshall Emberton Bluetooth speaker comes with a basic manual, but you won’t likely need it. Charge the wireless speaker for a few minutes, turn it on then press the Bluetooth button till the indicator light blinks, locate the name “EMBERTON” in your smartphone’s Bluetooth settings, connect, and go. It’s really that simple (the Bluetooth 5.0 connection uses the SBC codec, which isn’t the most high-resolution but is universal and stable). After you hear the signature guitar strum (and a quick “beep” to let you know that it’s also found your smartphone), you can log in to Spotify or whatever music or entertainment app you wish and start playing immediately.

Of course, there is only one true test for a speaker of any kind: How does it sound? And here is where the Marshall speaker lives up to its lineage. It’s a pleasure to report that the Emberton deserves to be part of the Marshall Bluetooth speaker family, hell, just the Marshall family in general.

A Marshall stack of features

Right from the start, the Marshall Emberton delivers a deep, rich sound, with enough bass to make its presence felt but not enough to overpower your tracks. There’s a slight boost at both ends of the spectrum, which isn’t unusual among small speakers expected to be used outdoors, where they compete with environmental noise. The multidirectional sound (what Marshall calls “True Stereophonic”) was nicely balanced, so you could really place the speaker anywhere and get great sound.

Even though midrange is ever-so-slightly recessed compared to bass and treble, instruments and vocals had great separation, sounding crisp and detailed. I tried it out with a mixture of rock, EDM, and hip-hop and found each of them was treated well (though the strutting guitar/bass interplay of a song such as AC/DC’s “Back In Black” really benefited from the speaker’s tuning—I mean, it’s a Marshall). Podcast voices, too, were clear and distinct—the speaker never wavered even in those situations where show audio shifted from music or bursts of noise back to general conversation. Someone craving a perfectly flat response may find it a touch pushed toward a party-friendly tone, but that’s common in speakers like this and it’s not oversaturated.

With a max output of 87 dB, it’s not the loudest portable Bluetooth speaker, but it can fill a room or a yard easily, and become your sole music source. That’s a decent loudness level for a speaker this size—right in line with the Amazon Echo Studio (90 dB) or the Sonos Move (85 dB). Just note that when streaming music was cranked to the highest levels, the speaker didn’t crackle or get distorted, but the sharpness of the streaming audio made it sharp and not something you’d want to leave at 11 for too long.

If there’s a minor criticism to be made, it’s that the Marshall Emberton doesn’t allow you to make any adjustments to bass or treble levels (a feature that is available via knobs throughout Marshall’s larger speaker line starting with the Stockwell II model). In its quest to be a simple, portable plug-and-play speaker, it sacrificed the ability for endless tweaking and fiddling of the levels, but Marshall trusts that you know that it knows what it’s doing and that is being the best Bluetooth speaker for someone that wants balance with a little bite.

The circular, multidirectional knob on top of the minimally designed speaker allows you complete control over your music. Rather than going back to your phone to skip tracks or adjust the volume, you do it all through the speaker. Press the button up or down to raise and lower the volume, and press it right or left to skip tracks. It’s convenient and adds to the speaker’s overall intuitive useability.

Everything else about the Marshall Emberton

The Marshall Emberton’s thick hide and metal-grated front plate make it feel like you don’t have to treat it with kid gloves. You really can take it, and play it, pretty much anywhere. In the living room, by the pool, even in the shower. It’s water-resistant with an IPX7 rating—meaning it can be submerged up to a depth of one meter for up to 30 minutes. You won’t be hosting any all-nighters in the Coral Reef, and the speaker doesn’t actually float, but if it slid into your tub and you fish it out quickly enough you wouldn’t be out $150. This is comparable waterproofing to the $119.95 JBL Flip 5 (a true “party speaker”), as well as the $149 UE Boom (another cylinder with more bold low-end, but some EQ options). With companies like IKEA trying to find ways to hide Bluetooth speakers by making them part of lamps and other devices, the Marshall Emberton stands out as one you want to show off. It has unique styling and backs it up. You won’t get features like a microphone for answering calls or giving voice commands, etc., but it’s a Bluetooth speaker—your phone is always close at hand.

So, who should buy the Marshall Emberton?

The Marshall Emberton speaker is the best portable Bluetooth speaker for someone who wants stylish looks and isn’t a control freak when it comes to levels. And there’s no reason to be, as it’s also one of the best-sounding Bluetooth speakers I’ve heard at its size. It’s simple to use and very cool to look at—making it the best Bluetooth speaker for people who want something that can become part of their home’s overall look and vibe. It combines a classic rock feel with modern Bluetooth capabilities, so it’s a great bridge between retro and modern.