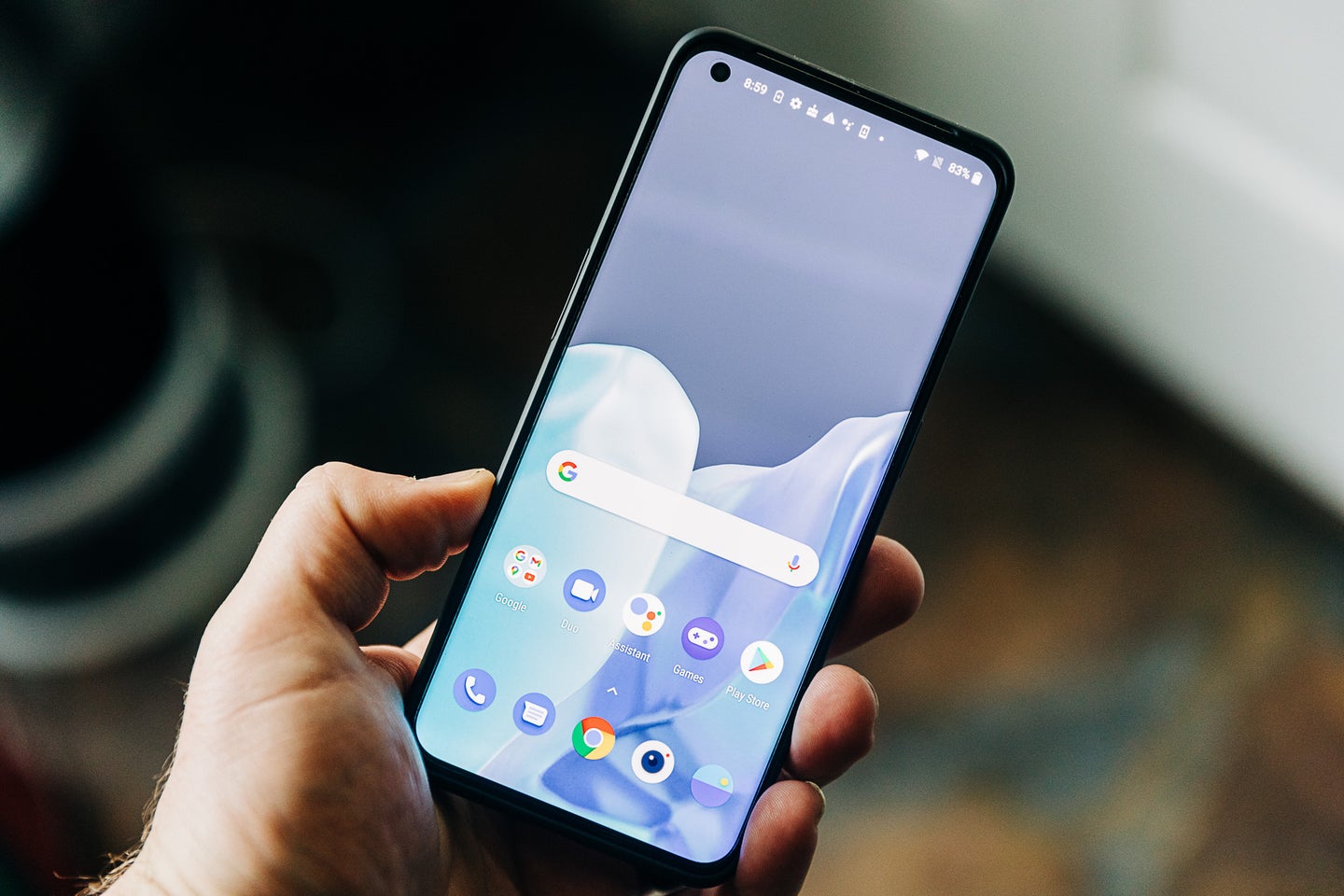 Here in 2021, it’s difficult for flagship Android phones to stand out based on specs alone. Most top manufacturers rely on similar hardware. Look inside the OnePlus 9 Pro and you’ll find a Qualcomm Snapdragon 888 processor. That matches the chip you’ll find in its biggest competition, the Samung Galaxy S21. And while these phones aren’t exactly breaking molds with every new version, they do provide more choice when it comes to high-end Android devices, and that’s always a good thing.

In short, the OnePlus 9 Pro smartphone is easily one of the best overall Android devices on the market. It’s not perfect, but it is pretty great. But, is it right for you?

What is the OnePlus 9 Pro smartphone?

Pick up the OnePlus 9 Pro and it feels familiar. It’s 2.89 inches wide, 6.4 inches tall, and roughly a third of an inch thick. That can be hard to picture, but it’s slightly narrower than the OnePlus 8 Pro that came before it and the Samsung Galaxy S21.

As the “Pro” suggests in its name, this is the very top of the OnePlus heap. Its primary brag over the rest of the lineup consists of an upgraded camera that the company claims to have developed with iconic Swedish camera maker, Hasselblad.

The base model OnePlus 9 Pro comes with 8 GB RAM and 128 GB storage. You can spend an extra $100 or so to get 12 GB RAM and 256 GB storage. If you plan to use this phone for several years, that seems like a worthy upgrade to me.

The screen measures 6.7 inches and offers a 3,216 x 1440 resolution. It’s a little skinnier than I’m used to, but I actually prefer that. Even though I have fairly solid thumb reach, I found the slightly skinny OnePlus 9 Pro less harrowing to use one-handed than some of its thicker competition.

Its 525 PPI is plenty dense, so you’ll never notice individual pixels with your naked eyes unless you’re some kind of superhero whose powers include nitpicking smartphone displays. The OnePlus screen also boasts a variable refresh rate. It can go from the smooth-scrolling 120 Hz down to just 1 Hz to save battery. That feature comes from the inclusion of a technology called low-temperature polycrystalline oxide, which Samsung first started using in its Note series smartphones last year. You won’t find this tech inside the regular OnePlus 9, so only the Pro version enjoys the performance and battery advantages it offers.

Overall, the screen is bright, easy to read under a variety of conditions, and provides smooth motion in just about every situation. I still don’t really like the front-facing camera poking through a hole in the display, but that’s certainly not unique to the OnePlus and I also seem to be in the minority with my griping.

As stated above, the OnePlus 9 Pro relies on the Qualcomm Snapdragon 888 processor, which also appears in the Samsung Galaxy S21 smartphone. Combined with 8 GB or 12 GB RAM, it has more than enough power for any task you plan on doing with an Android phone. Check the Geekbench benchmarking charts and you’ll find that the OnePlus 9 Pro is among the fastest devices available at the moment, even if the iPhone 12 Pro models beat it when it comes to pure speed.

Benchmark numbers rarely translate directly into the real world, however. I used the OnePlus 9 Pro as my daily driver phone for several weeks and put it through a number of resource-intensive activities. It handled video editing in Adobe’s Premiere Rush app as well as several hours (oops) of Magic: Arena among other graphics-heavy titles. In every case, the OnePlus 9 Pro handled the loads just fine. That’s what you’d expect and the phone delivered.

Part of that speedy performance comes from OnePlus’s ability to resist cramming its devices full of bloatware. It runs Android 11, but also employs OnePlus’s own OxygenOS, which adds some smart tweaks to the system.

For instance, you can keep two versions of the same app installed in case you want to access the platform with two accounts without constantly having to switch profiles or sign in and out. That’s surprisingly handy, which is more than I can say for most features that come piled on top of the vanilla Android experience.

What about the OnePlus 9 Pro camera?

This is where flagship smartphones have it out these days. OnePlus tapped iconic camera maker Hasselblad to help out with its smartphone cameras as part of a deal that it says will last years. This is supposedly just the first step.

Don’t get too excited if you’re a camera nerd. Hasselblad didn’t build the hardware that’s in the OnePlus device. Instead, the Swedish camera manufacturer helped OnePlus with the color science that went into the overall camera system.

The OnePlus 9 Pro offers three main cameras. The main module sports a 48-megapixel capture behind a wide-angle, f/1.8 lens with optical image stabilization. The super-wide camera sports a 50-megapixel resolution and a fixed f/2.2 aperture. The telephoto camera rounds out the hardware with a smaller 12-megapixel resolution and a fixed f/2.4 aperture. While those megapixel counts are definitely high, the lenses offer some familiar focal lengths, so you can expect a relatively similar experience to other flagship devices like the iPhone 12 Pro Max and the Samsung Galaxy S21.

When it comes to overall imaging performance, I found the OnePlus 9 Pro impressive. Whether it’s due to the Hasselblad involvement or not, I liked the relatively natural color and tone reproduction the main camera offers. It provides a result that’s closer to what I’d expect from a dedicated camera without the overly ambitious color enhancements Samsung typically applies. It also doesn’t fall into the trap of overdoing it with HDR-like the iPhone camera sometimes does.

I was particularly impressed with the super-wide lens. OnePlus did a really solid job toning down the typical distortion that usually appears around the edges of a super-wide frame. Because it uses an unusually large sensor, the image quality is also above average. If you’re particularly interested in the super-wide-angle views, the 9 Pro is worth strong consideration.

Zooming, however, is another story. When it comes to reach, the Samsung Galaxy S21 Ultra is the champ. It has a true optical zoom lens that handily beats most other devices around. The OnePlus 9 Pro isn’t bad, it’s just not close to the Samsung GOAT this time around.

In addition to the typical camera sensors, OnePlus included a 2-megapixel monochrome sensor it can use to help make more authentic black-and-white images. It’s good at what it does, but black-and-white conversions have gotten very good–especially with editing presets–that I wouldn’t expect to use it very often.

The 9 Pro shoots up to 8K video, but again, I don’t find all that resolution particularly useful. Shooting 4K at up to 120 fps is intriguing, however. High-res, slow-motion footage tends to look really cool if you have enough light for it. You can get even slower, too. Dial the resolution down to 720p and you can go all the way up to 480 fps. That’s 16x slower than real life. Pretty much everything that happens quickly looks cool when recorded at that speed.

The OnePlus 9 Pro charges so quickly that it’s almost funny. The phone ships with a 65T Warp Charge unit that promises to take the phone from totally dead to 100 percent in just over a half-hour. I tried it and in less than 40 minutes, the phone went from zero to 100 percent. It only took 7 minutes for it to hit 20 percent. It’s bonkers.

You can only achieve those speeds with the dedicated charger, though. Switch to a third-party plug and you’re handcuffed down to a familiar 18 watts.

If you’re willing to shell out some extra cash, you can also get super-fast wireless charging. The $70 Warp Charge 50 Wireless Charger can take a 9 Pro device from zero to 100 percent in well under an hour without having to plug it in. It will certainly generate some heat in the process, but that’s seriously fast.

That fast charging makes up for the fact that the battery itself isn’t huge. I had no problem getting a full day and night of use, but I still felt better putting the phone on the charger every night.

Who should buy the OnePlus 9 Pro

If you’re in the market for a flagship Android phone, then the OnePlus 9 Pro should be in contention. Compared to the Samsung Galaxy 21, you’ll get a similarly beautiful screen, fast performance, and extremely capable cameras that excel in most situations. Samsung still has the edge in a few spots, particularly when it comes to the built-in zoom lens and compatibility with the company’s S Pen stylus. But, OnePlus has a cleaner version of Android, and that borderline bananas charging speed.

While there’s very little to complain about here, it’s important to remember that we’re talking about a phone that will cost you roughly $1,000. As always, it’s worth really analyzing whether those features and spec bumps are worth spending the extra cash over something like the much cheaper Nord 2 when it hits the US.