The Samsung Galaxy Z Flip4 is all about flip-phone nostalgia. 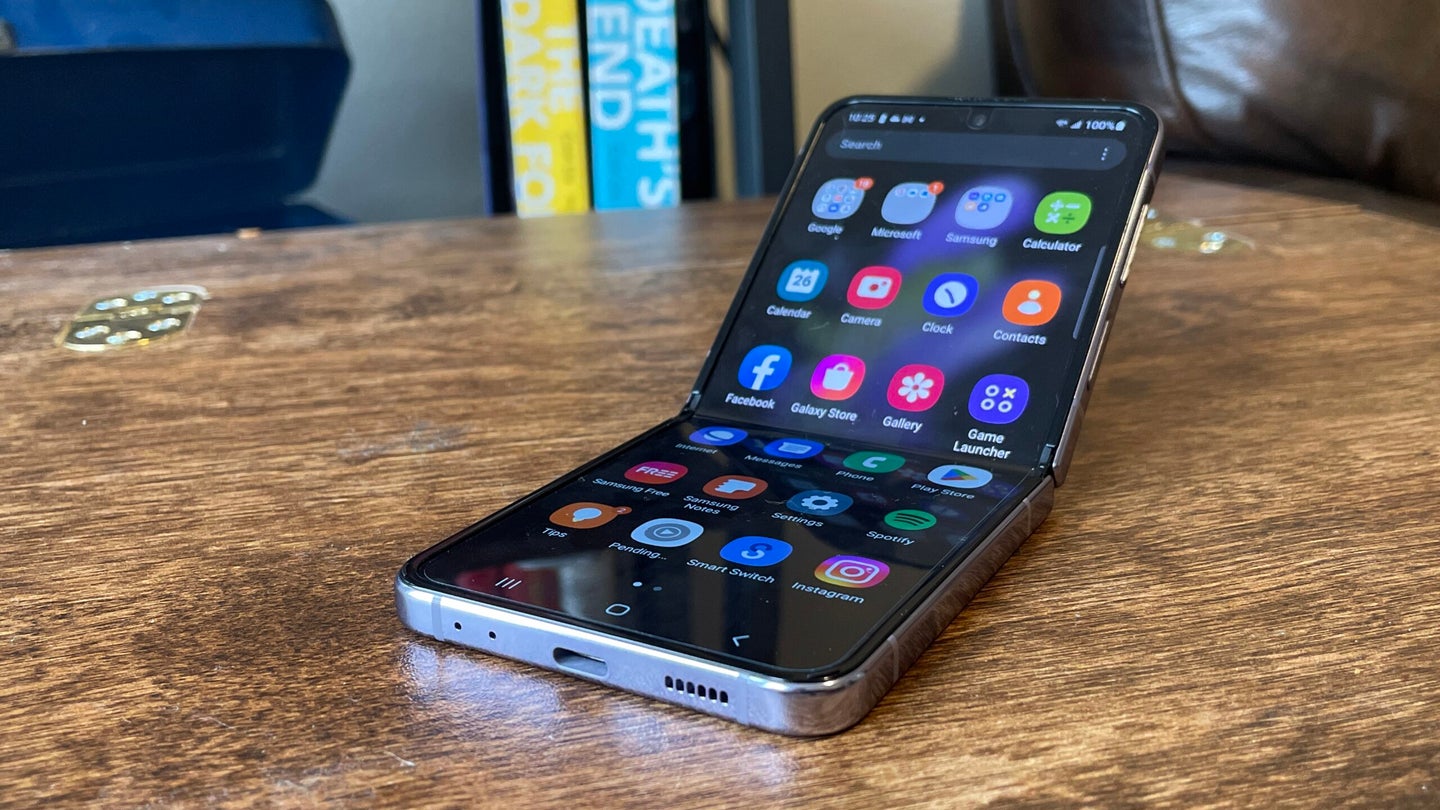 In its fourth iteration, the Samsung Galaxy Z Flip4 updates the most folding phone line in many ways. Mike Epstein
SHARE

According to Samsung and market research firm Omidia, the Samsung Galaxy Z Flip3 5G was the most popular phone with a foldable display in 2021. It’s easy to see why: The homage to the pre-smart flip phone, the Z Flip line is a perfect blend of inspiring, aspiring technology and something that evokes a time and experience many of us remember fondly. It’s new and familiar.

Samsung’s sequel, the Galaxy Z Flip4, is a new and improved version of that winning formula. It has a better processor and upgraded cameras. There are new ways to take advantage of the small cover screen that allows for quick actions when the phone is closed. Like its larger counterpart, the Samsung Z Fold4, it’s made with more durable materials and features a redesigned hinge. These are all good things, and they more-or-less justify the Flip4’s flagship-level price tag. Despite that, I couldn’t shake the nagging thought that the folding element of the Flip4 was largely unnecessary. It’s a capable phone, but the only real argument for it over a Galaxy S22, a new iPhone 13 Pro, or other top Android phone is a nostalgic longing for those neo-classical flip-phone vibes.

What is the Samsung Galaxy Z Flip4?

The Galaxy Z Flip4 is the more affordable of Samsung’s two-model “Galaxy Z” line of phones with foldable displays. The Z Flip4 folds vertically, recreating the flip-phone form factor that was popular just before the original iPhone ushered in the smartphone era. That means it’s a thick, but altogether compact 2.83 x 3.34 x 0.67 inches (WHD) when it’s in your pocket. It extends out to a lanky 2.83 x 6.50 0.27 inches (WHD) when you open it up to reveal its 6.7-inch 2640 x 1080 pixel Dynamic AMOLED 2X display. Despite the crease in the middle—an inevitability in folding phones at this point—the display looks bold and sharp, and scrolls smoothly at 120Hz.

The Fold4 is roughly the same size and shape as its predecessor but Samsung has made a few tweaks to its design, including Corning Gorilla Glass Victus+ for the cover display and a more durable aluminum frame. Samsung shaved off a little bezel, too, to augment the size of the screen. The biggest change—a slimmer hinge—delivers a smooth, but slow opening action. The Flip4 doesn’t actually “flip” open, which is probably for the best, but it does add a couple of long seconds to the process of opening the phone, which may be an annoyance if you want to quickly check an app.

To minimize this hassle, the Flip4 has a 1.9-inch 512 x 260p Super AMOLED cover screen, which you can set to always-on so it shows you the time and your battery status, allows you to check your notifications, and make some quick responses to texts. Effectively, it gives you the same level of quick engagement that you get from a high-end smartwatch. The external display is helpful in some situations but often doesn’t do quite enough to compensate for the added time of unflipping your phone. The screen is small, so you’ll have to bring it up to your face to see anything other than the time, at which point you may as well open up the phone.

The first thing I noticed about the phone, though, was its height. Opened up, it’s slightly narrower than the Samsung S22, and nearly ¾ of an inch taller. It’s nice when scrolling web pages and social apps because it displays so much content at once, but also means many streaming apps will scale down videos rather than stretch them to an ultra-wide format. That long, narrow shape also makes the phone feel a little unwieldy in your hand. I occasionally found myself sliding up and down the chassis like I’m playing a guitar solo when trying to tap icons near the top of the screen. It also doesn’t help that, at 6.6 ounces, it’s heavier than it looks.

Out of context, these are relatively minor problems that you can overlook as the price you pay for having a phone with a bendable display. Even though this is the fourth Galaxy Z Flip and folding displays are slowly becoming more common, chances are that this feels like new and spectacular technology for most people. It’s really cool to unfurl the phone and see that there’s a screen in there. It’s even cooler when you bend the phone and see the image bend with it.

However, taking a longer view, you don’t really get much out of the Flip’s brand of bending. It’s smaller in your pocket or bag, true, but thick and heavy enough when folded that I don’t see too many people taking that as an upgrade over the now standard 5- or 6-inch phone. It will fit in smaller jeans pockets, for example, but will also stretch them out. To me, at least, you’re taking on the compromises of a folding phone, including the weight, the crease in the screen, and potential susceptibility to mechanical issues, almost entirely for the spectacle of the fold and the aesthetic of the flip-phone form factor.

How the Samsung Galaxy Z Flip4’s design beats the Flip3

Setting aside the debate over the Z Flip line’s general utility, the Flip4 offers some very strong upgrades over the Z Flip3 5G. Under the hood, it features the newest Qualcomm chipset, the Snapdragon 8+ Gen 1, and, in benchmarking apps like Geekbench 5 and 3DMark’s Wild Life test for gaming performance, it bested the Samsung Galaxy S22 and kept pace with the larger Fold4, which has the same processor. Even with the same 8GB of RAM, you’ll notice the jump to a flagship-caliber chip when playing games or editing photos and video. That extra power also ensures a smooth transition between fully open and half-open “flex” mode, which enables a de facto dual-screen mode for some apps, including the camera.

The cameras have also gotten a glow up. You have the same basic camera setup—a 12MP wide lens and 12MP ultra-wide lens on the back, and 10MP hole-punch selfie cam on the inner screen—but the wide angle lens is brighter and has larger pixels, which allows it to capture more light. It also brings in a host of new AI processing features, such as Samsung’s low-light “nightography” and improved AI stabilization, which play an increasingly central role in determining how smartphone photos look.

The Flip4 still lacks a third tele-photo camera, though, so its camera stack ultimately falls short of what you’ll get on any of the Galaxy S22 phones or the Fold4. All things considered, though, my photos looked very sharp and detailed. It suffers a more acute version of the color oversaturation issues I found with the Fold4, though it’s a minor issue that only professional photographers and phone reviewers will actually see.

The biggest improvement to the camera, though, is for selfies. By tapping the power button twice, you can use the rear cameras to take selfie photos or video while the phone is closed, using the cover screen as a viewfinder. It’s a very convenient, but flawed way to take a photo: The cover screen doesn’t show you the full photo, so it can be tricky to get the perfect shot.

Like previous Z Flips, the Flip4 also gives you some fun options for shooting photos and video by using the camera app in Flex mode, which initiates a dual-screen layout where half the phone acts as the viewfinder and the other shows settings. This allows you to easily place the phone on a table to set up time-delayed shots, or angle the phone so you better see what you’re shooting. If you’re taking a video, you can hold the phone sideways like a camcorder, too, which is fun if you remember camcorders.

Given that Flex mode is the main technical benefit of making the Flip4 foldable, I wish it were more helpful. A decent number of popular apps support it, including the Google app suite, the Samsung app suite, Facebook, Instagram, and even some games like Diablo Immortal. In most cases, though, that usually means support for dual-app multitasking, where one app is on the top half of the screen and a second one is on the bottom. The Flip4’s multitasking feature is very helpful at times: The ability to clearly and easily splitscreen apps makes it easier to move information over from a webpage to a google doc or use the calculator while you’re writing something in the notes app. Still, I wish more apps supported bespoke layouts or modes like the camera, which really make the Fold feel like an asset when you’re using the phone.

Last, but not least, it’s worth noting that the Galaxy Z Flip4 has a moderately larger 3700mAh battery, versus the 3300mAh in the Z Flip3 5G. In my experience that will get you through a full day of intermittent use, but won’t last overnight. The good news is it also supports up to 25W fast charging, so it goes from dead to 50 percent in 30 minutes with a compatible charger.

So, who should buy the Samsung Galaxy Z Flip4?

With computing power that approaches that of a flagship phone, the Samsung Galaxy Z Flip4 is a strong high-end smartphone that is, ironically, held back by its signature feature. The feel of flipping it doesn’t feel quite right to me, which matters if I’m trying to conjure the memory of misspent youth. More importantly, I don’t really need a shorter phone to fit in my pocket. I only see the tradeoffs when I use the Flip4, not the nostalgia or the magic of the folding display. I accept and, honestly, encourage people who see things in a different light to go play with one in a store.

If you try it out and fall in love, Samsung has made some big strides in Flip4, meeting or beating what you get from the S22 series in many respects. With that kind of power under the hood, its $999.99 starting price tag doesn’t feel like an insurmountable early adopter tax, which remains a disqualifying issue for the Galaxy Fold4. It isn’t without its problems: The cover screen needs to be more useful. The rear cameras are not as powerful or well-equipped as the rest of the Samsung phone Galaxy. The hinge and inner screen’s inherent sensitivity to dust makes it more fragile than the average phone. (And, personally, I would like to see Samsung pay some app developers to experiment with unique Flex mode integrations.) Still, the novelty of a folding screen and owning a flip phone in 2022 may blend to create just the right shade of rose-colored glasses and let you feel nothing but love for the Samsung Galaxy Z Flip4.