You can use and abuse the Shure SM7B dynamic mic for vocals, instruments, or both. 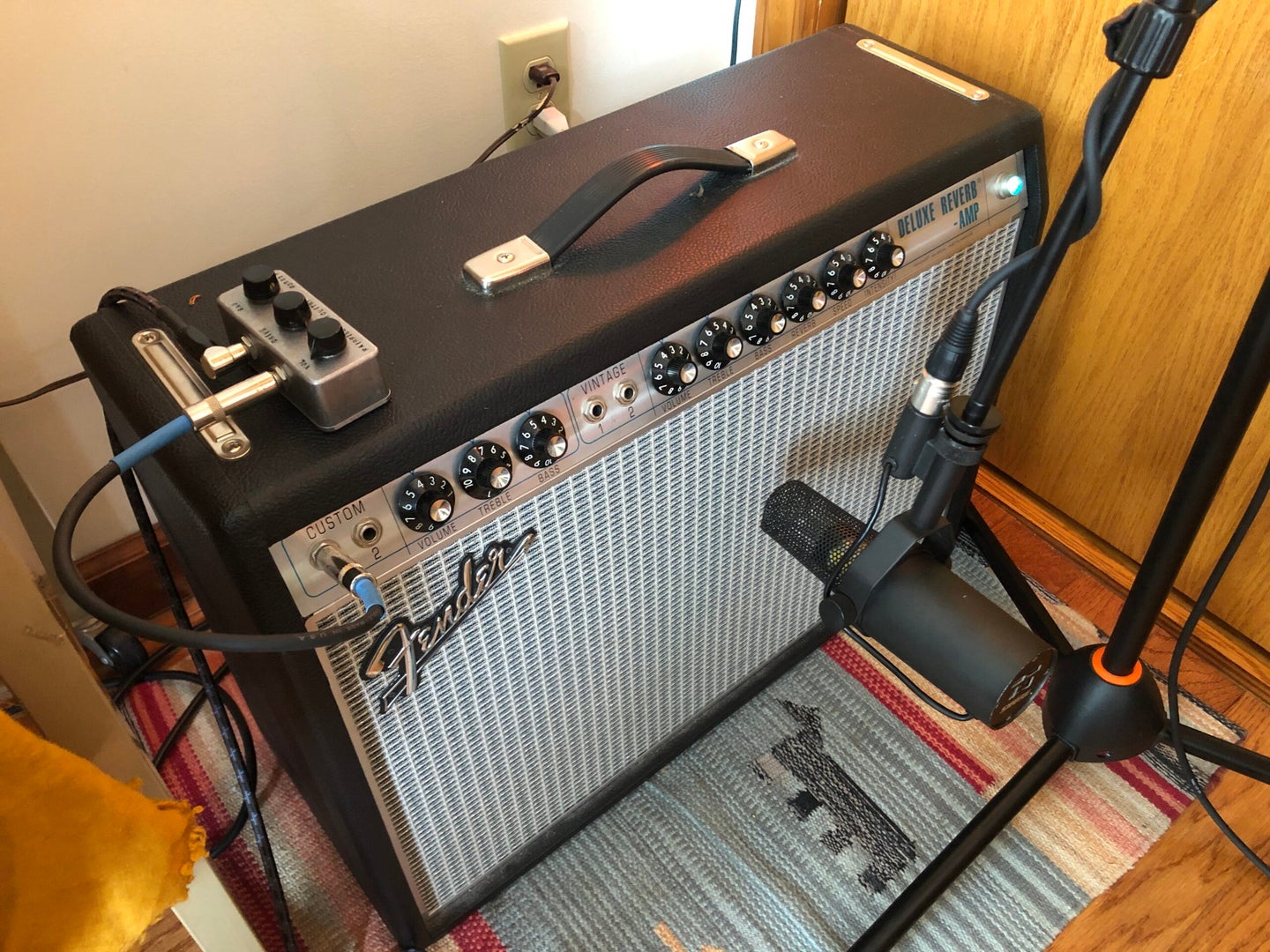 The Shure SM7B is a legendary dynamic moving-coil microphone that’s ideal for close-proximity instrumental and vocal use in recording and broadcast studios. The product of several decades of acoustic development and research, this Shure microphone delivers a flat, smooth frequency response packed into a durable casing. Between its dynamic range and smooth, extended frequency response, the SM7B delivers a polished and professional sound in almost any room—why it’s so well-known in the broadcasting world.

The $399 SM7B shares a design lineage with the venerable Shure SM57—engineers in 1973 were given the SM57’s cartridge and told to make it better and the result was the original SM7. Like its predecessors, the SM7B (released in 2001) excels at versatility and predictability in critical audio applications, which has made it somewhat of a gold standard. Whether you’re building a pro studio mic collection or just looking for a single microphone to use for streaming, podcasting, and voiceover use, the pure staying power of the Shure SM7B should earn it a spot near the top of your list.

Visually, the Shure SM7B is hard to miss, sporting a sizable enamel aluminum and steel housing and an equally distinct dark gray windscreen. An efficient design, the microphone hangs from an integrated yoke complete with a three-pin XLR jack and a threaded nut for stand mounting. On the rear of the microphone are some unique sound customization controls, with a visual representation of the frequency spectrum and two switches for toggling between low-frequency roll-off, mid-frequency boost, and fully flat response.

The feel of this mic in the hand is rather dense; it does not feel fragile or lopsided. Weighing in on the heavier side at just over 1.5 pounds and measuring 7 inches in circumference, the SM7B requires a microphone stand with a decent counterweight for proper support and isn’t built for handheld use. While its integrated threaded nut makes stand mounting a breeze—and it’s nice not to have to keep track of a separate mount or clip—I found that it’s easy to overtighten the nut, which makes it a minor struggle to detach the mic from a stand.

The Shure SM7B’s clear design, inside and out, is to deliver honest, clean, and consistent audio reproduction. The casing features extensive shielding from electromagnetic hum and an air-suspension shock mount and vibration isolator within the housing keep the capsule acoustically isolated to resist noise from almost every type of motion. The rather large housing itself provides extra internal space below the capsule that allows for an extended low-frequency response. Underneath the windscreen, a spacious and rigid metal grille protects the capsule from bumps and impacts and, in close-talk applications, the windscreen can easily be swapped for an included thicker version to provide extra isolation from air.

The SM7B’s durability in real-world scenarios cannot be overstated. I’ve been using mine consistently for over a decade and its thick housing and rugged capsule cage have held up to countless drops and accidents without any effect on the microphone’s sound or functionality. Besides some scratched enamel or a dent here and there, my SM7B (the one shown in the pictures on this page) performs exactly the way it did on the day I bought it. This working longevity is impressive in its own right, but it’s also a distinct feat that few other microphones on the market could pull off.

Getting started with the Shure SM7B

The Shure SM7B interfaces with audio equipment using any industry-standard XLR cable. Compared with many microphones, this microphone requires an above-average amount of clean gain to deliver a usable audio signal, so if you’re running this mic with underpowered preamps and find that the signal is too quiet or noisy, a phantom-powered gain booster like the Cloudlifter CL-1 is the perfect match for getting the best sound out of the SM7B.

As mentioned earlier, this mic is designed strictly for use on a microphone stand. Even if one were to attempt handheld use of the SM7B, the placement of its integrated XLR output makes for significant movement of the cable during handheld use and can result in lots of popping and electrical noise. Overall setup time for this microphone is incredibly fast thanks to the integrated design of both the XLR output and the captured threaded nut. It requires less time than it takes to boot up a computer and load recording software.

The Shure SM7B is all about accuracy and consistency, which it delivers in spades. The frequency response this mic captures spans the entire audible spectrum from 20 Hz up to 20,000 Hz, with a slight scoop in the low-mids and gentle shaping on the top end, which makes it a good all-around choice for most musical and vocal sources. It can also withstand a maximum sound pressure level over a blistering 180 decibels, so it’s an ideal choice for placing in front of the loudest guitar amps and on the kits of heavy-hitting drummers.

One of the reasons the Shure SM7B is one of the best microphones for vocals is the two EQ switches on the rear, which allow for further shaping the microphone’s sound. The low-cut switch creates a roll-off beginning at 400 Hz, and the mid-boost switch offers a lifted response from 900 Hz up to 11,000 Hz, both of which can clean up rumble and boominess from more resonant vocal sources. These shaping options offer flexibility when experimenting with different sources. However, they permanently alter the source’s raw recorded sound so use with care.

Two varieties of robust integrated windscreens are another key ingredient of the SM7B’s consistency and flexibility. Their dense foam blocks the capsule from plosives and other user-created air bursts that could otherwise ruin a good vocal recording (or podcast discussion, etc.). They’re also removable, which is a great route to take when recording instruments like guitar and drums where air isn’t a concern and where a direct route between the source and the capsule is desired.

The Shure and steady sound

The Shure SM7B has a reputation for being incredibly versatile, so I didn’t hesitate to put it through its paces. Using the onboard preamp on my Universal Audio Apollo interface, I tested the mic on voice, guitar amp, bass amp, kick drum, snare drum, and acoustic guitar, testing both its default EQ response and its low-cut/mid-boost options. When taking into consideration the samples from every source, I’d describe the sound of the SM7B overall as smooth and dark, especially when compared to the crispy and relatively snappy response of the average condenser mic. Unlike condenser microphones, which use extremely thin and sensitive membranes to respond to sounds, the SM7B is a dynamic design that relies on a relatively beefy moving coil, which is more durable and less sensitive. It has a cardioid, or heart-shaped pickup pattern, which means that it’s sensitive to sound from only one direction, in this case directly in front of the capsule. This makes it great at rejecting ambient noise from the room while focusing on the recorded source with precision.

On voice, the SM7B is warm without being muddy and has a smooth top-end response with nary a trace of harshness. Interestingly, after engaging the EQ switches, I found that the sound of vocals changed the most subtly of all sources tested. The full, gently shaped frequency response of the SM7B and its high level of room-noise rejection render a clean production-ready vocal sound that makes it easy to see why this mic has been embraced by podcasters and content creators. This mic almost “sounds” durable in a speech or broadcast setting; its extremely high headroom offers lots of flexibility and dynamic performances without a trace of distortion.

On kick and snare drums, the SM7B delivers a punchy sound with a relatively fast decay and smooth transient response that never felt overbearing. I preferred the natural sound of the mic without any EQ changes on drums, which makes sense since the low-cut switch eliminates a lot of the frequencies where drums’ fundamental tones reside.

Guitar and bass amps sounded detailed and full when recorded with the SM7B, particularly with the mid-boost engaged. This result was expected, since the SM7B is essentially an enhanced version of the de-facto industry-standard guitar amp mic the SM57; however, the drastically extended low-frequency response of the SM7B made it work wonders on a bass amp. Of all the sources, I enjoyed acoustic guitar the least through the SM7B. The sound had a pleasing lack of brittleness on the high end, but I found the transient response too slow and lacking in detail for such a delicate and complex source. Still, this is more of a comment than a condemnation, since some styles of music may call for an unconventionally smooth and out-of-the-way acoustic guitar sound.

So, who should buy the Shure SM7B dynamic microphone?

For the money, I can’t think of a better studio microphone deal than the Shure SM7B. Whether you’re an actively working audio professional or you’re just beginning your audio production journey, the durability and versatility of this mic have earned it a well-deserved reputation for consistency and reliability that anyone can benefit from. Users who prefer USB connectivity to a compact digital setup or who want to stick to less forceful voice applications might consider the $249 Shure MV7 microphone, which is visually similar to the SM7B and packs a tailored vocal sound that’s great for content creation.

But if you’re got the budget, the relatively flat sound of the SM7B makes it a great all-rounder and a stunning vocal microphone. Just bear in mind that the transient response isn’t as snappy as a condenser, which means this Shure mic might fall flat on extremely detailed sources. Its neutral sound also means it can’t provide some of the more “hyped” or enhanced frequency responses of microphones specifically tailored to certain sources, such as the Shure Beta 52A kick drum mic. There’s always a trade-off to be made between versatility and niche appeal, but if you’re just starting out and want one of if not the best dynamic microphones, the SM7B is an absolute bang-for-your-buck no-brainer.