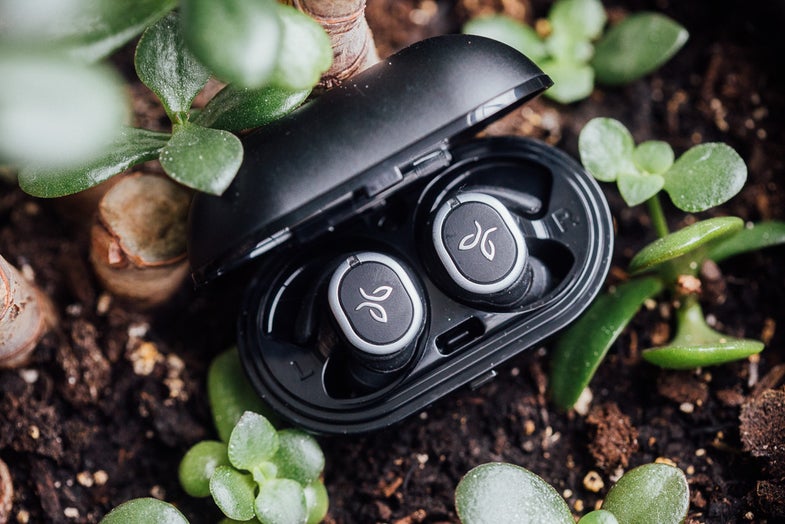 It’s a relatively crowded night at my gym and I’m covered in sweat, shaking my head like a madman in the corner. It’s conspicuous and not very attractive, but that’s my M.O. at the gym most days anyway, and I had to find out just how hard it is to dislodge the Jaybird Run wireless headphones from my ears. They didn’t budge—and no one called gym security—which gave me plenty of time to discover a lot of things I like about Jaybird’s first pair of workout-inspired, true wireless earbuds.

An introduction to the Jaybird Run wireless earbuds

Most of Jaybird’s popular wireless headphones are tethered together with a cable, but these new earbuds operate totally independently from each other, like the Apple AirPods or the Bose SoundSport. The Jaybird Run wireless earbuds are sealed to keep sweat out and use an integrated rubber ear hook to keep them locked in place as you flop onto the ground to do burpees.

Look around for reviews of these sport earbuds and you’ll find a surprising disparity between great and atrocious. This stems from a troubled start. The first pair of Jaybird Run earbuds I got (a pre-production model, according to the company) had connection issues so frustrating I considered putting them in my mouth and chewing them up out of anger. Eventually, the company sent me a second set and, thankfully, the wireless connection was worlds better.

When connecting them for the first time to a phone (I tried them with several phones, including the Google Pixel 2 and my everyday carry iPhone 8 Plus) it never took more than 30 seconds between removing them from the charging case and listening to tunes. Once the connection was locked it was very solid—for the most part. Occasionally, the left headphone drops out of sync and interrupts the music. That happened to me once every two workouts or so, and never for more than a few seconds.

However, like other reviewers, I did notice some trouble specifically when walking around the streets of NYC. This isn’t out of the ordinary, as there is a lot of wireless interference bouncing around the urban canyons of New York, but if you typically run in an urban environment, make sure to test the connection as soon as you can. Some spots, like the northeast corner of Herald Square, proved really problematic.

Outside NYC, however, I’ve had very few drops over the course of several weeks.

The Bluetooth headphones/earbuds come in a pill-shaped charging case that powers up via typical microUSB port. That’s a refreshing change from Jaybird’s typical method, which involves a proprietary charger that’s easy to lose and annoying to replace.

The Jaybird Run promises four hours of battery life and I found that to be the case, at least when sitting at my desk. I don’t typically work out for four hours at a time, so that metric didn’t really matter to me. The case holds an extra eight hours of battery, which is a benefit of its size. One thing I found particularly impressive was how fast the case is able to charge the buds. I put dead wireless earbuds in the charging case before the ten-minute drive to the gym and had plenty of juice to get all the way through my workout.

As a person who loses stuff and moves in a jerky fashion perfect for flinging out earbuds, the idea of truly wireless Bluetooth earbuds still worries me a little. Since they cost $180 a pair, watching one fly out into a sewer grate or onto the subway tracks is a nightmare waiting to happen. The Jaybird Run earbuds, however, fit really well. That’s not to say they will fit everyone, but they locked into my large ears and stayed there through heavy lifts, hard sprints, and the dry heaving that came after the sprints.

They come with an assortment of tips with different sized rubber hooks to keep them in place. The longest I wore them was two consecutive hours and they were still comfortable at the end.

The buttons on the sides of the wireless headphones to do things like pause music or even turn them on and off are sturdy, which means you will probably never activate them by accident, but also that you’ll have to mash them into your ears to get them to register your press.

Bluetooth wireless earbuds aren’t known for the best sound quality and these didn’t exactly turn the world upside down or reveal nuances in songs I’ve heard a thousand times. The quality is solid. The highs sound a little crunchy and there’s a very slight hiss when no sound is happening. The bass is surprisingly good, even though I wish they got a little louder to cover the sound of my own breathing during a hard run.

Should you buy the Jaybird Run earbuds?

I’ve seen several comparisons to the Apple AirPods, but these feel so different to me from an experience standpoint that it doesn’t seem like a good point of reference. These stay in much more securely than the AirPods, and the button-based user interface on the Jaybirds is much more straightforward, which you will either appreciate for its simplicity or scoff at for its inelegance.

You can, however, compare them to options like the JBL Free True and the Jabra Elite Sport, both of which are roughly $30 cheaper and provide similar functionality. I do find these to have a better fit than both of those options, however, and the tweakable sound options in the Jaybirds helps them stand out as well.

The Bose SoundSport headphones have the Jaybirds beat when it comes to pure sound quality, but I don’t like the form factor as much and at $250, they’re $70 more expensive than the $180 Jaybirds.

Overall, I’m glad the Run was able to iron out the initial issues with connectivity and ultimately, these are a solid option for runners who want headphones that won’t fly out, even if you shake your head like a wild man in the corner of the gym.