Underneath the hype, the Samsung Galaxy Z Fold 2 is a clever multitasking machine that's fun to use. 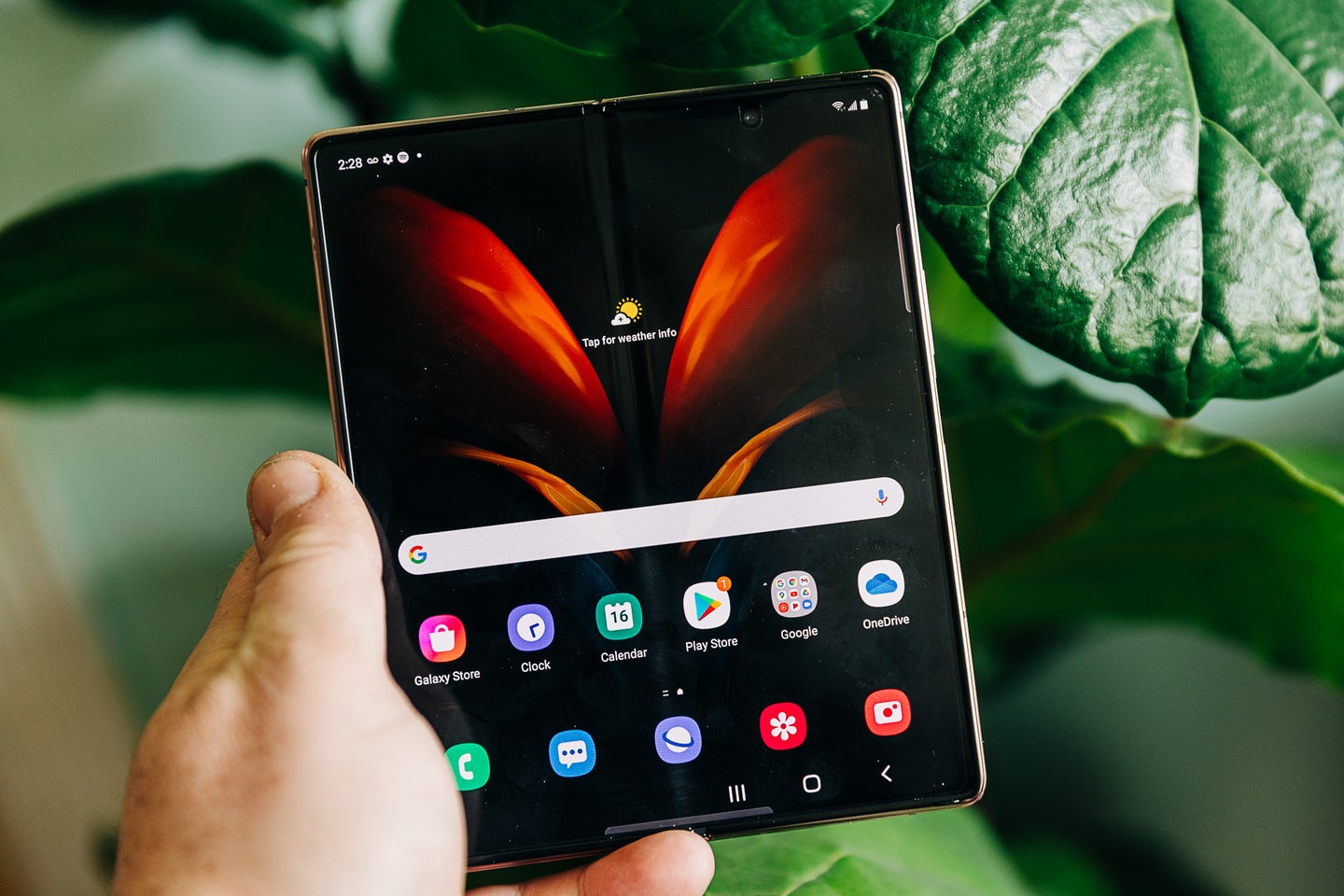 That screen really is spacious when it's open. Stan Horaczek
SHARE

For the terminally online, gadget-obsessed among us, folding phones aren’t an entirely novel concept anymore. The recent months I’ve spent with the Samsung Galaxy Z Fold 2 have reminded me, however, that these flapping devices still occupy a specific space in the overall smartphone world. No fewer than three people asked to check it out during my 90-minute wait at the tire shop. No one is impressed with the iPhone 12 Pro max I also carry around.

Now the Galaxy Z Fold 2 has been on the market for roughly 10 months and we’re presumably inching toward the introduction of its successor. That also means that we’ve had some time to really experience what life with a folding phone is like. In short, it’s kinda great. And it feels like there’s a ton of potential.

What is the Samsung Galaxy Z Fold 2?

The Galaxy Z Fold 2 occupies the top spot as the flagship in Samsung’s folding phone offerings. It sits above the smaller Z Flip series. When it’s closed, the Z Flip 2 offers a 6.2-inch screen, which sounds normal enough, but it has a very tall 25:9 aspect ratio. It can handle all of your normal smartphone tasks from checking notifications, texting, and even browsing through apps if you don’t mind peering into the internet through a tall-skinny window.

Flip open the main screen on this phone-tablet hybrid and the Galaxy Z Fold 2 presents a 7.2-inch display with a decidedly squared-off aspect ratio (it’s 22.5:18 if you’re looking for the official numbers). That interior screen isn’t just bigger—it also introduces a 120 Hz refresh rate feature that makes scrolling much smoother and more responsive.

The computing guts put up impressive numbers, too. A Snapdragon 865 Plus processor sits at its heart. The device also comes packing 12 GB RAM and 256 GB super-fast storage. Samsung built this to show off top-tier tech and it didn’t skimp. That contributes to the expensive $1,799 price tag, but the device wouldn’t make sense if it wasn’t screaming fast.

As the burly spec sheet suggests, the Samsung Galaxy Z Fold 2 can handle anything you’d expect a flagship smartphone to do and more. Because the screen is built for possible multitasking, it comes toting ample RAM.

With the screen folded open in tablet mode, it has no problem running a browser window next to my email. I ran high-end games, HD streaming services, video calls, and everything else on the device and it didn’t hiccup. That’s as it should be.

With the device flipped open, you’ll find yourself staring at a 7.6-inch display. It’s bright and its 2,208 x 1,768 resolution is plenty to make everything look sharp and detailed. And, because the device has all that power under the hood, the operating system moves quickly and smoothly, even when there’s a lot happening on the screen.

The squarish form factor takes some getting used to. When you’re multitasking, it makes sense. Two tall, skinny windows next to each other work just fine. When you’re looking at one app, however, it can get slightly weird. You may end up looking at Instagram in a letterboxed window with a ton of wasted space on the sides. The square format is also slightly weird for watching content. A full-screen YouTube video on the 7.6-inch screen only appears slightly bigger than it does on the 6.7-inch iPhone 12 Pro Max display. Put the video at the top of the display, however, and you still have plenty of room underneath to do other tasks. It took a little time for me to really internalize how Samsung intends people to use that extra screen space for multitasking instead of simply making content bigger.

The external screen received a huge upgrade from the first Galaxy Z Fold. The 6.2-inch screen is tall and skinny, but it’s bright and high-res. At 2,260 x 816, it very nearly matches the pixel density you’ll get on the inside display. The outer screen only refreshes at 60 Hz instead of the smooth 120 Hz you’ll find on the 7.6-inch display. And that tall, skinny form-factor really isn’t ideal for extended use. But, it’s usable, especially if you’re precise about your typing.

What about the hinge and screen durability?

The very first Galaxy Z Fold had some durability issues with the screen and hinge, but the Samsung Galaxy Z Fold 2 is a much different beast. Samsung mobile added more cams to the hinge, as well as a built-in brush that redirects crud from the mechanism before it can get in and do any damage.

I’ve been folding and unfolding the phone for months now and it still feels right enough to be secure but not so tight that it’s annoying to open. It also doesn’t creak or crunch as it moves, which is more than I can say for my own body at this point.

As for the main screen, it now includes a layer of ultra-thin, flexible glass as part of its substrate sandwich. The surface you tap on is still plastic. It’s a screen protector that’s meant to take abuse from coins in your pocket or uncut fingernails as you tap vigorously on your favorite Android game.

The main screen has certainly picked up some nicks and scratches over time, but it definitely hasn’t failed and it still looks excellent. The outer coating does pick up more fingerprints than a typical smartphone screen, so I’ve gotten accustomed to regularly wiping it off before it gets too gnarly.

I don’t really notice the seam down the middle of the main screen anymore unless light hits it from a steep angle. It has gotten more pronounced over time, but it’s still totally fine. I thought it would stick out to my eyes a lot more than it ever actually did. Typically, if I notice the indentation, I can slightly change the screen’s orientation and that’s enough to make the hinge nearly disappear.

Most smartphones are pretty self-explanatory. Things change as operating systems update, but they work in relatively similar systems. The Samsung Galaxy Z Fold 2 has a bit of a learning curve. I spent my first few days with the device using it as a transforming version of a typical smartphone. I used one app at a time and it felt awkward. Multitasking is essential if you’re going to make the most out of the device.

Samsung’s custom dock is extremely handy. It sits along the side of the screen and allows you to drag apps (via their icons) to different parts of the display. You can also set up handy software shortcuts such as saving app pairs that you can open together. Once you get into this kind of customization, the whole device makes a lot more sense from a usability standpoint. Going back to a single screen takes a little bit of an adjustment when you’re used to flinging all your stuff all over a huge display.

The system isn’t perfect yet, however. Sometimes things won’t show up where you expect them to. Or, if you have an awkward layout, you may run into some very clunky situations. I accidentally put my picture-in-picture YouTube window in front of my search results, for instance, which took a moment to process before I realized why I couldn’t see what I was looking for.

While it’s easy to hold the phone flat most of the time, I found myself slightly bending the phone like a paperback book just because it made it feel slightly more balanced. It didn’t affect the viewing angle of the screen nearly as much as you might think.

The sturdy hinge allows for the device to sit partially open on a table like a tiny little touchscreen laptop. While I’m glad the phone can do this because it seems like it could be useful down the road, I didn’t find myself taking advantage of it very much—or at all, rally—during my time with it.

Snoop around the Galaxy Z Fold 2 and you’ll find a total of five different cameras strewn about the device. Each display has its own 10-megapixel selfie camera peeking through a small hole near the top of the device. The main camera array on the back has a trio of 12-megapixel cameras differentiated by their lenses. You’ll find an ultra-wide, a standard wide-angle, and a telephoto.

I won’t dive too deeply into the cameras here because they don’t really do much to stand out from what you’d expect. The main cameras provide solid—if a little over-saturated—colors and even exposures. The lenses are sharp and the images are relatively detailed. They look like pictures and videos that come from a high-end (though not flagship) Samsung smartphone. You can say the same about the selfie cameras as well.

If you’re looking for truly top-end image quality, you’d be better off spending your cash on something like the Galaxy S21 Ultra, which seriously ups the ante when it comes to camera features like optical zoom.

Who should buy the Samsung Galaxy Z Fold 2?

At $1,799, the Samsung Galaxy Z Fold 2 was actually somehow cheaper than the first-generation device. Still, it’s a luxury item aimed at business types with corporate cash and the need for maximum multitasking, or early adopters who want the coolest new device regardless of its practicality.

With some distance from the initial hype, however, the Galaxy Z Fold 2 has had a chance to prove itself as a viable product with real-world utility. From a productivity standpoint, it really is hard to beat its ability to handle several tasks at once. And while the first Z Fold’s screen felt like a liability, I don’t have an issue trusting the design on the Z Fold 2. I’m not particularly gentle on phones and this one has survived without issue.

The device still lacks a few features that would make it even more usable. The current generation isn’t compatible with Samsung’s S Pen stylus. All that screen real estate bags for handwriting and drawing features like you’ll get with the Galaxy Note S21. Perhaps in the next version. The software still has some bugs to work out as well. As foldable screens get more and more support, I expect things to get even smoother than they are now.

If you do take the leap into the Galaxy Z Fold 2, you’ll probably like it a lot, even once its novelty wears off. It might even get you hooked on all that room to multitask. Email on one screen seems so boring now without YouTube to spruce it up.