If sound discounts are music to your ears, these early Black Friday audio deals hit the high notes by offering low prices. 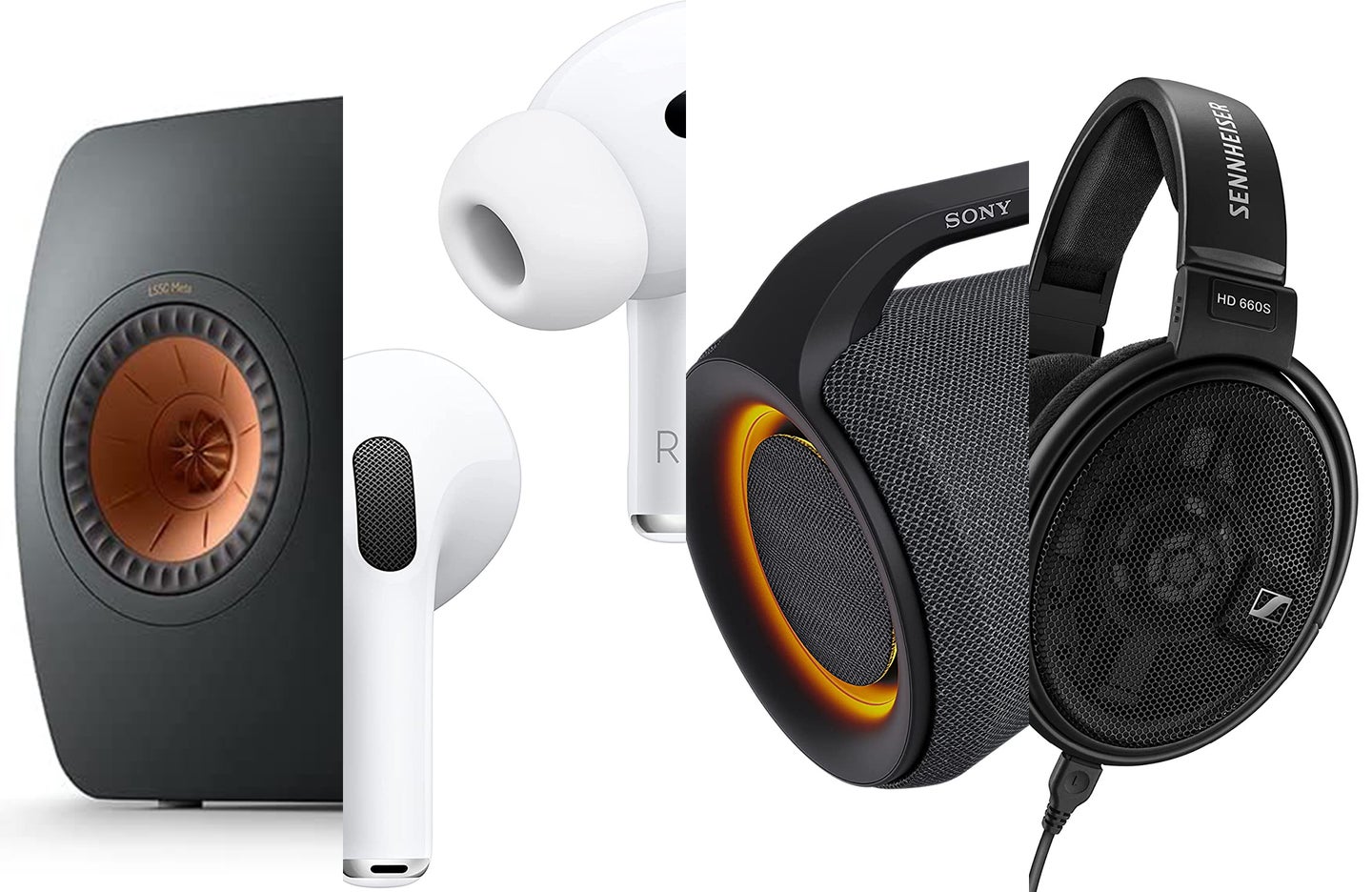 It’s November, nearly Thanksgiving, and many of our thoughts are already putting an emphasis on the giving. Luckily, it’s the time of year that the temperature creeps down and we give thanks that retail prices do the same. And if you’re specifically looking for savings on headphones, earbuds, or speakers, we’re on the same wavelength. Now, as Depeche Mode eloquently put it in 1986, “Let’s have a black celebration.” But when it comes to Black Friday … or Cyber Monday … you no longer have to save the date to get something great. We’re already seeing some deep discounts on premium products, especially in the audio arena—the kind of deals that will have you dancing to “As It Was” by Harry Styles on repeat in no time. So, if you want to gift someone—yourself included—a leveled-up listening experience that’s not the same as it was, as it was, here we go with the best early Black Friday audio deals we’ve heard of so far:

The AirPods Pro 2 have better active noise cancellation, up to six hours of playtime per charge, and come with a battery case that can fully recharge them five times. Apple has adjusted the way these earbuds sound to improve their audio quality overall and bass performance specifically. It’s also included a new pair of XS-sized eartips in the box so that the earbuds can fit more ears comfortably. Improvements to Spatial Audio—including using pictures of your ears to personalize the tuning—will make audio mixed in Dolby Atmos sound more 3D. Apple hasn’t changed the look or size of its pro-level earbuds, but it has made significant changes to their case. The new AirPods Pro 2 case has a speaker, which will play a chime if you ping them using Apple’s “Find My” feature, so the earbuds are easier to locate. The case also has a lanyard loop in case you’d like to carry the AirPods Pro 2 around with you. These little tweaks add up, and we can easily say these earbuds are better than any of Apple’s other options. They also stack up well compared to sub-$200 earbuds from companies like Bowers & Wilkins, Bang & Olufsen, Jabra, or Soundcore.

Looking for something iOS but a little less spendy? The standard but still feature-packed Apple AirPods (3rd Generation) earbuds are $159, down from $169.

While they may be last-gen., the Sony WH-1000XM4 ANC headphones are far from egregiously outdated. Sensor- and software-stuffed, 2020’s ANC headphones of the year still stand out for making sure your environment doesn’t creep in. Sure, the newer WH-1000XM5 (which is reduced slightly to $348) is even more efficient at filtering out rumble and buzz, but not to an exponential amount. And, sonically, the WH-1000XM4’s 40mm drivers and a frequency response of 20Hz to 20,000kHz (over Bluetooth, or 4Hz to 40,000kHz when using the cable), put the fun in functional. There have been a lot of premium ANC Bluetooth headphones released in 2022 (from Sennheiser, Bowers & Wilkins, Master & Dynamic, Focal, etc.), but if you’re not looking to spend $350 or more you’ll be more than satisfied with the WH-1000XM4’s ability to produce a bubble of portable productivity.

Looking for something more stationary yet unconstrained? We love the synergy of the HiFiMan HE-R9 closed-back dynamic headphones and HiFiMan EF400 R2R DAC/amp. The HE-R9 ($249 down from $369) is a lightweight heavyweight, an extremely comfortable bass beast of a headphone that doesn’t sacrifice overall clarity for engagement. And the compact desktop EF400 ($499, down from $599) makes sure the ‘cans can—delivering a high-octane signal that’s punchy without being paunchy. They’re a perfect pair, or just pick up the DAC/amp solo to add a muscular high-resolution response to any of the top-tier audiophile and production icons by Sennheiser and beyerdynamic below.

Need a way to feed advanced-resolution audio to all your new gear—at home and on the go? The flagship FiiO M17 digital audio player is $200 off, down to $1,599 from its regular price of $1,799. Running flawlessly off a customized Android 10 OS, it decodes every format, supports all streaming apps, offers every manner of wired and wireless connection you can imagine—2.5mm/3.5mm/4.4mm/6.3mm outputs and Bluetooth 5.0 with AAC/aptX Adaptive/LDAC—plus has enough power to potentially replace a desktop set-up, even for hard-to-drive flagship headphones.

Looking for Early Black Friday audio deals that fit in your pocket—the same pocket that’s full of all that sweet cash you’re saving? Check out these discounted earbuds we’ve found:

The Ultimate Ears Wonderboom 3 Waterproof Bluetooth Speaker is our top pick for shower speaker because it’s buoyant in more ways than one. The 360-degree sound—from two 40mm active drivers and two passive radiators, which produce a frequency range of 75Hz – 20kHz—is surprisingly powerful for such as ultra-portable orb. Plus it’s IP67 waterproof and it floats, so it’s ready for everything from bath time to whitewater rafting. We’ve declared the Wonderboom 3 our best budget speaker at $99, so it’s an insanely good deal at $69.

Tired of singing solo in the shower and ready to party with pals? The Sony SRS-XG300 Portable Bluetooth Speaker is an IP67 waterproof and dustproof cylinder with pulsing LED rings at its ends and a 25-hour battery to power its dual front-facing tweeters, X-Balanced woofers, and passive radiators, which bring more bounce to the ounce. It’s not the cheapest party speaker at $248 (usually $349.99) but it might be the classiest and sassiest—one of our favorite combos. Easy to transport but still sleek, thanks to its retractable handle, the SRS-XG300 sounds as good as it looks if you like high-quality rumble (what else is a party speaker for, anyway). While they might complain about slightly recessed mids, Android users with compatible hardware can even get an audiophile-level connection thanks to Bluetooth 5.2 LDAC support (plus there are MEGA BASS on/off and rudimentary EQ options in the app). The end result is a crisp presentation with plenty of distortion-free kick—and you can even get more thump if you go with the SRS-XG500 below.

Like the sound of even bigger bargains? Trusted budget brand Tribit has dozens and dozens of earbuds, headphones, and speakers available on sale for between 15 and 50 percent off. The sale includes another one of our favorite portable waterproof speakers, the StormBox 2.

We’ve got no problems with cords over here, but we do love to get wrapped up in the latest wireless developments. Some of the most impressive advances have been in wireless surround sound systems, and the Nakamichi Shockwafe family has been one of our top picks even before systems like the 9.2.4-channel Shockwafe Ultra were offered at the currently unbeatable price of $400 off. Using proprietary digital signal processing to sync the wireless subwoofers and surround speakers, the Shockwafe lets you enjoy the immersion of Dolby Atmos with so much less of the hassle of a traditional surround sound system. Want to take it to the next level? Go for the Shockwafe Ultra eARC SSE MAX with upgraded driver materials, amplification, and connections, currently at an all-time low of $1,477 (usually $1,899).

Need a streaming source? The Apple TV 4K (2021) may not be the latest model, but it’s still an incredible deal at $99 (usually $179) and a great way to watch your favorite shows and movies, plus feed high-resolution audio from Apple Music or TIDAL to that new soundbar.

Prefer a stereo soundstage with pinpoint imaging? The KEF LS50 Meta are our best overall pick for bookshelf speakers and are available right now for $1,299/pair (usually $1,599). Fed clean power and evocative audio, the Uni-Q drivers in these speakers are engaging without exaggeration, offering a wide sweet spot and smooth, natural response. And there are early Black Friday audio bargains up and down KEF’s compact cabinet lineup, from the uncompressed expression of the entry-level KEF Q350 ($499.98, usually $749.99) to the three-way standmount KEF R3 ($1,699.98, usually $2,199.99).

Early Black Friday audio prices are correct at time of publication and are subject to change.