Turtle Beach’s first controller has headsets on the brain. 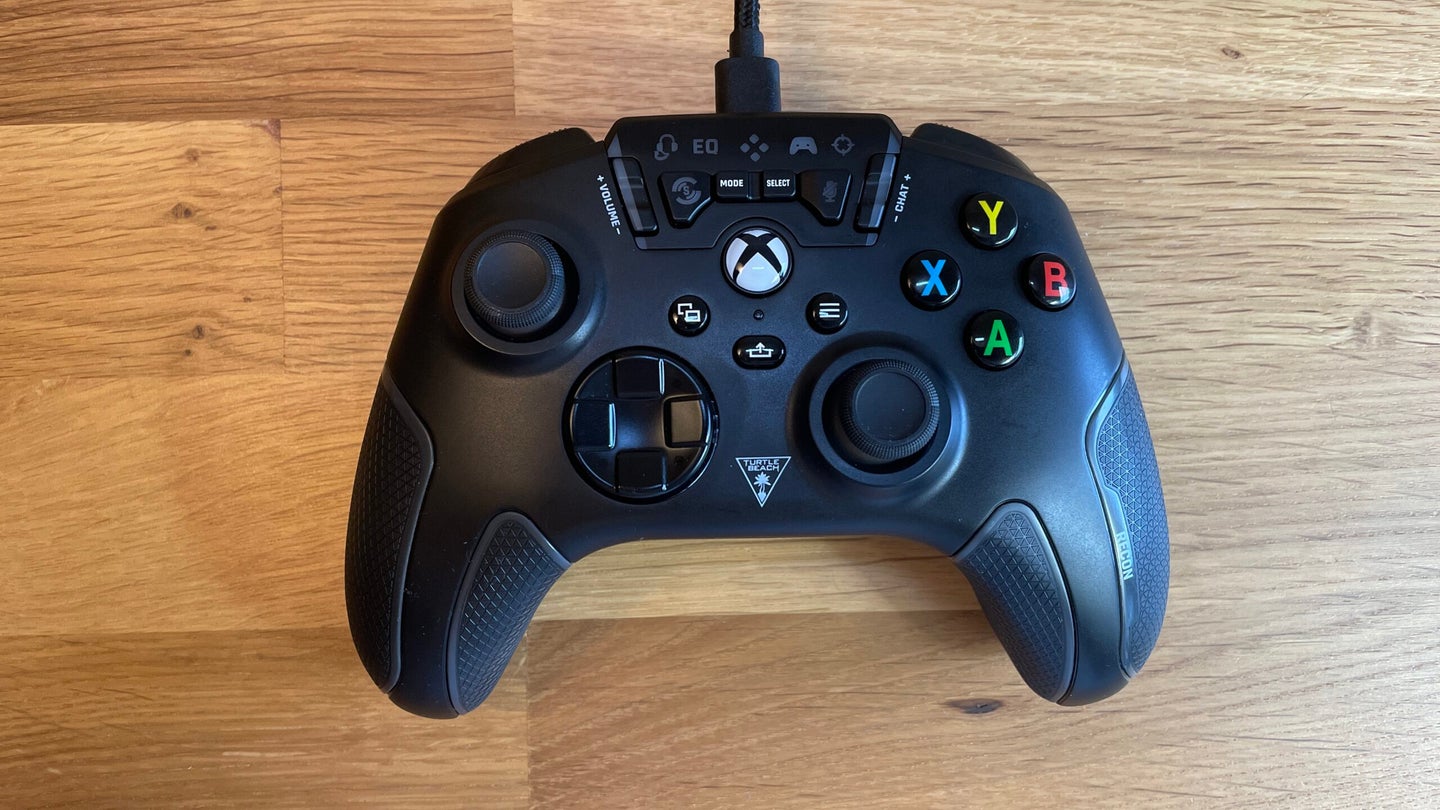 The Turtle Beach Recon controller, not to be confused with the Recon line of gaming headsets, is the company's first gamepad. Mike Epstein
SHARE

Turtle Beach, a very popular maker of console gaming headsets, has branched out into gamepads. Their Turtle Beach Recon controller – named, confusingly, after one of the company’s top headset lines – embodies a lot of the qualities I associate with the brand: It’s durable, but not as well made as Microsoft’s own controller. It’s a bit gimmicky, but the extras aren’t just for show and might appeal to a multiplayer fan. At $60, it’s neither budget nor high-end. It’s also wired, and offers some interesting audio options.

You read that right: The Turtle Beach Recon Xbox Controller has a lot of audio-focused features—namely, a control panel that lets you quickly mute your mic, swap EQ profiles, adjust volume or microphone monitoring, and use the company’s “Superhuman Hearing” competitive audio boost for headsets jacked directly into the controller. For players who use a wireless headset or don’t need that level of dialed-in sound at their fingertips, it also features two customizable rear panel buttons. This all adds up to a decent first outing from a company that has been focused on audio for a long time—but they’ll need to get a bit more creative to make as good of a name in the gamepad space.

The Turtle Beach Recon controller is a very busy-looking controller. In addition to all of the usual Xbox Series X gamepad buttons and analog sticks, including the new create button, which allows you to record screenshots and video, in the dead center, there’s a whole audio control panel at top-center, above the Xbox button.

As a first controller effort should, Turtle Beach’s squarely covers the basics. At 5.94 x 4.69 x 2.56 inches and weighs 8.04 ounces, the Recon is slightly longer and lighter than the standard Series X gamepad. It feels solid in your hands, with comfortable rubberized grips on the sides, though it lacks the “polish” of the matte material Microsoft uses, which makes it feel a little less impressive.

Most of the buttons and sticks are effectively identical to the standard Xbox controller, save for one notable exception. Though it has a tactile click, the directional pad feels squishy, which makes for an unpleasant press, particularly when doing quarter-circles, as you would in fighting games. The analog sticks are also slightly smaller than usual, which makes my fumbly thumbs feel less stable—and less in control.

In my two weeks with the Recon, I played a wide variety of games on Xbox One X, Xbox Series X, and PC, including Call of Duty: Black Ops Cold War, Splitgate, Death’s Door, and Fall Guys. For the most part, the Recon felt like playing with a standard Xbox controller. You really have to pay attention to detect a lot of the minute differences.

The Turtle Beach Recon’s $60 pricetag is the same as the standard Xbox Series X controller, which is wireless. This begs the question, why buy a wired controller when you can go untethered?

Aspiring competitive players often opt for a wired controller to cut out lag introduced when a wireless controller sends your inputs to the console. While it’s impossible to fully remove the delay, most players won’t notice the difference, so picking a wired controller isn’t crucial for high-performance play.

Using a wired controller also cuts the need to worry about charging. Other than the $180 Elite Series 2, first-party Xbox controllers run on AA batteries or a rechargeable pack. You don’t need to think about plugging in controllers between sessions or replacing batteries when the controller gets juice from the console directly.

The Turtle Beach Recon controller’s main attraction: its control panel at the top-center. The panel features four buttons, flanked by a pair of rocking toggles. The two central buttons, mode and select, let you navigate and change most of the settings, including EQ profiles, mic monitoring, the customizable rear buttons, and the sensitivity of the right-hand analog stick, which you often use for aiming and precision control in competitive games. For EQ, you can choose among four profiles, including bass boost and “vocal boost,” which highlights chat. (To access its signature audio features you’ll need to plug a headset into the controller’s 3.5mm analog headphone jack.)

The panel’s outer buttons have specific functions. The left side turns on “Superman Hearing,” which changes the audio mix to highlight the sound of footsteps, so you can react to players as they move around you. Personally, I’ve always found the feature to be quite ham-fisted. In games like Apex Legends and Call of Duty, loud footsteps are very clear compared to other in-game effects, but the overall quality of the audio suffers. Explosions will sound scratchy. Bullets will fizzle when they should ping and whistle. It’s not a sacrifice I want to make.

The right button is a quick mute, which is nice to have because it’s easier to tap that than find the mute button on most headsets. Lastly, the toggles control the game and chat volume, respectively.

As a whole, the panel pushes the standard center column of buttons (Menu, View, Create) lower than they’d normally be on a first-party Xbox controller. Because of the tight quarters, I found myself pressing the chat volume rocker when I meant to hit the view button, which is more annoying than anything else. (Though, if we’re honest, when you need to make a quick bathroom run, a pausing problem feels just as serious as a gameplay problem). Obviously, you can retrain yourself to avoid this, but I’m still making the mistake after two weeks, which is more adjustment time than I usually need for something like this.

These mis-hits pair poorly with the elephant in the room: The audio-related functionality of this controller is only useful to a small slice of players. More and more, the best Xbox gaming headsets (think the Corsair HS75 XB and the Turtle Beach Stealth 700 Gen 2) tend to use digital connections, such as a USB cable, a USB dongle, or direct pairing to the console using Xbox’ own transmission standard, Xbox Wireless. If you opt for any of them, the controller’s analog audio connection is meaningless. The enhancements it provides can definitely enhance a simple console headset, like a pair of Astro A10s, without EQ options or special features, but it seems like a strange upgrade compared to simply buying a more feature-rich headset.

In addition to the audio controls, the Recon features a pair of customizable buttons wedged into the grips, right where your middle fingers naturally rest when you hold the controller. These rear buttons, like the panels first popularized by the original Xbox Elite controller for Xbox One, offer quick-tapping options that require less finger movement than most of the face and top buttons, which make them great for twitch-reflex inputs. For the rear buttons, you can save up to four button maps, which is a slick way to stash combos you use in your go-to games, and quickly pick which one you want to use. In general, I find the rear buttons are best reserved for the buttons that you need to reach quickest (other than the triggers, which you can already press very quickly). For a shooter like Splitgate, I mapped the bumpers (L1 and R1 in PlayStation) so I never had to take my pointer fingers off the triggers. With action games like Death’s Door, I used one to roll so I could dodge reflexively.

You can map these inputs to any of the top and face buttons by holding the select button on the audio panel for two seconds, then pressing the button you wish to map, followed by the rear button you wish to take on the function. It’s quick and easy.

Who should buy the Turtle Beach Recon controller for Xbox?

The Turtle Beach Recon Xbox controller’s feature set caters to a very particular subset of Xbox players. If you have a simple analog headset and care about the technical nuances of competitive multiplayer, the Recon is a decent option, especially for a mid-tier, $60 controller.