These updated Bose ’buds cut weight and improve noise conditioning to reclaim their place in the ring. 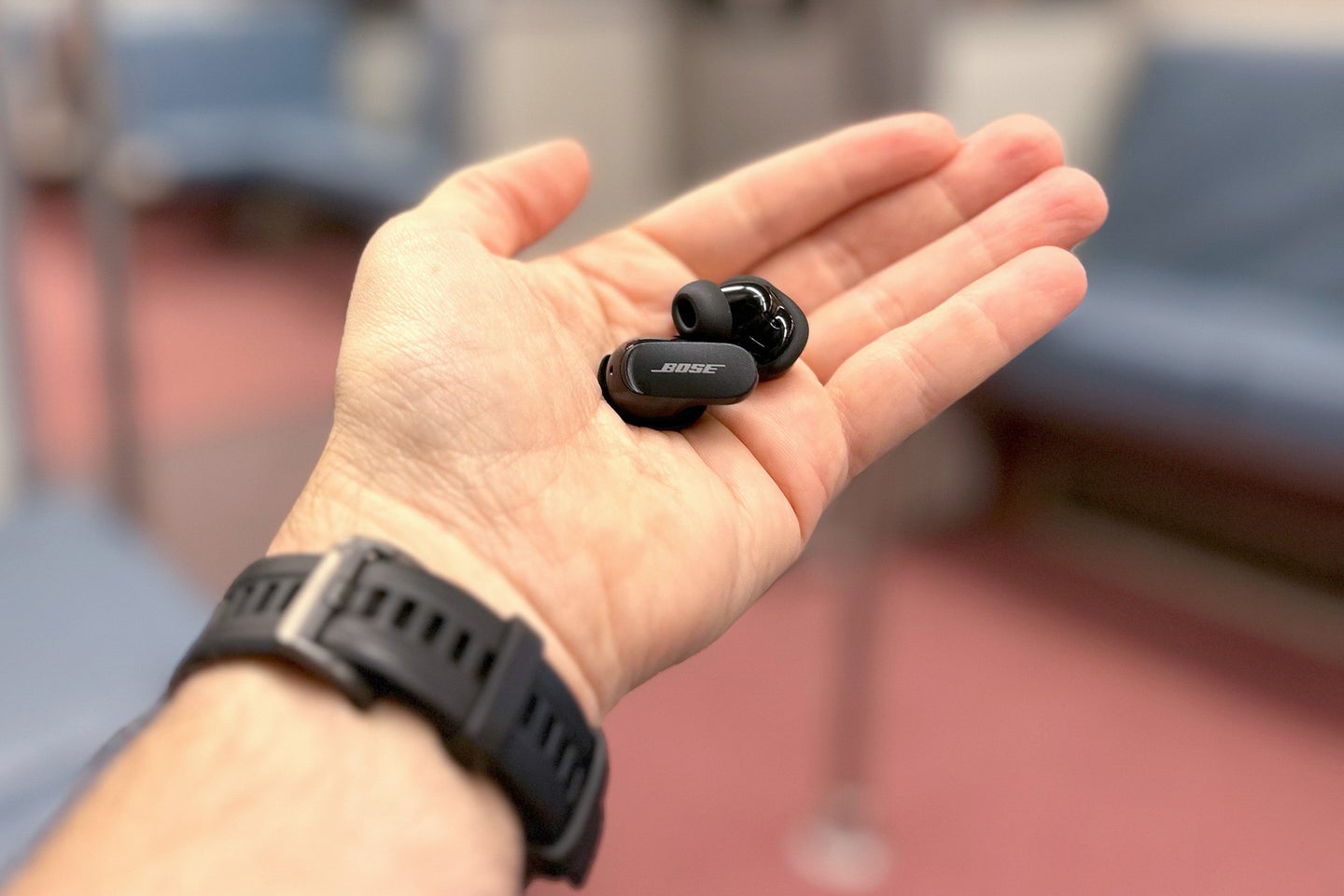 With the Bose QuietComfort Earbuds II as my commute companion, the drone of the Metro train faded into the background. Tony Ware
SHARE

After decades of negotiations, I’ve agreed to a settlement with the voices in my head. I pipe blackened music constantly into my cortex, they stop murmuring I should play with madness. The voices in my ceiling, however, are still wrecking my nerves. Workers have been rehabbing the building’s roof, which, defying all laws of space and time, seems to always need repairs directly above wherever I sit down to work. It’s been months of shouting, stomping, dragging, drilling, power bombs, superplexes, and phoenix splashes off the top rope. Thankfully, the new Bose QuietComfort Earbuds II have come along with best-in-class active noise cancellation, a more low-profile build, and an automatic sound calibration that, combined, are capable of wrestling with even the worst distractions—whether from construction or your commute.

The original QuietComfort earbuds, released in 2020, were bulky beans. The new ’buds—launching at $299 and available initially in Triple Black, with Soapstone to follow—are slimmer ovals at almost a third smaller by volume, while the case has been shrunk by almost 40 percent. These are immediately felt improvements. A selection of exchangeable silicon eartips (S, M, L) and stability bands help you avoid a loose fit (and they are IPX4 splash- and sweat-resistant, in case you get caught in the rain/take a run). And a battery life of six hours in the ‘buds plus three additional charges (24 hours) in the case means long flights are covered.

Once seated securely in your ear, the QuietComfort Earbuds II greet you with a resonant tone, measuring your ear canal’s quirks and crannies. This lets Bose’s new CustomTune proprietary algorithm personalize and adjust the acoustic response and noise reduction (as well as an expressively “Aware” transparency mode). The result is a thoroughly pleasing tuning and what I consider the most effective active noise cancellation currently available.

Toting a pouch of earbuds—the QuietComfort Earbuds II, Sony WF-1000XM4, AirPods Pro, and Sennheiser Momentum True Wireless 3—I spent several hours around Washington, D.C., taking the Metro, walking through buzzing intersections, and wandering by even more active construction. Thanks to their reduction in body—each earbud is a little over 6g, about a gram heavier than an AirPod Pro and a gram lighter than the Sony WF-1000XM4—I never noticed the QuietComfort Earbuds II, only fiddling with them to change modes/tracks/volume with the perfectly responsive touch surfaces. But that’s also because I was so busy noticing what else I wasn’t noticing.

The QuietComfort Earbuds II’s “Quiet” mode instantly dampened the drone and clatter of transit to a degree bettering everything else I had with me. Music off, the standard rumbles and metallic grinds of the subway were placed nearly indistinguishably in the distance, with only the slightest whisper of counterwaves but no in-ear pressure. And with music on at around 72 dB (up to just under my iPhone’s recommended limit) they were nonexistent. Even more impressive than how they handled typical lows and highs, however, was how the QuietComfort Earbuds II filtered out voices. Conversations, and overhead announcements, were muffled or completely masked, depending on proximity and playback (yes, I almost missed my stop while taking pictures of the ’buds because I didn’t hear the station announcement).

Thankfully, sucking out the midrange around me didn’t hurt musicality or sonic imaging. The QuietComfort Earbuds II use a 9mm dynamic drivers and Bluetooth 5.3 (supporting the SBC/AAC codecs) to deliver a consolidated presentation that’s smooth without forgoing all textured transitions. Listening to a wealth of Björk to black metal, I enjoyed the authority of bass that was punchy and well-paced, midrange that accurately conveyed ambiance and inflection, and treble that supported this character without getting aggro. You might not get the sweeping dynamics of an in-ear monitor, but the dimensionality for an ANC earbud is admirable. The stock tuning of the Sony WF-1000XM4 starts out more boomy with recessed vocals, though the Sony app also offers far more extensive EQ options so you can end up as crispy/shouty/balanced as you want. And the Sennheiser Momentum True Wireless 3 still retains a more innately rich, natural fluidity when it comes to pure reproduction, but the gap isn’t a gorge.

Higher-resolution codecs (like aptX/LDAC, available on other models) would be appreciated, and preferred, but the QuietComfort Earbuds II’s SBC/AAC assures maximum compatibility across both Android and iOS devices. There’s also no multipoint connection—a decision supposedly made to prioritize signal stability over increased connectivity. And calls, according to the person on the other end, let in far too much of the background noise CustomTune filtered out. However, the ANC eclipses all others (with the Sony WF-1000XM4 a still-convincing runner-up), making the QuietComfort Earbuds II the current best buy if that’s your key criteria.

With only a few days of using these earbuds, I’d be hard-pressed to say I’ve explored every facet. There are setting-specific presets in the app I haven’t configured, I’d like to pit them against full-sized headphones, and there’s the small matter of the upcoming AirPods Pro 2nd generation, which will introduce a serious new consideration at the $249 price point. And it’s somewhat surprising to find a flagship wireless earbud in 2022 that doesn’t offer a wireless charging case, which these don’t. For the moment, however, the Bose QuietComfort Earbuds II hold the undisputed ANC championship belt.