For earbud shoppers hoping to save cash, the Skullcandy Dime earphones make sense for fewer cents. 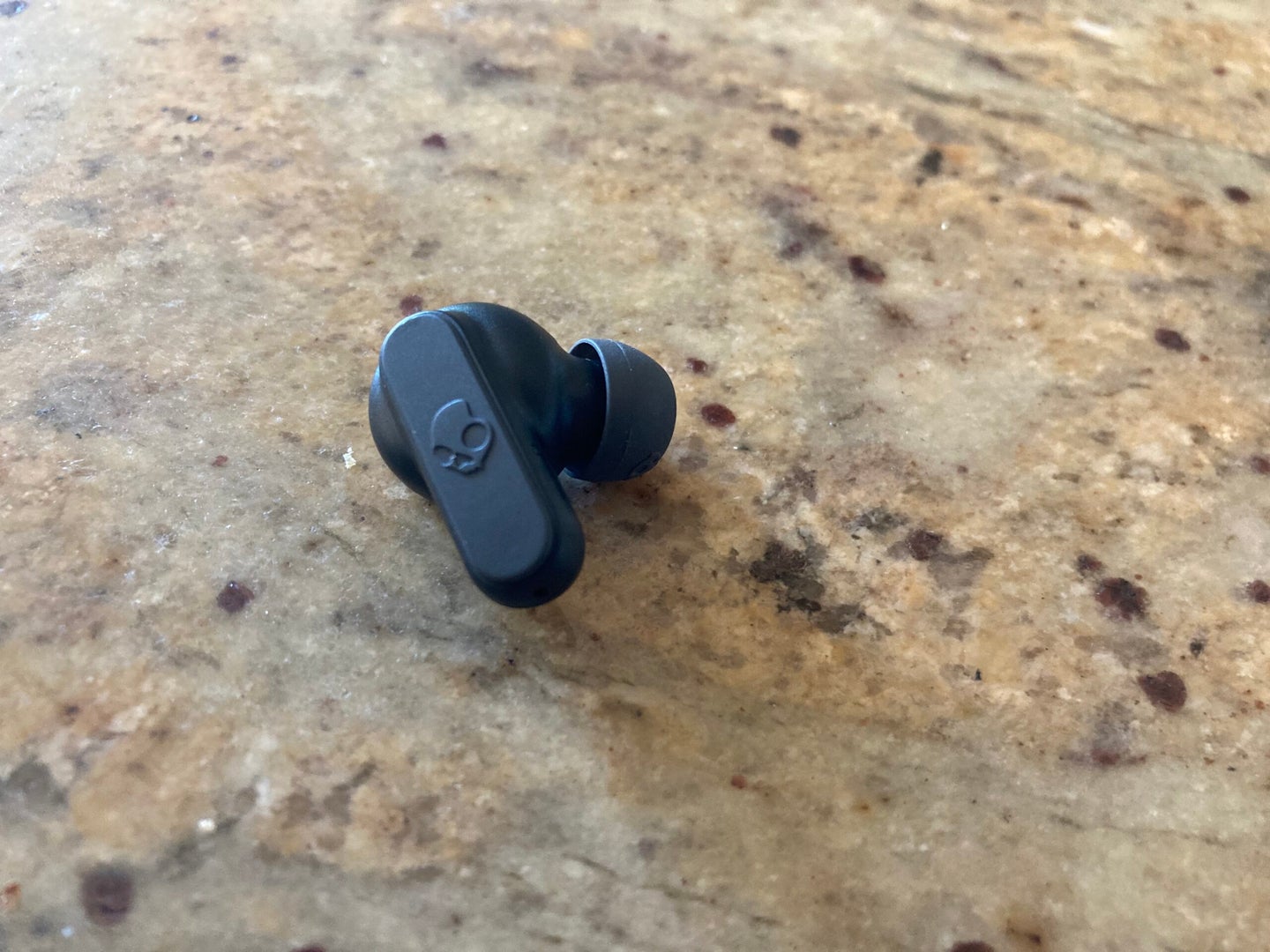 The $25 Skullcandy Dime earbuds offer a lot for a little. Andrew Waite
SHARE

Not many years ago, true wireless earbuds were strictly a luxury item. Since then, the tech has gotten much more attainable and untethered buds have become as ubiquitous as the white-corded iPhone buds of yore. Still, the best Bluetooth earbuds typically cost more than $50 a pair, and they go way up from there. Models like the $25 Skullcandy Dime earphones, released in March 2021, are making a strong case that cheap doesn’t have to mean bad. Take detailed sound quality that provides clarity across frequencies, mix in useful features like access to a smart assistant and call handling, and toss in durability and comfort that’s fit enough for any workout, and you’ve got some of the best wireless earbuds if you’re on a budget. They’re not perfect. In my weeks of testing them, I noticed a few design flaws and usability quirks that prevent these earbuds from dethroning higher-end models. Still, as Skullcandy boasts in its promotional materials for the Dime: “Bring on those expensive…brands. Dime backs down to no one.”

What are the Skullcandy Dime earphones?

At $25 a pair, the Skullcandy Dime earphones are unapologetically cheap. The marketing materials even challenge “those expensive, ‘look-at-me’ earbud brands.” Of course, there are even more expensive Skullcandy earbuds, like the $100 Indy ANC Noise-Canceling earbuds. The extra cash buys the Indy ’phones greater durability than the Dime earbuds (an IP55 vs. IPX4 protection rating). The Indy earbuds can survive being sprayed with a hose, while the Dime earbuds are only designed to resist splashing. The more expensive earphones also provide personalized sound control and almost twice the battery life: 12 hours compared to 32 hours. Still, for much less, the Dime true wireless earphones deliver a lot for a little. They provide Skullcandy’s signature sculpted sound—punchy, slightly bassy but not boomy—and let you answer calls, skip tracks, adjust the volume, and talk to Siri without touching your phone. That’s a long feature list for a $25 gadget.

To be this cheap, these wireless Skullcandy earbuds had to design on a budget. Those cost-cutting decisions become apparent as soon as you open the box. The plastic charging case checks in at roughly the same size as a car key fob. It feels flimsy, and its flippable lid will easily snap if you pull too hard. The case also offers no extra waterproof protection (something the much-more-expensive Jaybird Vista 2 does). The earbuds themselves are made with the same matte plastic material as the case, but an IPX4 rating means they can handle sweat and rain—just dry them before you charge them.

At 4 grams each, the Skullcandy earbuds weigh less than a quarter (a whopping 5.67 grams). Each Dime bud comes equipped with an oblong stem, about the size and shape of a Mike and Ike candy. Inside, you’ll find a 6mm driver, which is the same size as some of the best true wireless earbuds (those Jaybird Vista 2 again) The Dimes also employ microphones that allow you to talk to friends or your virtual assistant.

Three silicone ear gel sizes let you find an option that fits snugly. That tight fit is what delivers noise isolation. That passive isolation doesn’t block out droning sounds like Active Noise Cancellation would, but it’s enough to effectively limit ambient sound. I found the medium gels to be secure, even during burpees and jogs.

Setting up the Skullcandy Dime earphones

Remove the protective paper on these Skullcandy earbuds, just like you would before popping a Starburst or Tootsie Roll into your mouth, and then enjoy. I foolishly neglected to do so, making for a few moments of frustration. I was also frustrated by the QR code on the packaging. It says “scan to get started,” but I was never able to get my iPhone SE to register the code.

Pairing the earbuds to my phone didn’t ultimately require an app. In fact, the Dime earbuds don’t sync to the Skullcandy app at all. After charging the earphones for about 30 minutes—when I first opened the case, the LED lights signaling that the buds were ready to go weren’t illuminated—I removed the earbuds from the case. They paired to each other, and then when I put them into my ears I was prompted to pair them to my phone. I opened my phone’s Bluetooth settings, clicked on the “Dime” listing, and I was ready to rock. If I wanted to pair the Bluetooth earbuds to a new device, I could hold down both earbud buttons for four seconds to turn them off and then hold one earbud button for four seconds to start a new pairing process.

Next, I pulled up a Spotify playlist to test out the controls, which are perfectly functional but also a little clunky. Press the rubber Skullcandy skull logo once to pause, and press it twice to adjust volume (left to lower, right to increase). Three presses access your virtual assistant. Pressing and holding changes tracks. I found the button on the earbuds difficult to press, often requiring me to pinch the stem with my thumb and middle finger. All of that made pressing feel especially cumbersome, particularly when doing something as simple as raising the volume by one level required two clicks. It’s a far cry from the delicate buttons or gesture-based touch controls you’ll find in some high-end models.

While Skullcandy definitely made sacrifices when building the Dime earbuds, the Park City, Utah-based company didn’t sacrifice on sound. The depth of the audio is aided by the tight fit that seals out ambient noise and prevents the earbuds from falling out during intense activity. Perks like virtual assistant connectivity and a microphone that lets you clearly field calls mean $25 could very well be all you need to spend on the best wireless earbuds that work for your morning run, afternoon meeting, and evening commute. That low price is a feature in and of itself. If you’re doing an activity during which you might lose a bud, it hurts a lot less to drop one of these in a big pile of leaves than it does something like an AirPod.

For budget earbuds, the Skullcandy Dime earphones deliver exceptionally detailed sound. Everything from the guitar strokes on Dave Matthews Band’s “Samurai Cop” to the horns on the hook of Beyonce’s “Crazy in Love” to Michael Barbaro’s persistent “hmms” on The Daily podcast, came through crisply thanks to the 6mm driver. There is no sound-mixing customization, and the earbuds skew slightly bass-heavy, but I never felt like they were thumping too much or were too muddled. The headphones also transmit the sound accurately across all frequencies, and handle dips and peaks seamlessly, with a frequency response of 20Hz to 20KHz. They’re impressive considering the price.

With the ear gels securely in place, these are billed as noise-isolating earbuds. That means, while they don’t emit neutralizing sound frequencies to actively counteract ambient noise, they do effectively mute the world around you. If you need to hear nearby sounds there’s no Transparency Mode (or SurroundSense or whatever marketing term manufacturers use) like you’d find in much more expensive active noise-canceling earbuds, but you can listen with just one earbud. That’s just what I did to stay alert to traffic during an evening jog and it did feel like I was cutting my listening experience in half, but the sound was still full enough to keep me motivated during the run.

Lets you engage in clear talk

Like the sound quality, the onboard microphones in these Skullcandy true wireless earbuds are surprisingly accurate. I was satisfied when I tapped three times to activate Siri while my phone was in my pocket, and the virtual assistant correctly answered “James Buchanan” when asked to name the 15th president.

My friends and family on the other end of phone calls said I came in loud and clear. However, the microphones don’t handle noise well, which means when I tried talking to my wife from a crowded rest area during a road trip, she was much happier when I stepped outside. Inside, the microphones picked up the distracting sounds of people chatting and ordering burgers. More expensive models typically combat this with an array of beam-forming mics that can hone in on your voice and use algorithms to identify and counteract distractions. That’s obviously not an option here.

Plays for a few hours

Battery life is another place where the Dime earbuds reveal themselves as cheap earbuds. They only play about 3.5 hours per charge, with the case delivering two full charges for 12 hours of battery life. To compare, the Tribit FlyBuds 3, which sell for $40, offer five hours of battery life with an extra 95 hours from the case. When you’re out of juice, connect the micro-USB charging cable. The cord itself can also only be described as micro—at about 4 inches long, I had to leave the case hanging from the outlet. Thankfully, even with both buds locked in place, the case only weighs 32 grams.

So, who should buy the Skullcandy Dime earphones?

Costing just $25, the Skullcandy Dime earphones are hardly an investment. And while the plastic build, limited customization, and clunky controls reveal the wireless earbuds as the budget buy they are, the detailed and robust sound belies the price point. Plus, the silicone ear tips and light weight make for a comfortable fit that should stay in place, even when you exercise, while the IPX4 rating offers plenty of protection when you work up a sweat.

At a similar price point, the JLab Go Air true wireless earbuds are bulkier but offer longer battery life and more sound customization. And spending $15 more for the Tribit FlyBuds 3 will give you multiple days of charge from the case and an IPX8 protection rating that means those Bluetooth earbuds can handle being submerged in more than 3 feet of water.

Still, the audio quality and comfortable fit of the Skullcandy Dime earphones make them some of the best budget wireless earbuds on the market. So whether you’re looking for a second set of wireless earphones to take to the gym or want the best cheap earbuds that you can easily afford—or afford to replace after accidentally leaving them on the bus—these $25 Skullcandy true wireless earbuds are a sound choice.