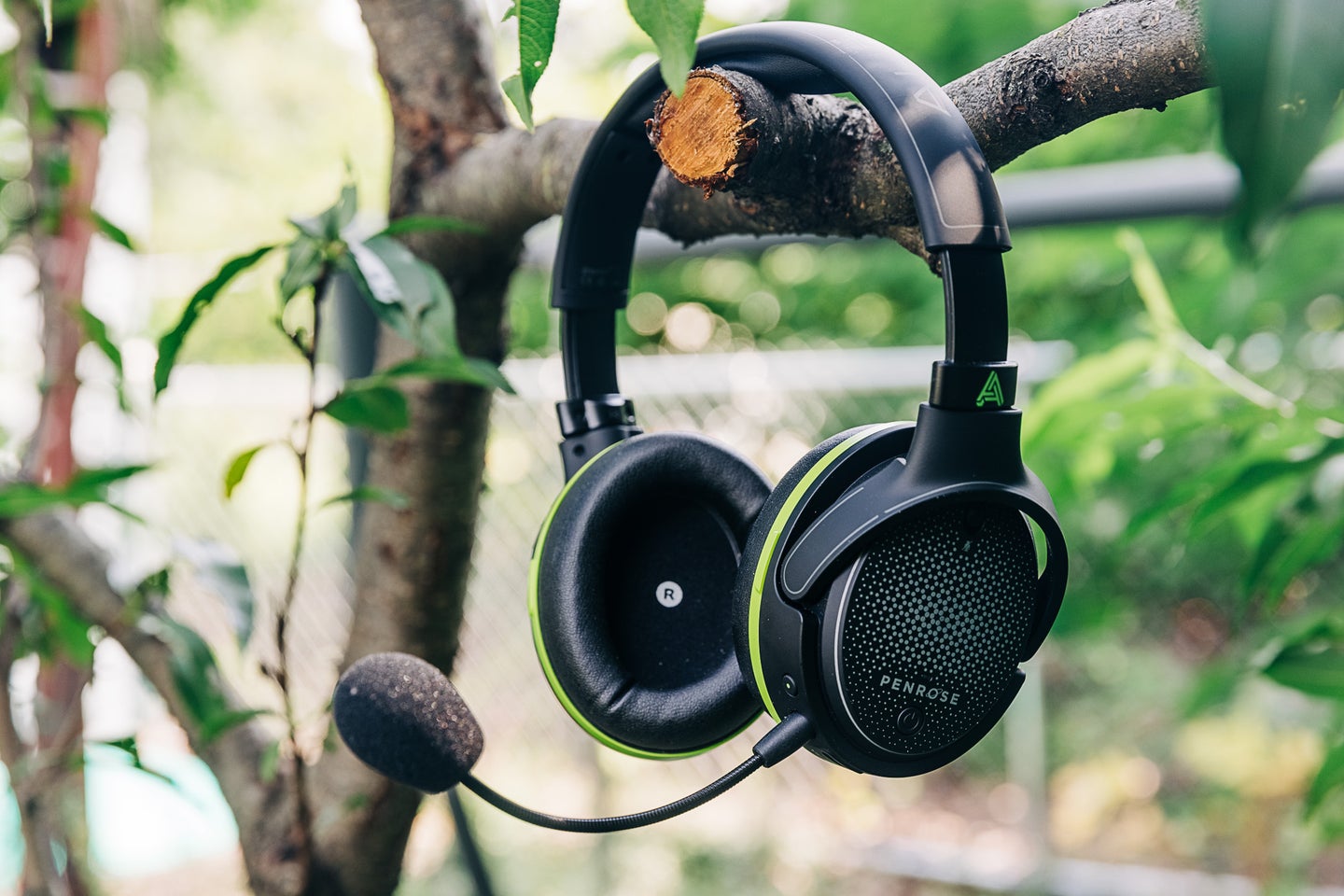 Bass is important when it comes to video game sound. You want to hear the low rumble of your laser rifle as it hums wave after wave of pain at your digital enemies. When you finally manage to blow up that generator you had to go through all those aliens to get to, you really want to feel the explosion. Low-end gives the game its oomph. And the Audeze Penrose X gaming headset has oomph to spare.

Powered by Audeze’s planar magnetic drivers, this wireless gaming headset doesn’t fuss too much with spatial audio or super-convincing surround. But it does churn out ample volume and rumble in a semi-luxurious package.

What is the Audeze Penrose wireless planar magnetic headset?

Planar magnetic headphones work differently than the typical over-the-ear ’phones you’re probably used to, which rely on cone-shaped drivers made of paper, plastic, or metal. This setup can produce some truly wonderful sound, but it can also experience distortion when that cone doesn’t move in perfect harmony.

Audeze’s planar magnetic headphones, however, employ massive, flat, extremely thin diaphragms and powerful magnet arrays that can move large amounts of air without malforming, which prevents the sound from breaking up and sounding, well, crappy. The ability to maintain a composed tone even during intense sonic workouts gained Audeze headphones a sizeable following among audiophiles. Now the technology has trickled down.

Outside of the earcups, the Penrose headset looks and feels rather familiar. In fact, it’s extremely similar to the HyperX Orbit headset I’ve used for gaming in the past. The Penrose keeps all of its built-in controls contained on the bottom of the left earcup. You can adjust the mic volume, the audio level, and play/pause music with a single button. It’s a pretty standard setup.

Before we get to hear the boom coming from those drivers, we have to connect the Audeze Penrose X to an audio source first. I tested out the Xbox-specific model of the Penrose, which works with Microsoft’s Xbox Series X next-gen gaming console as well as a PC (there’s also a variant designed specifically for PlayStation, PC, and Mac).

The main connection comes from a dongle that creates a low-latency 2.4GHz connection between the machine and the headset. In the gaming world, latency is universally bad. The faster the headphones can talk to the console or computer, the less delay there is between the in-game action and your eardrums. The dongle is nearly 2 inches long and has a hardware switch on it to go between Xbox and PC mode. From a design standpoint, it feels a bit dated, but the connection is fast and very reliable, so we’ll accept function over fashion in this case.

You can also connect to the Audeze Penrose X headset using the included 3.5mm audio cable. Even with a direct connection, however, the headphones need to be charged in order to pump out sound, unlike some more consumer-oriented headphones like the excellent Sony WH-1000XM4.

The Audeze Penrose X headphones can also connect via Bluetooth, which seemed to work just fine, but you’re paying for the speed of the wireless connection and these are too bulky to really wear around on the street, so Bluetooth is best as a backup. It can also come in handy if you want to dual-pair the Penrose with a mobile device. Most players handle this with a service like Discord running on the PC, but if you want to save all that processing power for gaming and streaming, you can get your smartphone into the mix.

How does the Audeze Penrose X gaming headset sound?

I spent the first couple of days with the Penrose setup just like it is out of the box. There’s always the temptation to start tweaking away immediately, but I think it’s important to hear the default settings since many players will never change them.

As expected, the bass booms. In-game explosions I caused sounded perfectly satisfying thanks to those 100mm drivers (in comparison, dynamic headphone drivers average 30mm to 50mm). Explosions my opponents caused were appropriately infuriating. The same was true when watching content. I streamed the wonderfully ridiculous Nicolas Cage classic “Con Air” and, while the Penrose couldn’t do anything about Cage’s perplexing accent, it did justice to the epic crash near the end of the film.

The mids sound great, too. In-game dialog sounds crisp and clear for the most part. Things start to get a little less flattering in the highs. Planar magnetic drivers do everything in their power to manage distortion, but I found the highs harsh under the standard configuration. Listening to “Latin Grammys” by Action Bronson, the “s” sounds and higher-pitched parts of the beat had a slight edge that my ear didn’t love. I noticed a similar phenomenon while gaming. Alien screeching is supposed to be unpleasant, but it bordered on physically uncomfortable if I kept the volume too high.

Audeze doesn’t expect everyone to like the stock tuning, so the company built an app for mobile and PC to specifically to customize the overall sound. I found the app nicely designed and easy to navigate. Of course, actually dialing in the sound quality you want requires some knowledge, or at least considerable patience when it comes to trial and error. I spent about 20 minutes messing around with the settings until I tamed the treble and got it dialed to what I like.

You have to create your own presets by adjusting individual channels unless you want to download presets from the Audeze site. Some presets address specific types of music, while others provide sound tweaked to work with individual video games. So, if you want the ideal “Rocket League” or “Call of Duty: Warzone” mix, you can download it. I tried it with “Call of Duty: Warzone” (a game at which I’m truly terrible) and didn’t notice a profound difference in performance. But, if you spend every waking hour in the game, the difference may be more pronounced.

To be clear, the sound quality was totally fine—and even excellent in the low-end—before the tweaking. But, if you’re going to spend $300 on a headset, it’s worth the extra effort to get it just right.

What about this “spatial audio” thing?

If you follow high-end gaming gear, you may be familiar with Penrose’s bigger sibling, the Audeze Mobius. That $400 headset (!) commands an even more premium price thanks to its advanced chops when it comes to spatial audio. The Mobius has built-in head tracking and knows when you move your noggin, adjusting the soundstage to match.

The Audeze Penrose X, on the other hand, doesn’t support any of that advanced spatial stuff. Audeze is very clear that the Penrose was designed as a two-channel system designed for maximum quality in a stereo arrangement. The console can still pump out “3D sound” via platforms like Dolby Atmos, but its effect is somewhat limited. It may sound like a strict downgrade, but some people (like me) actually prefer this setup. I sometimes find the hardcore spatial stuff a little too immersive. If you’ve ever played a horror game in an expensive pair of head-tracking headphones, you already know what I mean. If you haven’t and you’re thinking about trying it, make sure you don’t have a full cup of coffee on your desk because you’ll spill it on your favorite pair of Vans slip-ons and ruin them. It happened to me.

The previously mentioned HyperX Orbit headset goes hard on head tracking and it’s cool during playtime, but it would sometimes kick in when I’m just casually listening to music or even talking on video chats and it was distracting. If you want that full-fledged immersion, however, the Penrose might not be your best bet.

Like many other high-end gaming headsets, the Penrose feels a bit like strapping a pleather sofa to your head. The headset weighs more than 11 ounces and thick layers of padding cover almost every surface that could possibly touch your head.

The ear cups are comfortable, but I actually found them a touch small. I had to maneuver them a little to get my entire ear encased in the cup instead of just plopping them on my head. Once they’re in position, the memory foam pads keep them plenty comfortable.

The closed-back design helps with sound, but it also makes the Penrose run a little warm after a long bout of wearing it. The clamping force isn’t excessive, though, and the massive pad across the top of the head prevented it from digging into my scalp, which is a plus.

Ultimately, the Audeze Penrose X is a comfortable gaming headset, but you’re not going to forget you’re wearing it. Neither will anyone watching you on-stream since it’s a fairly large chunk of gear.

Like other high-end gaming headsets, the Audeze Penrose X includes a detachable “Blonde Ambition”-era Madonna-style headset mic that curls out from the left earcup and sits in front of your mouth. Audeze calls it “broadcast quality,” which seems a little outdated when so many streamers and even frequent Zoom meeting attendees have upgraded to dedicated PC microphones.

Overall, I found the Penrose mic solid, but not mind-blowing. No one in my game squads or Zoom calls had any issue at all with the audio. At one point, I let my son try it with his Xbox and he’s the kind of gamer that yells when things don’t go his way. In that situation, I was actually impressed that the mic could handle his loud exclamations without cracking up. I’d still prefer he learn to not yell while gaming, but at least he won’t blow out everyone’s eardrums with distortion this way.

So, who should buy the Audeze Penrose X?

Even with all these words behind us, there are still positive things I could say about the Audeze Penrose X gaming headset. The 13-hour battery life is solid and reliable. Plus, it comes with an extra-long USB-C charging cable so you can keep it plugged in as you game even if you’re out of juice.

For $299, there are a lot of really excellent options in direct competition. If you’re specifically looking for an Xbox Series X headset, Microsoft’s first-party offering offers surprisingly excellent performance for just $99. It doesn’t compete with the Penrose on power and overall quality, but that’s a big price difference.

While I haven’t tried the $400 Mobius, I have used comparable headsets that offer deep spatial audio features. Frankly, I still like the stereo setup better, but I’m also a hybrid user. If you spend your nights playing games and your days discussing various Excel spreadsheets, I think the Audeze Penrose X is a better option for wireless gaming headphones. Just make sure to plug the transmitter into the back of your computer so you don’t almost kick it and break it. I learned that one the hard way as well.