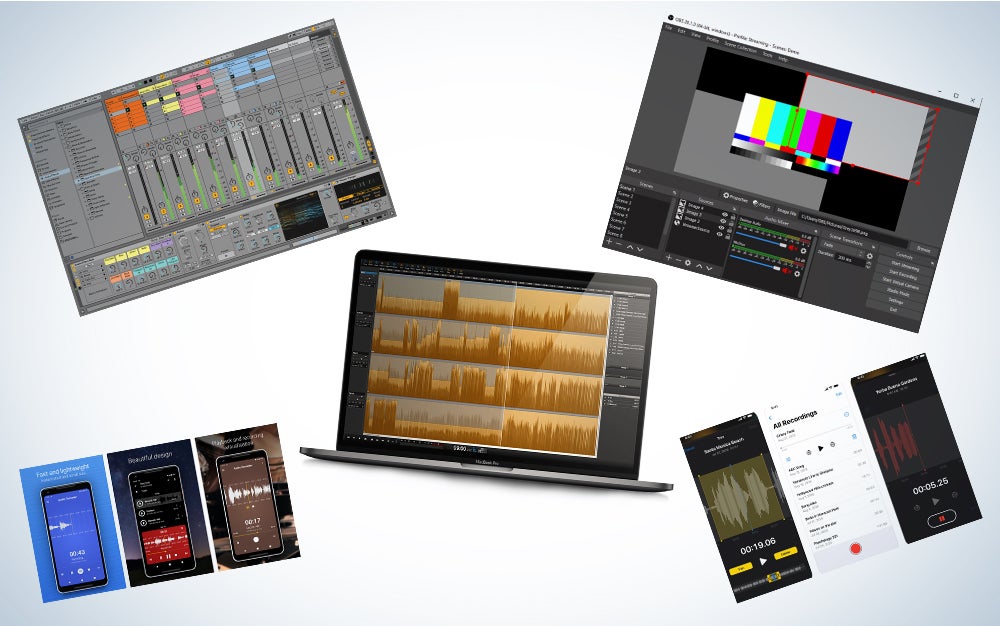 Whether you're livestreaming or archiving, the best recording software is as good as what you put into it.

We’ve all been there: You said the perfect thing, hit the perfect note, heard the perfect mix, made the perfect run—the kind of performance(s) you’d really like to share, except you were alone. Well, with the best recording software, you can immortalize those moments. Whether you’re preserving artistic works, activities to analyze, vivid family memories, or just a way to flex on friends, the right software lets you take notes, capture video, create songs or shows, play a gig, and much more. And, whether you’re archiving personal achievements or kickstarting your career, you don’t have to invest a lot—just the time to check out our top picks.

How we selected the products

The best recording software covers a broad gamut of both beginning and advanced audio (as well as video) needs, from casual notetaking to creating professional-quality songs. For that reason, we looked at free as well as paid products, using a combination of our own in-house research, critical consensus, and trusted user impressions. Heavy consideration was also given to the top products selected in the best voice recorder apps, as well as the best digital audio workstation for audio engineers of any kind of budget, which are guides that can provide further options to consider to find the best audio recording software for your needs.

What to consider when shopping for the best recording software

Think about what would define the best recording software for your personal interests. You may want to start creating your own songs for fun or profit, which may steer you toward investing in a professional-quality program for your computer. Or perhaps you want to record and share your train of thought before it derails, which you may be able to do with the smartphone in your pocket. The legend goes that Keith Richards heard the riff to “(I Can’t Get No) Satisfaction” in a dream, woke up long enough to get it into a bedside recorder, then passed back out. Could your masterpiece be next?

Do I need to spend money on recording software?

If you’re just starting out and unsure of the depth of editing you can perform, you probably don’t need to spend money on recording software. But if you’re looking to make music to share with others personally or professionally, or if you have an idea you think deserves to be broadcast to the world, it’s not a bad idea to become informed on what paid programs can offer to an audio producer.

What is a DAW and do I want one?

DAW is an acronym for digital audio workstation, which is the ground control for advanced music production that’s done on a computer. Popular DAWs such as Ableton Live 11 and Avid Pro Tools are used by professional audio producers for music, TV, and film. If you want to record, manipulate, and arrange multiple tracks, you’ll want to consider having a DAW. If you’re just recording your thoughts, a lecture, a one-on-one interview, etc., it might be overkill.

Do I need to pay for a DAW to make music?

You don’t need to invest in a whole DAW to make music on a casual level. For example, beginners can try their hand at producing music in some of the best recording software for Mac: GarageBand, a free software program for macOS (and iOS) users that comes preloaded on Apple MacBooks, iPhones, and iPads.

Why it made the cut: Ableton Live 11 is the DAW that sets the industry bar, and a great DJ program if you want to set the bar off.

If you want to create, record, and play music live, Ableton Live 11 is the best music recording software to learn. Though the learning curve is steep for beginners, it’s a versatile tool for music producers at all levels, as well as for DJs who want to rearrange or remix songs from other people and add their own flair. You can choose to view your tracks linearly or as non-linear loops and you can also pair Ableton Live with the Ableton Push 2 hardware controller for a more tactile way to create. However, when you’re looking for the best DAW software for your needs, the often-copied Ableton isn’t the only game in town. If your goals are serious, you may also want to take a look at Avid Pro Tools, which is still an industry standard for many professional projects, or PreSonus Studio One 5 Professional, which is considered a well-rounded DAW for composing, recording, and even for capturing live performances.

Why it made the cut: With the best recording software for games, gamers can record, analyze, and add commentary to their sessions, or broadcast them live with OBS.

OBS Studio is a free and open-source software program and the best screen-recording software to capture your gameplay for later analysis and commentary, which can help you to improve your skills (or at least continue a gloat session with the losing player). Users can record video and up to 8 audio channels and get a taste of what more professional programs can do with a paid upgrade. In addition to using OBS Studio as the best game recording software to capture your screen, you can also use the program as a broadcasting application to show your gaming, podcasting, storytelling, or DJing talents to the world; OBS is an acronym that stands for Open Broadcaster Software. OBS Studio is a popular choice to livestream video games on platforms like Mixer, Twitch, or YouTube. You can even stream in surround sound, a feature that is more typically seen in industry broadcast standard software programs.

Why it made the cut: This podcast-focused recording software transforms citizen journalists into pros.

Our guide to the best podcasting software features praise for Hindenburg, and it’s not hard to see why. Despite its original, reporter-like name, the program formerly known as Hindenburg Journalist isn’t designed just for professional members of the media—Hindenburg (available to license in single-track LITE and multitrack PRO versions) is packed with EQ and level tools specifically for recording and cleaning original voices (physical and creative ones) making it the best audio recording software. It allows anyone to get crystal clear clips and then manipulate segments to add additional music and sounds. You can also organize your creation on a unique clipboard that can be used as a vision board to assist you in the process of editing. Once you’re done, you can upload a finished podcast or share it directly to SoundCloud or Libsyn, among other distribution channels. You can also pair your software with one of the best podcast microphones to make sure your voice is as powerful as possible. The program doesn’t support livestreaming, which will be a drawback for some, so if you’re looking for a free, open-source software alternative that does, check out OBS Studio.

Why it made the cut: Recordings can be captured and edited easily, with no price of admission.

If you happen to be the owner of an iPhone, iPad, or Apple Watch, you’ve already got the best voice recording software for IOS. The Voice Memos app is built right into those products, which means that you’ve already got an extremely handy way to make, edit and share voice and ambient recordings without having to buy anything new or learn anything complicated. Once a recording is made, you can trim the clip or make sound adjustments, such as eliminating background noise. You can choose to sync all of your recordings across your various Apple devices so that you can access and play them from wherever you need. You can save recordings in iTunes or easily share them with friends via email, text message, and AirDrop. And you can even use Voice Memos as a sketch pad or virtual idea bank that can be imported into GarageBand (which also comes on iPhones and iPads) and used to create songs.

Why it made the cut: Audio Recorder offers quick and intuitive voice recording for Android users.

Audio Recorder is a free, open-source software application for Android that can make a recording in mono or stereo at the quality level (bit rate and sampling rate) that you select. You can save the recording using either the M4A or the WAV file formats. It’s one of the best voice recorder apps that we have seen for Android thus far. There are some minor drawbacks at play with Audio Recorder to consider, however. For one, you can’t use the program to edit (like you can with the iOS Voice Memos) and it also doesn’t record if you’re running other apps. But Audio Recorder still gets high marks as a free recording app for Android users for being well designed and straightforward to use on the fly, allowing users to post audio directly to social media, among other features. It’s free, but not plastered with ads, which is also pleasant. Just remember to back up the files you want to ensure won’t be lost, as it won’t happen automatically.

Q: How do I record internal audio on my computer?

The free, open-source software program Audacity—which has versions compiled for Windows, macOS, and Linux, among other operating systems—can help you record internal audio on your computer. The company tutorial provides tips on how to make the recording you want. One caveat: the tutorial warns that the sound quality of these recordings works best with existing audio files, rather than recording audio as it plays. And if you’ve still got a computer with a headphone jack, you can plug in a 3.5mm male-to-male stereo audio aux cable attached to an external recorder.

Q: What software do YouTubers use to record audio?

The best recording software for YouTube depends on what the content demands. Every day, you’ll see countless videos uploaded to the platform that were created with mobile phones and no additional software, but YouTubers can opt to use programs such as the free, open-source, best screen-recording software OBS Studio, or Apple GarageBand if they want to record just pure audio.

Q: What is the best recording software for beginners?

People who are looking to experiment with recording musical sounds may perhaps be least intimidated by GarageBand, which comes preloaded into new iOS/macOS devices (iPhones, iPads, MacBooks, iMacs) and is a good contender to be the best recording software for beginners. The program allows users to play and record virtual instruments, manipulate premade sonic loops, and even capture their own vocals.

The final word on selecting the best recording software

The best recording software for you will be different if you’re looking to create a professional quality sound recording that makes its way out into the world or if you just want to analyze why you lost that last game with frenemies. While spending money for good tools is never a bad idea, between free, open source programs and top-notch apps that come with your phone, you don’t necessarily have to make a big investment.