Boaters like spray and sun in their face, not exhaust. The first hybrid sport boat, courtesy of a co-designer of... 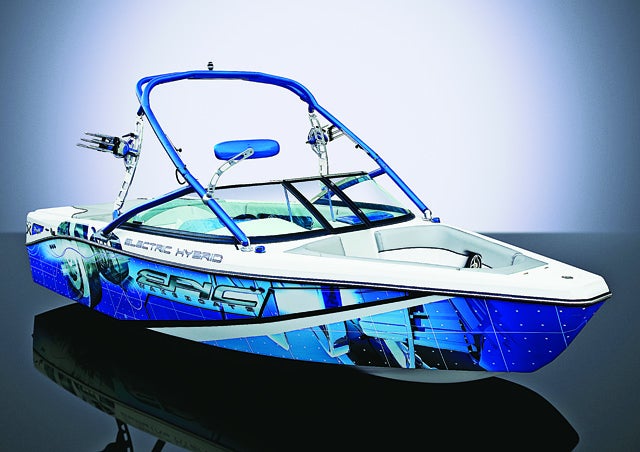 Boaters like spray and sun in their face, not exhaust. The first hybrid sport boat, courtesy of a co-designer of the Aptera electric car, delivers cleaner thrills.

Water resistance means that a 38mph boat requires as much power as far-speedier cars, and marine engineers have struggled to give a hybrid enough oomph. Chris Anthony and his team boosted an electric motor to 268 horsepower, partly by passing more cooling fluid over it to let it spin ultra-fast without overheating. Lithium-ion batteries (2,200 pounds of them), stored under the floor, feed the motor silently for up to three hours. When they run low, a gas generator kicks in. Even then, the system uses half the fuel (about three gallons per hour) and spews half the emissions of other wakeboard-ready motorboats, since the generator only needs to rev high enough to recharge the battery, not to move the drivetrain itself.

Shipping this month, the Epic 23e has a waiting list even at $150,000. Anthony expects the price to drop closer to gas models within two years as batteries become more common and as fuel costsand emissions limits turn the tide toward greener boating.