Are Wii Balance Boards the Future of Airport Security? 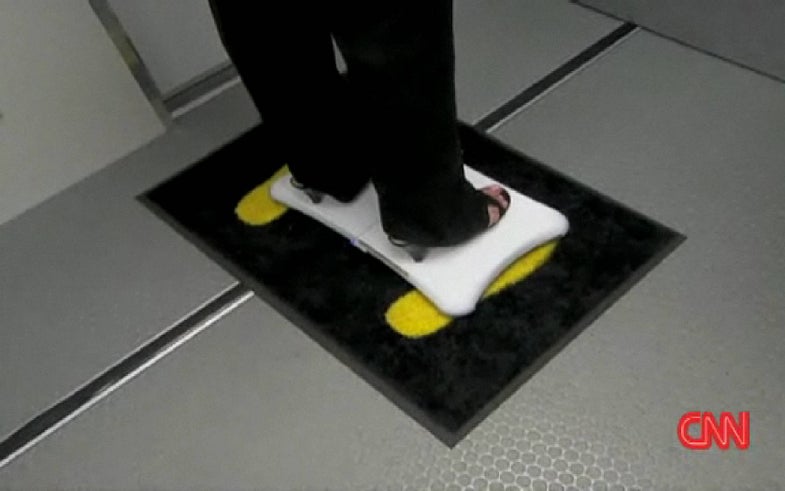 Way to suck the fun out of Wii. CNN
SHARE

Airport screening technology has turned to an unusual accessory — the Nintendo Wii balance board — to identify fidgety, nervous passengers who might have explosives or illegal items concealed on their persons. Or they could have had a long day and just don’t want to stand still.

The Wii balance board is part of a $20 million Homeland Security-funded project called Future Attribute Screening Technology (FAST). Researchers hope that using sensors to detect passenger heart rate, breathing, shifty eyes, body temperature and yes, fidgeting, could help security figure out who might have something to hide.

Some sensors take the temperature profile of people’s faces for signs of stress. Others track eye movement, pupil size, and blinking.

Researchers specifically modified the Wii balance board to show how someone’s weight shifts, and have begun studies on whether a certain level of fidgeting indicates the need for secondary screening. But variations in human behavior and standing still (or not) could make this a moot point.

Outside of the security arena, Wii accessories may also find use in medical applications. A separate project looked to provide home CPR training using the Wii remote.

CNN reports that civil liberties advocates have complained of the Homeland Security program’s goals as an invasion of privacy. Outside experts also seem dubious that the approach will yield an effective screening method — after all, issues with fuzzy results continue to plague lie detectors and other tests.

Concerns aside, field testing of the overall screening system is slated for 2011. But don’t expect that it will make going through airport security any more fun when you get pulled aside for failing the Wii balance test.