It may be ugly, but the Gumpert Apollo just proved it's the quickest production car around Germany's grueling Nürburgring. Apparently supercars aren't dead after all 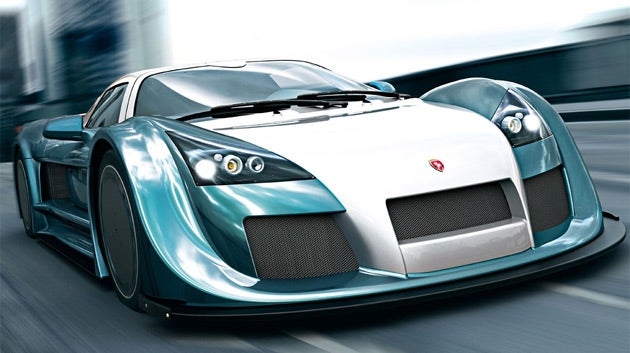 The Gumpert Apollo Speed may be uglier than a naked mole rat (please, don’t Google the rat, trust me), but it’s also ridiculously fast. So fast, indeed, that the Apollo this week set the fastest lap time of any production car around German’s legendary Nürburgring Nordschleife. Why does that matter? It proves some people will never stop manipulating physics for purposes of speed, no matter how much time others spend on fuel efficiency. Twenty-six-year-old racing driver Florian Gruber did the lap in 7:11.57, taking a 10-second bite out of the Dodge Viper’s record of 7:22.1.

The Apollo Speed is, to put it mildly, a racecar for the street. It’s powered by a 4.2-liter V8 sourced from Audi, and twin turbocharged to put out 700 horsepower — about six times that of a Honda Fit, which weighs in the same neighborhood of 2,500 pounds. Such massive power flourishes by way of a body designed to direct passing air to produce hundreds of pounds of aerodynamic downforce, increasing the pressure between the contact area of the tire and the road surface. That provides tremendous grip by which the Apollo Speed can take the Nordschleife’s 100 corners at blazing speeds. At full clip, around 225 miles per hour, the Apollo is said to produce 3,000 pounds of downforce, enough to drive upside down in a tunnel, in theory.

The Nürburgring Nordschleife has become the de-facto proving ground for modern production sports cars. The 12.9-mile toll road includes 33 left turns and 40 right turns — some of the most treacherous curves in motordom. It’s also got a decades-old racing mystique, and public accessibility, which have made it a prominent entry on gearhead bucket lists the world over. That’s why beating the ‘ring, and making a YouTube video to prove it, is about the best marketing move a sports car company can make, even one that plans to roll only a double-digits’-worth of cars out of its production facility.

Germany’s Sport Auto magazine is the keeper of the Nürburgring lap times, which are unsanctioned by any racing organization and thus still technically unofficial. It may seem like a frivolous way to spend a few gallons of gas, but a video showing Gruber’s skill behind the wheel proves why feats of speed will always be part of the automotive world. Discuss.