With Detroit reeling and Toyota busy trying to explain away some rather egregious design flaws, it might seem like a... 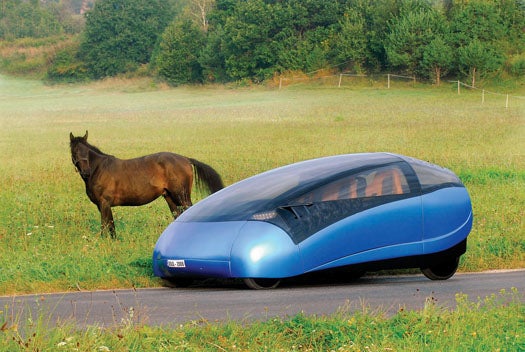 With Detroit reeling and Toyota busy trying to explain away some rather egregious design flaws, it might seem like a ripe time for an innovative car company to introduce a mind-blowing, paradigm-shifting idea to the automotive world. This is not that idea. Hungarian car company Antro’s ambitious reinvention of the modern auto involves creating a six-seat hybrid-solar car that splits into two three-seater cars. Or a pair of three-seater cars that combine into six-seaters, depending on how you look at it.

Without a doubt it’s an interesting idea, and as such the company has poured 1.5 million euros into developing the concept into a working prototype. According to the company, solar panels on the roof could deliver enough power to propel a single three-seater 12.5 miles before the other power source needs to kick in, and its small design would certainly make it no less viable a city car than the Smart Cars that dot the curbs of many European burgs. But a car that docks with other cars? The benefits are dubious, to say the least.

To answer (or not) a few of your questions: we’re not really sure exactly how this automotive merging is supposed to take place (nose-to-tail? side-by-side?). And we’re not really sure if the car will be sold as a set of two or as individual three-seater units. But now we’re getting ahead of ourselves; we’d actually be pretty surprised to see something like this go to market, Voltron-esque style points notwithstanding.