Your Hybrid Car Is Hogging All the Rare Earth Metals

So it turns all those hybrid car owners who turn their environmentally conscious noses up have an unexpected caveat to... 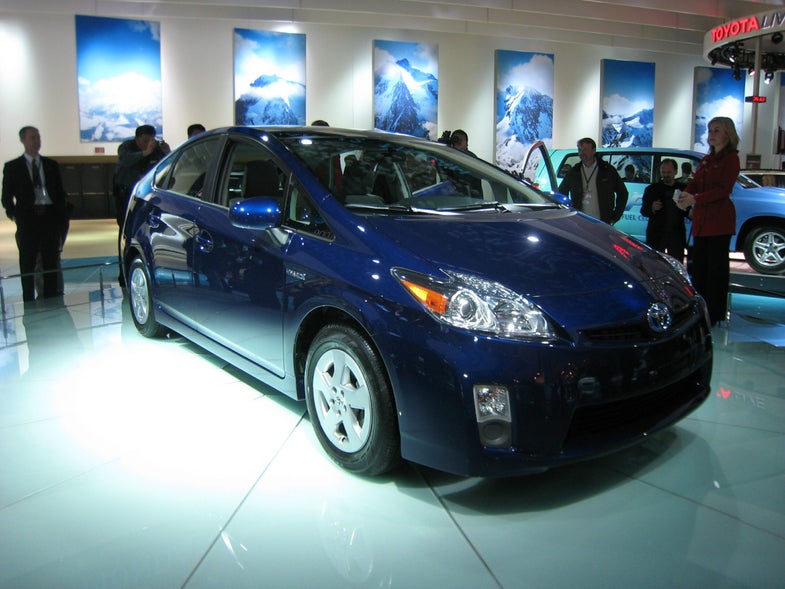 Toyota chose Detroit to deliver the world premiere of the all-new Prius, now in its third generation. In a press conference Monday morning Toyota group vice president Bob Carter said the new Prius would get an estimated combined 50 mpg, up from 41 mpg for the first generation. The car looks essentially the same as the previous generation, but look closely and you’ll find minor tweaks to the corner edges, the roof, and the spoiler. The powertrain, however, has been largely reworked, with a new gas engine and electric motor, inverter, and generator. Another interesting twist: A solar roof now runs a ventilation system that cools the car when it’s parked. Seth Fletcher
SHARE

So it turns all those hybrid car owners who turn their environmentally conscious noses up have an unexpected caveat to their green-ness–their cars are sucking up rare earth metals at a disturbing rate.

Rare earth elements take up 17 slots on the periodic table, and are named not for their overall scarcity (they’re actually quite common in trace elements throughout the Earth’s core) but for the relatively uncommon minerals in which they were originally found; few rare earth elements exist in pure elemental form naturally.

Reuters spoke with commodities trader and “strategic metals expert” Jack Lifton, who claims hybrids such as the Prius uses more rare earths than any object in the world. Neodymium and lanthanum–used in allows in a hybrid’s batteries and electric motor’s magnets–could become increadibly scarce or even disappear altogether within the next several years. Each Prius uses 2.2 pounds of neodymium in its electric motor magnets, and 20-30 pounds of lanthanum in the batteries. And those amounts will only go up as the Prius’s powertrain continues to evolve for more efficiency.