A former IBM engineer says his latest invention can turn regular cars into plug-in hybrids for between $3,000 and $5,000. He could be on to something. 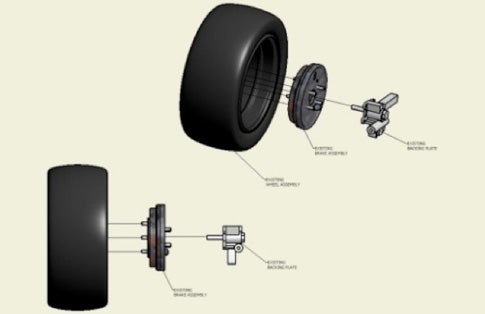 It fits into a wheel hub and can double a car’s fuel economy. That’s the claim of Dr. Charles Perry, who says his plug-in hybrid retrofit kit can save America 120 million gallons of fuel per day. Big talk. But then, inventors betting on revolutionary uphevals need to talk as big as they think. The former IBM electrical engineer designed the kit to transform existing automobiles into hybrids by placing an electric motor inside each wheel. Perry recently took first prize for his invention at a green energy competition at the Tennessee Technology Development Corp. The plan is to develop the kit into a product selling for between $3,000 and $5,000.

As part of the prize, Perry received a $50,000 grant, which will be matched by Palmer Labs LLC of Reston, Va., whose goal is to commercialize the invention.

Perry reiterates a common statistic that 80 percent of US drivers make daily trips of fewer than 30 miles at 40 miles per hour or slower. Such performance, he says, can be achieved by way of his 10-15 horsepower electric motors, which would be powered by extra batteries installed in a car’s trunk.

Perry will work with the Tennessee Technological University on a prototype, then plans to fit 30 state-owned vehicles with the kit for testing. The final stage would see the kits manufactured by Palmer Labs within three years.