You Built What?! The Shopping Go-Kart 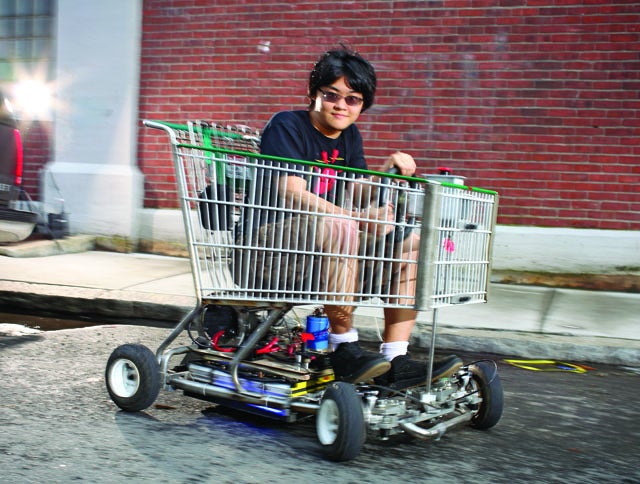 Who needs brakes? When you’re converting a junk-stuffed shopping cart into an electric joy-ride-mobile, they’re the last thing you worry about. MIT undergrad Charles Guan’s LOLriokart—the name is a mash-up of Web and videogame-speak—grew out of his membership in the MIT Electronics Society, a student engineering club. With no plans to build a vehicle, he looked around the club’s shop and spotted the shopping cart, some discarded wheels and an electric engine normally used in high-performance golf carts. He cut off the shopping cart’s wheels, stripped out the basket underneath, and designed mounting plates for the motor, batteries and electronics.

Machining metal wasn’t new to Guan, who has built a number of robots as well. But trouble started when he got to work on the specialized electrical components, especially the controllers that manage the current flowing from the battery to the motor. “I managed to blow up my circuit a good four times before getting it to work,” he says.

Guan ultimately did decide to add brakes, and now he has a set that works. Initially he tried cannibalizing the kind used in kids’ electric scooters, but his 250-pound rig fried them on the first go. He’s found in test drives that collision risk is minimal anyway. “When you’re driving something this weird,” he says, “everyone tends to stay away from you.” 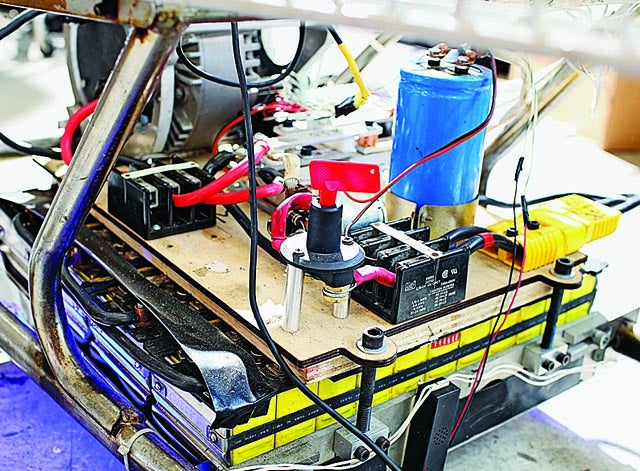 Guan juices up the batteries overnight using a low current to avoid overcharging them. 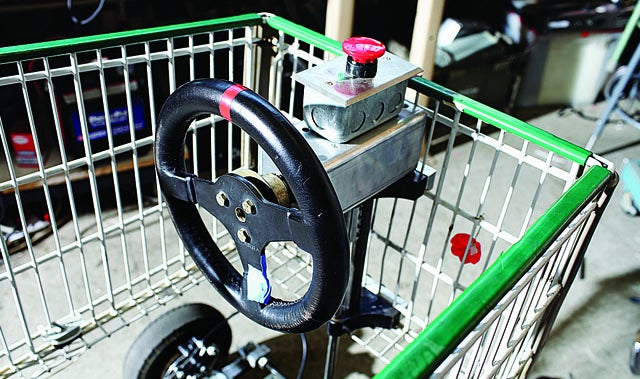 The big red button directly in front of the steering wheel is an emergency fallback that cuts power to the motor.

DREAM HANDLING
Guan controls the rear-wheel-drive LOLriokart through a custom-made steering system. The batteries, motor and drivetrain sit at the wheel line and weigh 160 pounds, giving the cart a low center of gravity even when he’s riding inside.

UNDEAD BATTERIES
Guan found a set of nickel-cadmium batteries donated for a solar-car project at MIT. They had been lying around for years and were partially dead because of internal crystal growth, so he used a variation of a process called zapping: He hooked each one up to a lead-acid battery and pumped it full of current, frying the crystals and revitalizing the batteries. Guan has already done a test run of six miles, and he calculates that the cart could travel nearly twice that. An hour of charging with a high current can revive the batteries, but he prefers to charge them overnight with a low current.

RUNAWAY SPEED
According to Guan’s math, given its weight and motor power, the cart could have gone 45 mph. That seemed a little risky, though, so he switched in a smaller motor sprocket, which cuts the rate at which the chain turns the rear axle. Using a go-kart throttle, he can vary between a gentle walking pace and 30 mph.

SLOWING DOWN
Guan had been stopping Fred Flintstone–style, jamming his heels onto the pavement through a gap in the bottom of the cart. Once, his quick footwork helped him avoid being hit by a train. But he recently installed some mountain-bike disc brakes—mostly to cut down on shoe wear. 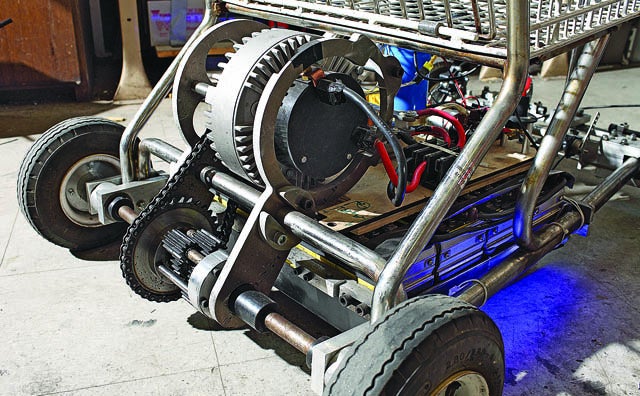 During an early test in the shop, the cart sprang to life and a wheel burned a hole in the floor.

Projects
massachusetts institute of technology
October 2009
you built what?!