Here’s an innovative application for augmented reality: telling you how to do stuff you should already know how to do.... 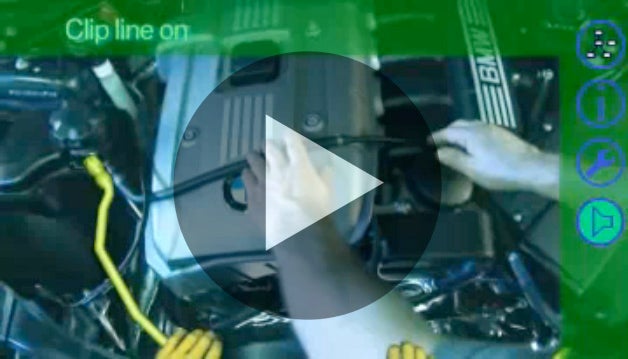 Here’s an innovative application for augmented reality: telling you how to do stuff you should already know how to do. BMW have developed a concept for AR glasses that can assist their own mechanics in performing maintenance on the company’s high-performance cars. The glasses read the field of view, point out the part that needs replacing, the screw that needs turning, or the cap that needs tightening (and even tells users which way to turn it). An audio track talks the mechanic through the repair, because what kind of knuckle-busting, touch-as-nails grease monkey couldn’t use a gentle voice encouraging him or her through a radiator replacement?

Augmented reality has the potential to make so many things better, or at least easier. But should it become a replacement of basic human knowledge? Computers already do a good deal of diagnosis in the auto shop. If they are going to walk mechanics through every aspect of their jobs, it seems we can really dispense with the mechanic altogether.

But for the home mechanic, this kind of AR tech really has some potential. When the car starts making “that noise” again, the owner could simply link his car to the manufacturer’s central diagnostic computer (via a built in wireless connection, which is already coming standard on some models). After the computer diagnoses the problem, parts could be automatically shipped to the customer and the proper instructions downloaded right to the owner’s AR goggles.

With the proper parts in hand and step-by-step audio and visual instructions, even the most mechanically challenged among us should theoretically be able to swap a gasket, replace and tighten a busted belt, or even refill the windshield wiper fluid. Naturally, manufacturers have no economic incentive to produce something like this, as it would cut into revenue generated when customers bring their cars to the dealership for repairs. But if we really want to use AR to make our lives better, rather than to help our mechanics think less, we have to start somewhere.