Robots That Eat Bugs and Plants for Power 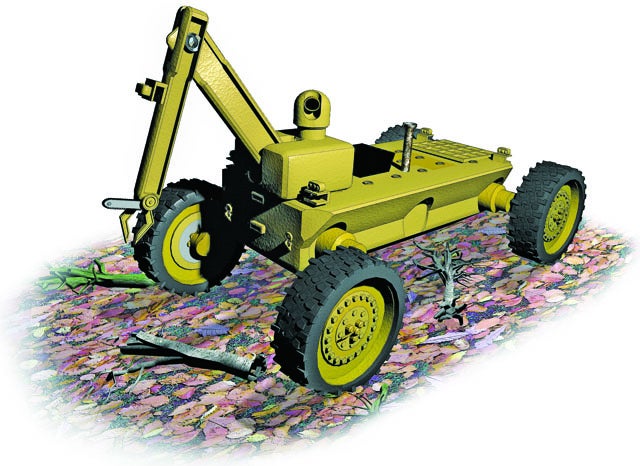 No matter how intelligent a robot might be, it’s nice knowing you can pull its plug to halt the anti-human insurrection. Whoops, not anymore. A new cohort of ‘bots that make energy by gobbling organic matter could be the beginning of truly autonomous machines.

This first wave of biomass-munching robots has been designed with safe, slow, long-term vocations in mind, such as surveillance, clearing land mines, or monitoring sewer pipes and other locales too dark for solar cells. Take EcoBot II, the tambourine-size fly-eating machine built by Bristol Robotics Laboratory in England. Engineers hand-feed this robot insects, which it digests in a microbial fuel cell—essentially a tank of sludgy bacteria and oxygen—that converts the insects into electricity. An eight-fly meal can drive it up to seven feet.

EATR (for Energetically Autonomous Tactical Robot), a car-size military reconnaissance ‘bot, will forage more actively. The Darpa-funded concept vehicle from Robert Finkelstein of Robotic Technology in Washington, D.C., will use cameras and radar-like sensors to spot twigs and leaves. It will then chop up food and toss it into a combustion chamber built by engineer Harry Schoell (a 2008 PopSci Invention Award winner). Schoell’s steam engine runs on anything that burns and will get EATR around 100 miles per 150 pounds of vegetation. Both the EcoBot and EATR teams are working on software to help the robots conserve energy during lean times, and a full EATR prototype should be scavenging by 2011.

For those inclined to fear an autonomous, chainsaw-wielding robot, take comfort that its programming will restrict it to only grabbing morsels that match the shape, color and texture of plant life. “It won’t consume a chocolate layer cake, because it won’t recognize it as food,” Finkelstein says. “And it certainly won’t go running after animals.”