Plug In Your Prius

A number of companies want to help you convert your hybrid 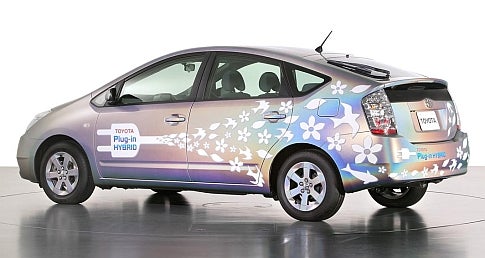 Dear EarthTalk: I understand that Toyota is planning to sell a plug-in Prius that will greatly improve the car’s already impressive fuel efficiency. Will I be able to convert my older (2006) Prius to make it a plug-in hybrid vehicle? — Albert D. Rich, Kamuela, Hawaii

Toyota is readying a limited run of a plug-in Prius, which can average 100 miles per gallon, for use in government and commercial fleets starting in 2009. Toyota will monitor how these cars, which will have high-efficiency lithium-ion batteries that haven’t been fully tested yet, will hold up under everyday use.

The regular Prius relies more on its gas engine, switching to (or combining) use of the electric motor in slow traffic, to maintain cruising speed, and when idling or backing up. The car doesn’t need to plug in because its battery stays charged by the gas motor and by the motion of the wheels and brakes. Essentially, a plug-in version of the Prius reverses the roles of the two motors under the hood. The plug-in will primarily use its electric motor, allowing commuters to go to and from work every day fully on the electric charge, saving the gas engine for longer trips that exceed the distance the car can go on electricity alone.

Toyota has made no announcement yet as to when consumers will be able to buy a plug-in; that depends largely on the results of the field test of the fleet version. But owners of a current or past model don’t need to wait. Those with automotive mechanical skills can convert their Priuses to plug-ins themselves.

“The conversion is an easy DIY project that you can do for about $4,000, if you choose to use sealed lead acid batteries,” says Houston-based Jim Philippi, who converted his Prius last year, using instructions he downloaded for free from the Electric Auto Association’s PriusPlus.org website. Philippi recommends that DIYers consult Google’s RechargeIT.org as well for useful background information.

One potential worry about conversions is whether or not Toyota will honor the warranty that came with the original vehicle. The California Cars Initiative (CCI), which has converted several hybrids to plug-ins for research and demonstration purposes (sorry, they’re not for sale), says the carmaker needs to clarify the matter, since hybrid cars typically have four or five separate warranties. There is legal precedent, CCI says, that modifications cannot completely void warranties — only the part(s) affected by a retrofit.

If you’re looking to convert, keep in mind that such a move is not about cost savings, as it will take some time for fuel savings to justify the upfront cost of even a DIY effort. Most people interested in such a conversion are doing it for the sake of the environment, not their pocketbooks.