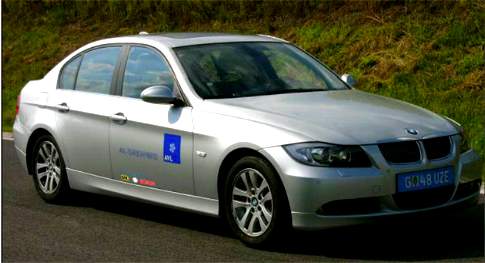 Hybrid cars may be a favorite among commuters looking to save fuel, but they’re yet to appear on a single driving enthusiast’s bucket list. It’s no secret why: A 2009 Prius gets from zero to 60 mph barely faster than a plumber’s van.

How do you make hybrid cars a little rougher on the adrenal glands without sacrificing the good fuel economy and low emissions? Engineers at Austrian tech firm AVL took a page from the motorsports playbook, using a turbocharger to boost the performance of a standard gas-electric hybrid.

The result is the AVL Turbo Hybrid Concept, a sneaky BMW 3-Series prototype said to turn out a 10 percent increase in fuel economy, along with an unquantified boost in overall performance. Details are few, though the company says it recently demonstrated the concept’s potential both on the test track and in real-world driving.

The point is to reduce the size and fuel consumption of the hybrid’s internal-combustion engine, while eking out higher output from its electric-drive system by way of specialized control systems. If the project succeeds, hybrid cars could find themselves closer to challenging carmakers’ latest round of torquey, efficient and powerful diesels now prevalent on European roadways.

And that means hybrid drivers on Germany’s autobahn might one day venture out of the right lane to pass a plumber’s van or two. Dare to dream.