It’s a bird! It’s a plane! It’s a Nissan? Though limited to terrestrial travel, the concept Land Glider automobile from... 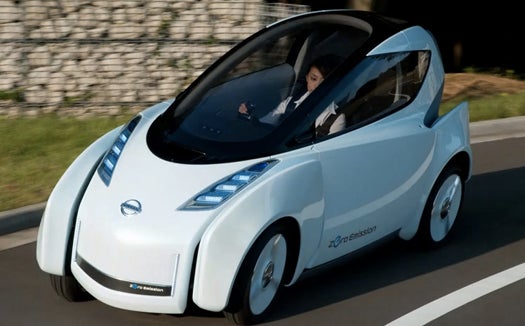 It’s a bird! It’s a plane! It’s a Nissan? Though limited to terrestrial travel, the concept Land Glider automobile from Nissan banks like an airplane, tilting into corners, giving drivers the sensation of flying. But, the likenesses to aviation don’t end there. The two-seater orients driver and passenger in tandem — one in front and one in back — and rather than a steering wheel, the Land Glider has airplane-style, computer-guided yoke controls. 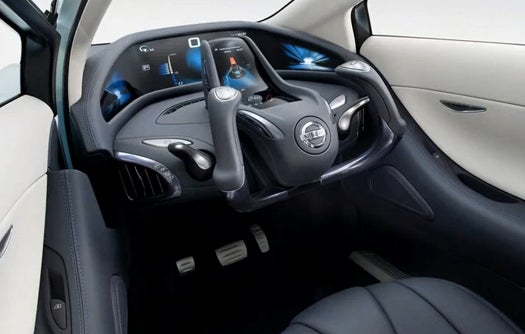 Inside the Land Glider

The controls of the Land Glider resemble those of an airplane rather than a car.

Inspired by glider aircraft and motorcycles, the Land Glider is a lean 3.6 feet wide and ultra-lightweight, allowing its zero-emissions, all-electric motor to whisk it along with decent pep. Though its tight profile and narrow frame should make it easy enough to park, video cameras replaced by cameras feeding to dashboard monitors give the driver plenty of perspective on the vehicle’s surroundings.

But the coolest features by far are the tilting wheels and leaning fenders that allow it to lean up to 17 degrees as it negotiates turns, assisted by the steering computer that determines optimum tilt for the current speed and trajectory. The Land Glider goes on display at the Tokyo Motor show October 24, but you can sneak-peek it below.