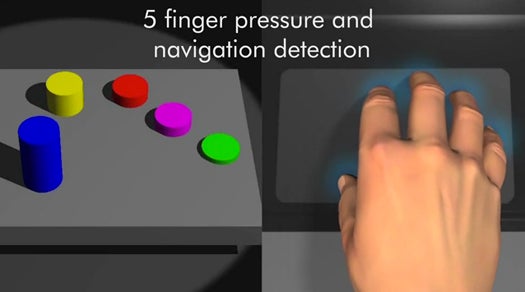 Trackpads have been a remarkably simple solution to what could’ve been a complicated problem: translating the mouse to a laptop. But pushing that technology any further requires some lateral thinking, and the next dimension laptops might venture into is detecting pressure from your fingers, which would open the door for a larger set of commands. It would change how we navigate, and we might be almost there.

You can watch the video below to get a better sense of exactly how this sort of thing works, but it breaks down like this. You don’t click things; there is no way to click things. Instead, the trackpad on your laptop monitors all five of your fingers, as well as how hard they’re pressing on the pad. A set of commands based on how you move your fingers lets you move through the operating system; those commands could give you more control over your experience. (Push on top of trackpad to nosedive in a plane, to use a potential, simple example in gaming)

As Gizmodo points out, this isn’t the first example of the tech we’ve seen, but it might be the most visible. Cutting clicking from PCs might not just be more efficient, but also more logical. We’ve been moving toward that ever since the first mouseless devices, and eliminating everything except finger motion makes sense as a progression. Less movement via the trackpad means less steps to make something happen in Windows 8, which means increased efficiency (after you get used to the weirdness of it, probably).