Anglophile nerd alert: You can now download a geographically accurate, scaled terrain model of Great Britain for Minecraft, thanks to one hardworking summer intern at Ordnance Survey, the country’s national mapping authority.

It took Minecraft-loving intern Joseph Braybrook two weeks to reproduce 86,000 square miles of British geography using Ordnance Survey’s open data. Minecraft calls itself “a game about breaking and placing blocks,” and this world contains many–it’s made up of more than 22 million blocks.

Plenty of real-life (and fiction-inspired) structures and cities have been recreated in Minecraft (plus this great working graphing calculator), but Ordnance Survey believes theirs is the biggest dog in the map-nerd pack. “We think we may have created the largest Minecraft world ever built based on real-world data,” according to Graham Dunlop, who runs the agency’s Innovation Lab. 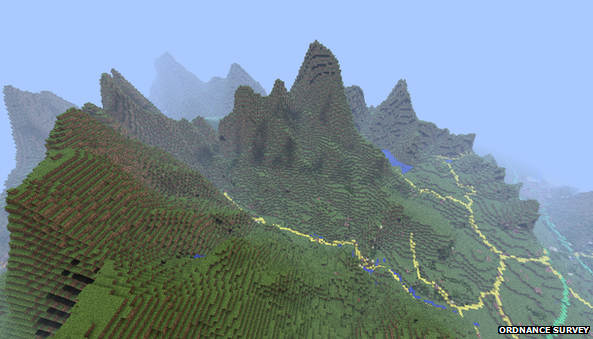 “All players will enter the virtual 3D world atour head office in Southampton and from there can add their own recreations of real-life features – such as landmarks like Stonehenge or add imagined environments such as Hogwarts castle,” the organization explained in a statement. Northern Ireland, the Channel Islands and the Isle of Man aren’t included, because they don’t fall within Ordnance Survey’s mapping domain, so someone else will have to take up that cause.

Players can build whatever their gamer hearts desire upon the blocky British landscape–whether that’s a full-scale model of Harry Potter’s favorite places, a realistic imitation of London’s streets or something entirely of their own creation. Or they could just zip around being a digital tourist, visiting the most obscure destinations in the British Isles without leaving their computer. “For now, it’s our gift to the world of Minecraft,” Dunlop told The Guardian.

The lesson here: Interns make the world go ’round. Download the data here.