Transit officials are afraid a custom level of Montreal's Berri-UQAM metro station will cause panic among riders. 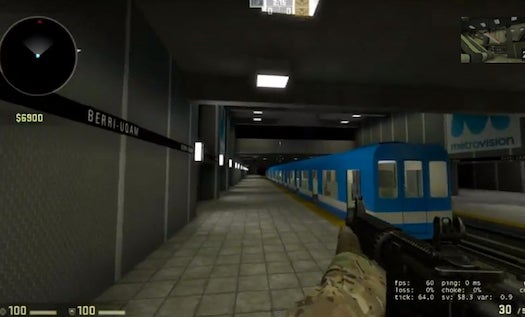 If you give a gaming community the tools to create a custom level, or “map,” you’ll end up with lots of fun stuff. Some people will even recreate real-life places, which is what Diego Liatis and friends did with Montreal’s Berri-UQAM metro station. But the Société de transport de Montreal is worried the level will cause panic among straphangers presumably because it gives would-be evil-doers a handy guide to the underground system. The agency is now threatening a lawsuit if the custom level gets released.

The level was made for the military-style shooter Counter-Strike: Global Offensive, which is probably part of the problem. (It stands to reason that the transit authority wouldn’t be up in arms over a game that didn’t involve shooting.) Liatis told Le Journal de Montreal that he asked for permission to create and release the map to the public, was denied, then went ahead and did it anyway, figuring it was a public place and his right to do so. Officials felt differently, and sent him a letter threatening legal action if he made the map available publicly, saying trademarked parts of the metro couldn’t be used.

The transit officials, according to The Escapist, are concerned about what someone with bad intentions could do if they explored the metro system using this map:

Frédéric Denis, a programmer on the project, described the situation as “ridiculous” and said that terrorists who want to learn the details of the station’s layout can just go there and ride around on the subway, like he did.

If that’s the extent of officials’ concerns, it seems like there’s not much to them. (For the record, they haven’t commented beyond admitting the potential legal action.) The level’s creators rightly point out how they made the metro stop in the first place: by going down there and looking around. No one is being stopped from doing that, and the game doesn’t reveal some secret important information that could be detrimental to the public. If the transit authorities think it does, they’re just demonstrating that they don’t understand what goes into making a level like this: simple observation.

Still, a lot of interesting issues are involved here. It’s not clear yet if this will go to trial, but what would be brought up if it did? A couple issues come to mind: Can a custom level design be considered protected speech? Does it break copyright to have the metro’s likenesses in a custom game? Those are questions for lawyers to sort out.

Then there’s the question of would the game actually cause panic? That seems unlikely. For one, gamers have recreated real-life places before–there have even been Counter-Strike recreations of metro stations, like this map of the Budapest metro. Either officials in Budapest don’t know about the map or they know about it and don’t care. It’s not like the level teaches you anything you can’t teach yourself, just by going there and opening your eyelids.