Temple Run 2, Sequel To The Super-Popular Mobile Game, Is Out

This was the premise for the first Temple Run, a hit mobile game: Your character has stolen an idol from... 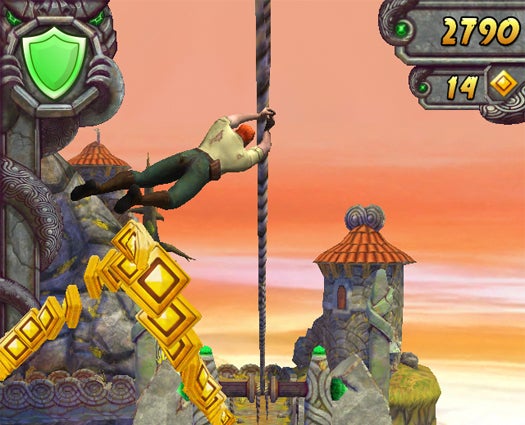 This was the premise for the first Temple Run, a hit mobile game: Your character has stolen an idol from a temple, and has to outrun temple guardians (monkey-beast things) while avoiding obstacles and nabbing coins, for as long as possible. Now, just-released for iOS, is Temple Run 2, and that description pretty much sums it up, too.

Here’s what’s different. There’s just one big monkey this time. The graphics are better, and the temple you run through is a little more expansive, featuring waterfalls and clouds this time around. The path you run curves slightly, unlike the first Temple Run‘s totally liner path, but that doesn’t affect gameplay too much.

For the most part, the game sticks to the formula that made it a success. Even the power-ups you gain by gathering coins, where you’d think the developers might be able to add some features pretty easily, looks almost untouched. Not that all that’s a bad thing: If you liked the first Temple Run, there’s a solid chance you’ll like Temple Run 2, seeing as it’s a better-looking version of the first game.

It’s free in the App Store, with an Android version coming next week, so you don’t have much to lose–except time, if the game hooks you in.