Watch This Guy Remix Super Mario By Glitching It Out 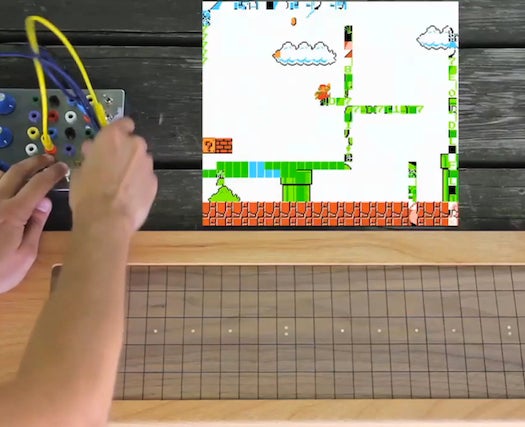 Chris Novello is working on some hardware called Illucia, a system that can route information between computer programs. What does that look like? Well, let him show you. Here he takes Super Mario, jacks Illucia into it, and starts messing with the game’s RAM, controlling it all with a multi-touch surface called the Soundplane. He explains:

I begin by playing the game as one normally would, just using buttons on illucia.. but I also have access to the game’s memory, so I use the Y axis on the Soundplane to alter the value in the memory address that determines Mario’s Y position onscreen. This is how I make Mario fly and hover during the playthrough.

Novello calls it codebending, and the final result looks like a dub-step reinterpretation of the classic game. He continues:

Also, before I start playing, notice that I flip a switch on illucia. This triggers recording — not video, but actually recording the entire memory state of the NES for each game frame. Because I’m saving the game ~30 times a second (and keeping log of all saves) I’m able to go back to any moment in Mario’s life. Sort of like a Super Mario time machine.

So then I use the X-axis of the Soundplane to sweep through the timeline of Mario’s universe. Not only that, but the Soundplane is multitouch, so I use a second finger to specify start and endpoints in a playback loop. This is similar to the way samplers and granular synths work, but for recordings of the entire memory state of the NES rather than audio data. Conceptually, it is like Super Mario meets Groundhog Day. Mario’s universe computer / time machine gets caught in hellish loops.

Poor guy. Not going to be easy to save the princess like that.