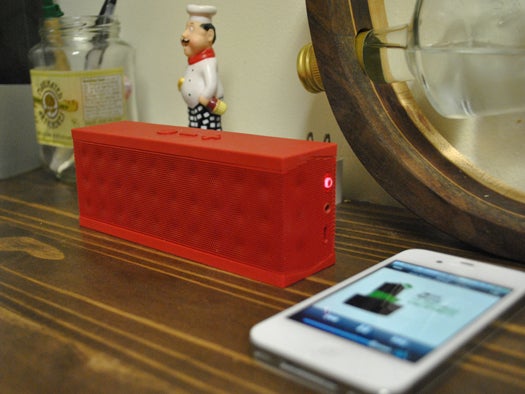 To get a full spectrum of viewpoints on the Jawbone Jambox, a tiny–seriously tiny–portable speaker, we asked two separate writers to scrawl down their thoughts. The first comes from Michael Berk, an writer at audio/videophile publication (and PopSci sister pub) Sound+Vision, who lends his expert viewpoint. The second comes from Dan Nosowitz, a writer here at PopSci, for a view at regular-person usage. Spoiler: they both really like it.

Even audiophiles need to take their music on the move now and again, and venturing out of the sweet spot, whether you’re on the road or just heading out to the lab to solder together some custom cables, shouldn’t mean giving up on sound quality altogether. Much of the action lately has been Apple-centric, using Apple’s AirPlay wireless standard, but not everybody’s an Apple enthusiast. Luckily, there’s been a healthy amount of innovation on the Bluetooth front, with a growing group of solid little speakers managing to satisfy the oft-opposing demands for portability and actually good sound.

The Jawbone Jambox is one of the clear front runners in that bunch. Packing a feature set that manages to rival a number of bigger products (apps, easy firmware updates over USB, personalization options ranging from alert sounds to configurable buttons), the Jambox crams a pair of 1 1/4-inch drivers and a surprisingly capable passive bass radiator into a minuscule–even stylish–package. Add to that the well-engineered UI (the thing talks to you to let you know its Bluetooth status; a welcome change from the watch-the-speed-of-the-flashing-LEDs paradigm) and you have an ideal traveling companion, especially if you’re the sort of listener who doesn’t enjoy wearing headphones–or if you’d just rather share.

The Jambox won’t fool you into thinking you’re listening to a pair of towers, but it puts out the kind of sound that’ll surprise your dinner party guests or officemates in a big way, especially if you stick to material that highlights the little unit’s strengths, notably midrange and treble output (the low end is admirable, but not really convincing). Voices and solo acoustic instruments work particularly well: John Cale’s heartbreaking piano and vocal take on Nico’s “Frozen Warnings” (from the Nico/Icon soundtrack) made me forget I was listening to a device that’s less than six inches long.

The Jambox even does a good job with well-recorded rock: firing up King Crimson’s “The Construkction of Light” (from Level Five) at the office quickly brought over a crowd of curious colleagues, all of whom were surprised to find that the tiny red brick was putting out such impressively solid performance.

There are some limitations, of course. It falls apart a bit with anything involving dense bass and percussion, especially (as is the case with so many small speakers) contemporary bus-compressed, heavily multiband-limited rock. Grinderman 2 was hardly tolerable, and Animals for Leaders’ impressive double 8-string guitar assault on the “Circular Sea” (from the new Weightless) didn’t fare well at all. But those sorts of things are just beyond the reach of such a small device, and so long as you keep the levels low, you won’t be disappointed. 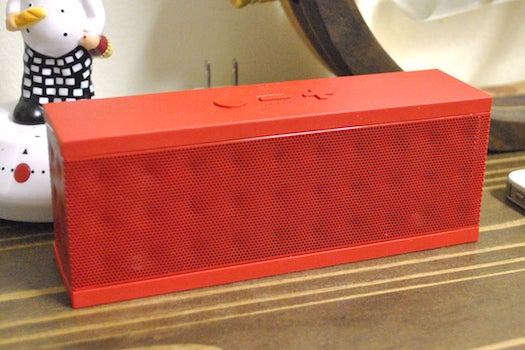 Love the little bumps in the grille.

I have my Jambox set up in my kitchen, in between the seltzer maker and the food processor. It is the perfect kitchen speaker. Let me count the ways:

This isn’t some marvel of engineering that can replace a stereo or anything. But given its size, I’m totally impressed with the Jambox. My kitchen would feel very quiet without it.